In the markets:   U.S. Markets:  Stocks fell after the Federal Reserve dashed market hopes for an impending “pivot” in monetary policy—a slowing or pause in rate hikes.  The technology-heavy NASDAQ Composite was hit particularly hard as growth stocks declined more than value stocks, and many tech bellwethers had largely disappointing earnings reports.  The Dow Jones Industrial Average ended the week at 32,403, a decline of -1.4%.  The NASDAQ shed over 627 points falling to 10,475—a decline of -5.6%.  By market cap, the large cap S&P 500 retreated -3.3%, while the mid cap S&P 400 fell ‑1.2% and the small cap Russell 2000 ended the week down -2.5%.

Commodities:  Major commodities finished the week to the upside as well.  Silver led the way with an 8.6% surge to $20.78 per ounce, while Gold added 1.9% to $1676.60.  West Texas Intermediate crude oil gained 5.4% closing at $92.61 per barrel.  The industrial metal copper, viewed by some analysts as a barometer of world economic health due to its wide variety of uses, finished the week up 7.5%.

U.S. Economic News:  The number of Americans filing for first-time unemployment benefits dipped last week, remaining near pandemic-era lows.   The Labor Department reported that initial jobless claims fell slightly to 217,000.  The reading exceeded economists’ forecast of 220,000 new claims.   The biggest increase in new claims occurred in California and Oregon.  The only states to report a sizable decline in unemployment filings were Florida and Kentucky.  Meanwhile, the number of people already collecting unemployment benefits rose by 47,000 to 1.49 million.  That number remains near a 50-year low.  Analysts note that the low number of claims continues to give the Federal Reserve the green light to continue on its path of raising interest rates.  Nancy Vanden Houten of Oxford Economics wrote, “The job market remains tight, a key reason that the Fed plans to continue to raise interest rates.  We don’t expect a significant rise in claims or unemployment until we enter a recession in 2023.”

The U.S. economy gained a surprisingly strong number of new jobs last month, a sign the nation’s labor market remains strong.  The Bureau of Labor Statistics reported 261,000 new jobs were created, exceeding the consensus of 205,000.  Although the increase was the smallest since April of 2021, it was still strong by historical standards.  Employment rose last month in every major part of the economy.  The health-care industry added 53,000 new jobs to lead the way, followed by professional businesses (43,000), leisure and hospitality (35,000) and manufacturing (32,000).  However, not everyone was pleased by the good news—especially the Federal Reserve.  As Gus Faucher at PNC Financial Services writes, “This actually makes a recession more likely because it means the Fed is going to keep raising interest rates.”  Fed officials worry the tight labor market is driving up wages and making it harder for them to reduce wages to pre-pandemic levels of 2% or so.

The number of job openings in the U.S. rose again in September, a sign that the scorching hot labor market has yet to cool off.  The Labor Department reported job openings rose to 10.7 million, an increase of 400,000 from August.   Analysts look at the number of job openings as a way to assess the strength of the labor market and the broader economy.  Although companies still list a high number of open jobs, the total has fallen off from a record 11.9 million in March.  The high number of available openings is leading to higher wages and contributing to already high inflation, analysts say.  Katherine Judge, economist at CIBC Economics wrote in a note,” The Fed is looking for a more persistent cooling in order to add some slack to the labor market, and this is a step in the wrong direction.”  Meanwhile, the number of people who quit their job dipped slightly to 4.1 million—which is still unusually high.  Quits have topped 4 million for 15 months in a row.  Analysts look at the “quits rate” for the underlying strength in the labor market.  It’s presumed that one would only quit a job in favor of a more lucrative one.

The Federal Reserve hiked interest rates for a fourth consecutive time and signaled rates were likely to go higher than previously forecast.  In a widely expected move, the Federal Reserve hiked its key interest rate by 0.75% to a range of 3.75-4%--its highest level in 15 years.  Furthermore, in its statement the Fed said it expects to continue with further rate hikes “until they are sufficiently restrictive”.  The Fed also said it will “take into account the cumulative tightening of monetary policy, the lags with which monetary policy affects economic activity and inflation, and economic and financial developments.”  While the market initially rallied on the announcement, it sold off when Powell said the central bank’s benchmark rate was likely to end up “higher than previously expected.”  The Fed’s last forecast estimated its benchmark rate would top out in a range of 4.5%-4.75%.  Powell said the window to achieve a “soft landing” is narrowing.  A sizable number of economists are calling for a recession next year.

Manufacturing activity across the nation held steady in October, according to a pair of reports released this week.  The Institute for Supply Management (ISM) reported its measure of U.S. manufacturing activity fell 0.7 points to 50.2, slightly exceeding the consensus of a drop to 50.0.  It was the lowest reading since May 2020, shortly after the pandemic took hold.  In the report, the index for new orders remained in contraction at 47.1, while the production index rose 1.7 points to 52.3.   Of note, the price index dropped 5.1 points to 46.6—also the lowest reading since the pandemic.  ISM noted “pricing power is shifting back to the buyer” in its summary.

In a separate report, S&P Global reported its index of U.S. manufacturing ticked up to 50.4 in October, but this is down from 52 in September.  Timothy Fiore, chair of the ISM factory business survey stated manufacturing is slowing down and could soon enter contraction territory, but that doesn’t mean there will be a recession in the U.S.  “I don’t see a collapse of new orders.  I don’t see a collapse of the PMI,” Fiore said.  However, some economists aren’t as optimistic.  Oren Klachkin, economist at Oxford Economics wrote in a note, “Recession jitters among manufacturers won’t disappear any time soon…manufacturing will endure more pain as demand weakens at home and abroad while prices stay high and interest rates remain fairly elevated.”

International Economic News:  Canada's government set out billions in new spending to support low-income workers and clean energy technologies among other measures, dipping into a tax windfall to provide relief to those hit hardest by fast-rising prices.   Analysts said the new spending was modest enough to avoid dramatically altering the inflationary outlook, though it fell short of the fiscal restraint needed at time when prices are rising faster than they have in decades.  Finance Minister Chrystia Freeland outlined C$11.3 billion ($8.2 billion) in new spending this year and next, adding to C$11.6 billion of measures laid out since the April 2022 budget. But Freeland sought to reassure an inflation-weary nation that "We know how important it is right now ... not to pour fuel on the flames of inflation."

Across the Atlantic, the Bank of England announced its biggest rate hike in 30 years, lifting its key interest rate to 3%.  The central bank raised its key rate by 75 basis points after consumer price inflation came in at a 40-year high in September.  The move came even after the bank predicted a two-year economic contraction through June of 2024, which would be the longest recession since at least 1995.   Andrew Bailey, governor of the Bank of England stated, “If we don't take action to bring inflation down, it gets worse.”   The rate increase is the Bank of England's eighth in a row and the biggest since 1992.

On Europe’s mainland, more than nine out of ten people in France are concerned about the level of inflation, a survey by French analytics company Odoxa showed.  In addition, economic morale is at its lowest with 78% of respondents saying they are “less confident” in their nation’s economy.  President of Odoxa, Gael Sliman, told BFM Business that the French believe that inflation is twice as high as the level reported by INSEE, the official French statistics agency.  More than a third of respondents believed inflation was above 15%--almost three times what official government data showed.   In addition, 46% of respondents said they have already used up all their savings or taken out one or more loans to meet daily expenses.

German Chancellor Olaf Scholz is making an in-person visit to China this week, a move that drew criticism that Germany’s economy is too reliant on China.  Frederick Kliem, E.U. and international relations expert from the S. Rajaratnam School of International Studies stated, “Undoubtedly, Germany’s dependence on China is too great on at least three levels: dependency on the consumer market, on China as a production base, and on import of some critical products, such as rare earth elements.”  Furthermore, he added, Germany must reduce its dependency so that it is neither susceptible to blackmail by Beijing, nor unable to implement sanctions.

In Asia, Barclays cut its economic growth forecast for China next year to 3.8%, a move based partly on a drop in global demand for Chinese-manufactured goods.  As their economics teams in the U.S. and Europe are now forecasting recessions next year, they now expect China’s exports to drop by 2-5% in 2023, versus previous expectations for 1% growth.   “China’s share of global exports has been shrinking this year,” the analysts said.  “Foreign companies are seen to have shifted their orders away from China to its Asian neighbors, including Vietnam, Malaysia, Bangladesh and India, for the production of some key labor-intensive goods.”

Japan's economy is expected to have slowed markedly in the third quarter as global recession risks hurt external demand while rising inflation and a weak yen's impact on imported prices weighed on consumers’ spending power.  A Reuters poll of 18 economists forecast the world’s number 3 economy grew at an annualized rate of 1.1% in the third quarter—down sharply from the 3.5% expansion in the second.  The significant slowdown in part highlights the harsh impact on Japan from the yen's slide to 32-year lows against the dollar, which has exacerbated the cost-of-living strains by further lifting the price of everything from fuel to food items.  Prime Minister Fumio Kishida's government is stepping up support for households to try to ease the effects of cost-push inflation, with a 29 trillion yen ($196.09 billion) spending packaged added to the budget.

Finally:  A series of TV ads from the Indeed job-posting site feature the memorable tag line “Indeed you do!”  When applied to jobs in the Tech sector, that line might be “Indeed, you don’t!”  Published data by Indeed’s “Hiring Lab” shows just how much job openings in the tech sector have shrunk this year.  (Chart from Indeed’s “Hiring Lab”) 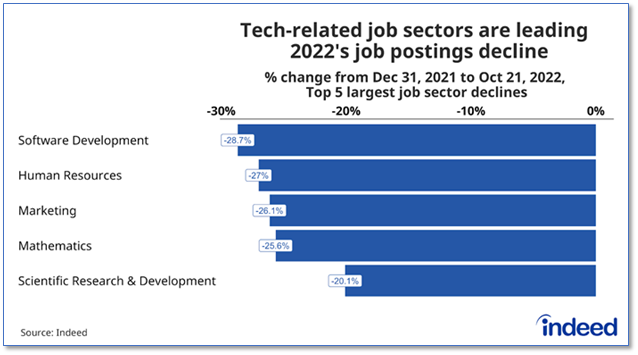