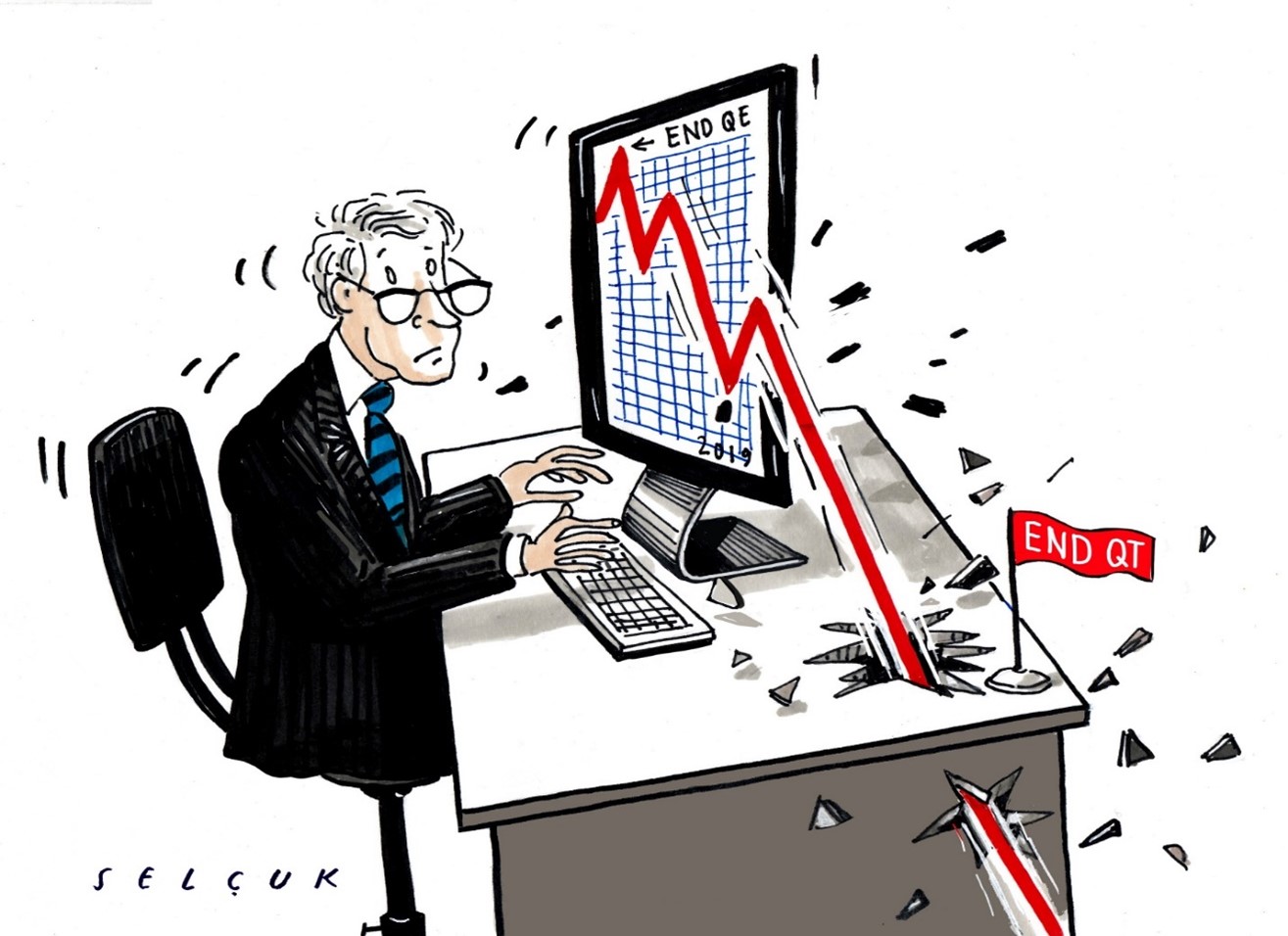 The S&P 500 was down over 20%, including dividends, from January through June with only one sector finishing positive. In June alone, the S&P was off more than 8% for its second-worst June since 1950. The NASDAQ and small-cap stocks were down even more. 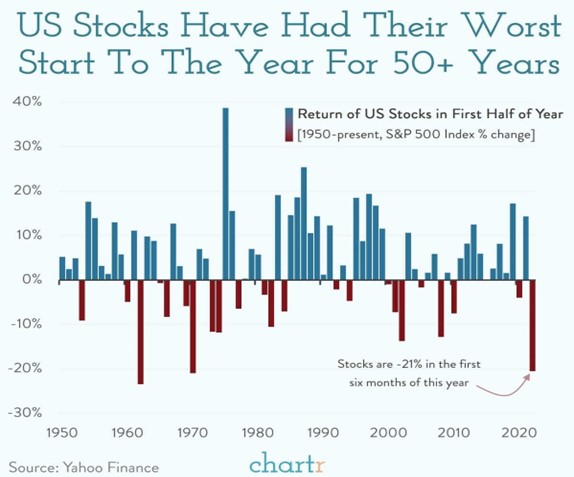 According to Chartr investor services:

Trying to predict what stock markets do next is a humbling endeavor, but the historical data is reasonably optimistic. Of the 23 times that stocks have fallen in the first half of the year they’ve gone on to rise in the second half of the year on 12 occasions.”

If a recession comes, stocks will likely be materially lower as stocks have not fully accounted for the coincident reversion in earnings. If a recession is averted, then markets are likely closer to being fairly valued and a major bear market more likely averted.

As the chart above illustrates, everything from tech to retail to industrials was slammed during the first half of 2022.

The only stocks that seemed to hold up well in the first half of the year were mostly in the utilities and energy sectors, though a few big-cap health care names ended in the black. While energy was up the first 6 months, it too has been subject to selling pressures recently. The sector has dropped over 25% in just the last few weeks from its high in early June. The biggest losers in the first 6 months were the growth sectors of the market. We began exiting the growth sectors (technology, consumer discretionary, communications) and reducing market exposure at the beginning of the year as conditions began to change.

The chart above from StockCharts.com illustrates how the stock market performance (orange) precedes the economic cycles (blue) by several months.

To complicate matters further, a recession is not determined until a substantial amount of data is sifted and a recession is declared months after the fact. Often the return of real estate and financials to positive returns may signal the end of the bear market and the beginning of the bull. 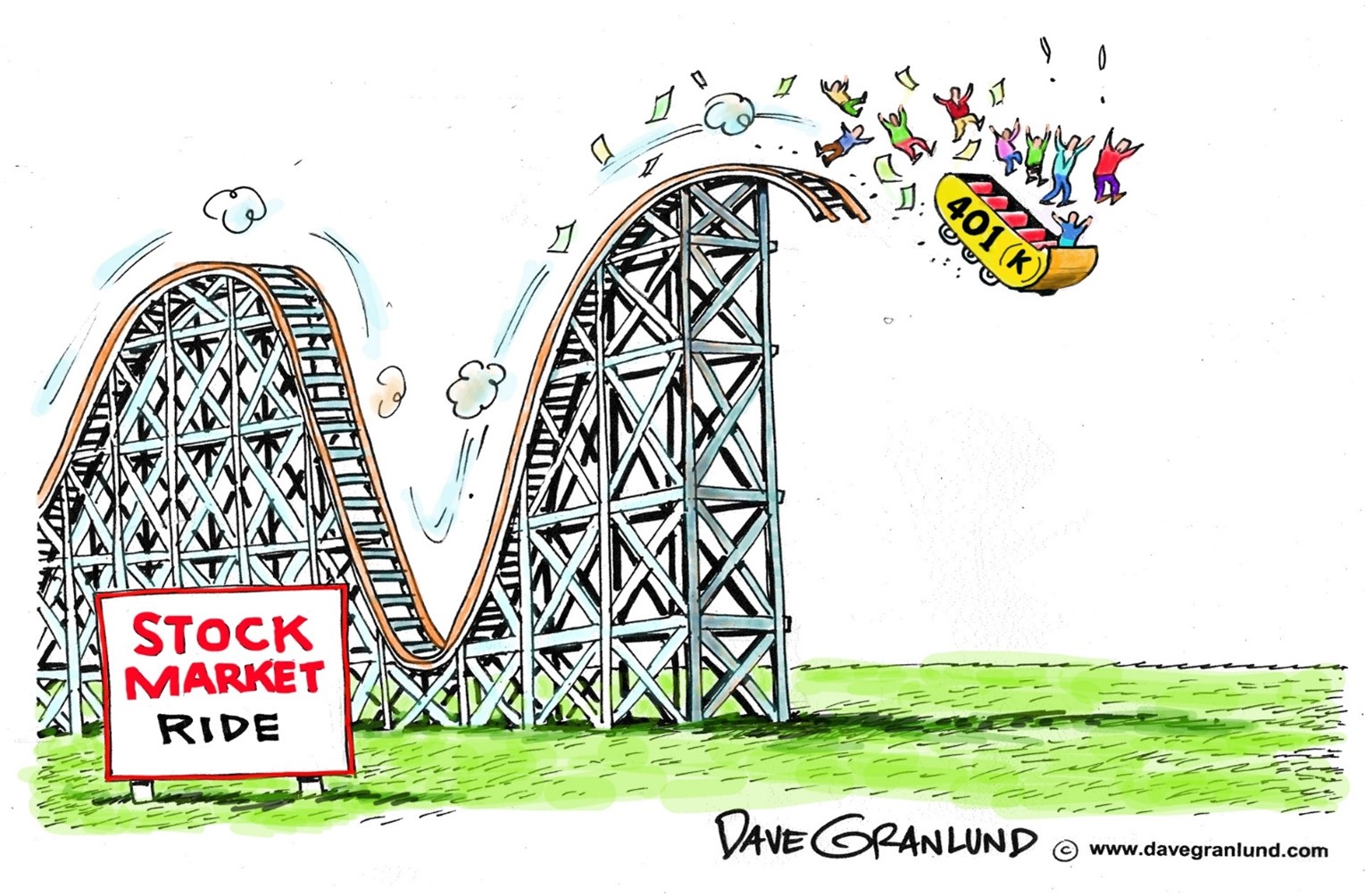 As we often discuss in our client meetings, recessions are almost always preceded by bear market downturns which occur well ahead of the recession. Passive advisors who wait for the recession will miss the window of opportunity to get out ahead of the bear market and their clients doomed to ride the market roller coaster to the depths of the crash.

Many investors are likely unprepared for the extended period required to recoup losses. Following the Dot.com crash in 2000, S&P investors did not recoup their lost capital until 2013. The Wall Street Journal called the first decade “the lost decade.”

Beyond mid-July, fasten your seat belt! Using Equity Clock's charts, (below) we find that the Dow Jones Industrial Average often has a rough go after the second week in July and may undergo a particularly unsettled stretch through the end of the third quarter.

Then it’s possible the usual year-end ascent may take hold.

The really good news for the bulls is that pre-election years are often fantastic periods. Interestingly, large-cap U.S. stocks normally rally ahead of the mid-term election.  In fact, there has never been a negative return on the S&P 500 from a mid-term election over the ensuing 52 weeks, according to Capital Group. 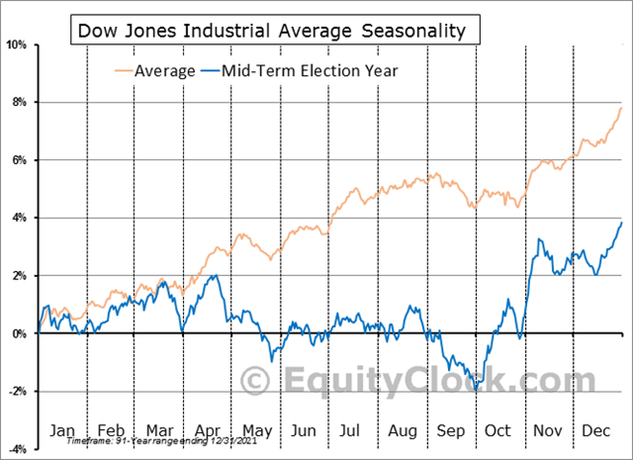 The chart (above from Equity Clock.com illustrates the typical performance of the Dow Jones Industrial average (orange) during mid-term election year periods (blue).

Seasonal trends are often favorable for the bulls going into the first two weeks of July. Earnings season and a Fed meeting will soon be the main topic and once Q2 reporting season passes, a bearish part of the calendar will often take hold later in the month. That could lead to the final rough stretch to endure before the most bullish part of the election cycle begins in the final quarter.

While we are hoping for a summer reprieve, this bear market is likely not over yet. The risk of a recessionary event increases the probability of a more serious market decline. If there is no recession, we are likely closer to a bottom than not. However, a recession could push stock prices lower another 20% or more.

Experience tells us that recessions are not predictable. There is a good reason for this observation: Recessions are not officially declared until after they are over. One common characteristic of late-stage bull markets and on-coming recessions is they are almost universally ignored by Wall Street and the financial entertainment media until we’re in one.

We have studied market cycles for many years. There is one thing we do know: long range markets are cyclical. Economic activity is also cyclical in nature. In fact, a declining stock market is one of the leading indicators of deteriorating economic conditions leading to recession.

For the record: We did a pretty good job of recognizing the last recession which was declared by economists (a year after the fact) to have begun in December of 2007. Here’s an excerpt from our January 28, 2008 newsletter when our company was called Peoples Wealth Management:

“One look at this 2-year S&P Chart gives a clear indication of what a recession looks like. It is very probable that the cyclical bull market that began in early 2002 topped out in October of 2007 and we are into a recessionary market slide….”

Recessions are a necessary, natural, and expected cyclical occurrence. Expansion and contraction are all part of long-term economic processes. Recessions have a cleansing effect on inflation, debt, leverage, and excessive exuberance – at both the consumer and investor level. They are the antidote to market bubbles.

We believe that the best way government can deal with recessions is to stay out of them. Government tinkering, no matter how well-meaning (or self-serving) has only made them worse in the long term.

The Bush Administration “fixed” the 2001-2002 recession by making home loans accessible to everyone who could fog a mirror and by allowing homeowners to loot their home equity to stimulate consumer spending. Sure enough, this stimulated spending and brought the country out of recession. In the long run however, the government’s policies precipitated a real estate crisis which found hundreds of thousands of people “upside down” in the value of their homes; and nearly led to a collapse of the entire financial structure.

The Obama Administration “solved” that credit crisis by creating large amounts of public capital to bail out some of the nearly bankrupt institutions that helped create the problem in the first place by polluting their mortgage-backed securities with substandard loans. The government bailed out these institutions, as well as the insurers who foolishly insured their security transactions, because they were “too big to fail.”

Recently, we have seen the actions of the Fed postpone a stock market bear. But we have also seen that the Fed can’t stop the inevitable economic recession, nor its effects on the markets. As Chairman Powell weighs the economic and technical evidence, he knows the longer-term risks are now real and evident. Going over a decade without allowing a recession presents an increased likelihood that the next one may be severe.

We avidly follow and respond to the changes in market trends when they occur. We ignore predictions from “talking heads” on television, and we don’t manage our portfolios based on headlines from the financial entertainment media. 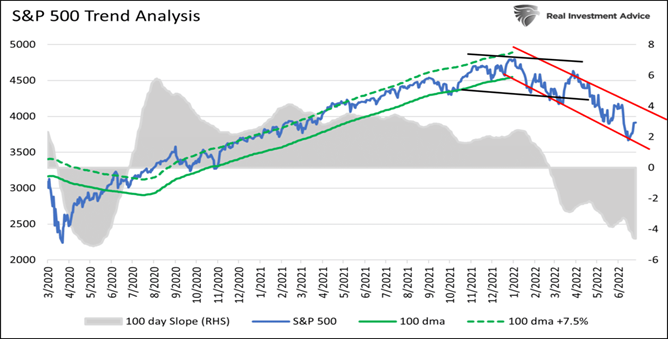 The current equity trend is sloping steeply downward. It will likely stay in the channel until the market thinks the Fed is letting up.

While the trendlines continue to slope downward, we will continue to use any rallies to raise cash, reduce risk, and rebalance allocations accordingly. We will continue focusing on keeping market losses relatively small until the slope of the red channel flattens out and the bottoming process can begin.

We trust our market indicators to help us determine market direction and guide us in our measured response to changing market conditions.

All in all, we recognize that recession risks are rising on a worldwide scale.  It pays to remember that stock market downturns have always been out in front of a recession. A cautious approach seems advisable.

Jim Reardon is a financial planner and advisor, and the Chief Investment Officer for ProActive Capital Management, Inc. He has over 20 years of experience pro-actively managing assets for clients and non-profit organizations. A Certified Financial Planner™, Jim is a graduate of Kansas State University and Washburn University School of Law. He holds licenses in law and securities and was admitted to the Kansas Bar in 1973.

All investments involve risk, including loss of principal invested. Past performance does not guarantee future performance. This commentary is prepared only for clients whose accounts are managed by our tactical management team at PCM. No strategy can guarantee a profit.   All investment strategies involve risk, including the risk of principal loss.