In the markets:   U.S. Markets: The major U.S. equity indexes ended the week lower with particularly steep losses on Friday.  The Russell 1000 Growth Index stocks gave up more ground than their Value counterparts, while the large cap S&P 500 Index posted steeper losses than its smaller-cap brethren.  The Dow Jones Industrial Average shed 640 points this week, closing at 33,811—a decline of -1.9%.  The technology-heavy NASDAQ Composite declined for a third consecutive week falling ‑3.8%.  By market cap, the S&P 500 ended down -2.8%, while the midcap S&P 400 gave up -1.7% and the small cap Russell 2000 ended the week down -3.2%.

Commodities:  Major commodities also ended the week down.   Energy was hit particularly hard following weeks of gains.  West Texas Intermediate crude oil declined -4.6% to $102.07 per barrel.  Brent crude shed -4.8% to $105.72.  Precious metals were also under pressure.  Gold gave up -2.1% to $1934.40 per ounce, while Silver retreated -5.6% to $24.26.   The industrial metal copper, viewed by some analysts as a barometer of world economic health due to its wide variety of uses, ended the week down -3%.

U.S. Economic News:  The number of Americans filing first-time unemployment claims dipped last week, remaining near a 54-year low.  The Labor Department reported that initial jobless claims fell by 2,000 to 184,000 reflecting the tight labor market in which work is easy to find and layoffs are at record lows.  Economists had expected claims to total 182,000.  New jobless claims have totaled fewer than 200,000 in 10 of the past 11 weeks and recently touched the lowest level since 1968.  Meanwhile, continuing claims, which count the number of people already receiving unemployment benefits, declined by 58,000 to 1.42 million.  That reading is the lowest since 1970.  Thomas Simons, money market economist at Jefferies LLC stated, “Demand for labor is strong and there are no reasons to believe that this will change any time soon.”

Sales of existing homes fell for a second consecutive month as mortgage rates continue to rise.  The National Association of Realtors (NAR) reported existing home sales decreased 2.7% in March, dropping to a seasonally-adjusted annual rate of 5.77 million.  With rates rising, and prices significantly higher, the average borrower is paying about 38% more on the monthly payment now than they would have for the same home one year ago, according to Realtor.com.  Compared to the same time last year, sales were down 4.5%.  The median price of an existing home sold in March was $375,300—an increase of 15% from March 2021.  That was the highest median existing home price ever recorded by the NAR.   At the end of March there were 950,000 homes for sale—a decrease of 9.5% year over year.  At the current sales rate that represents just a two-month supply of homes for sale.   Analysts generally consider a six-month supply of homes a ‘balanced’ housing market.

The confidence of the nation’s home builders fell again, primarily due to a drop in the underlying index that measures prospective buyer traffic.  The National Association of Home Builders (NAHB) reported its monthly confidence index fell two points from the previous month to 77 in April.  The index remains at its lowest level since September.  Still, readings above 50 indicate that more home builders believe that conditions are good rather than poor.  The last time the index dropped below 50 was back in April of 2020—at the start of the COVID-19 pandemic.  A separate survey from BTIG and HomeSphere found that 42% of home builders believe that interest rates are negatively affecting their business, up from less than 22% in January.  Nevertheless, the survey still found that sales were up in March for small- and mid-sized home builders, and most had raised prices.  Robert Dietz, chief economist for the NAHB, said in the report, “The housing market faces an inflection point as an unexpectedly quick rise in interest rates, rising home prices and escalating material costs have significantly decreased housing affordability conditions, particularly in the crucial entry-level market.”

A pair of “flash” or preliminary surveys by S&P showed high inflation is sapping the U.S. economy as consumers are balking at higher prices.  S&P’s flash U.S. services index fell this month to a three-month low of 54.7, erasing a sizeable gain from the prior month.  Meanwhile, its flash index for the manufacturing sector edged up to a seven-month high of 59.7.  Prices rose at the fastest pace on record.   As a result, S&P found, it “dampened customer demand.”  With numbers over 50 signaling growth, the headline numbers appear positive.  However, the details of the survey showed widespread worries over inflation and ongoing shortages of supplies and labor.  Executives are worried about the future, especially with the Federal Reserve now hiking interest rates.

Business activity in the Philadelphia region softened this month, falling from its highest level since November 2021.  The Philadelphia Fed reported its gauge of regional business activity fell to 17.6 this month, down 9.8 points from March.  The report missed economists’ expectations for a reading of 21.9.  The headline index is simply a single stand‑alone question about business conditions.  The underlying data of the index was also softer.  The barometer on new orders fell to 17.8 in April from 25.8 in the prior month.  The shipments index dropped to 19.1 from 30.2.  The measure on six-month business outlook dropped sharply to 8.2 in April from 22.7 in the prior month.  Price increases were also widespread.  The prices-paid index rose to its highest reading since June 1979.

The U.S. economy continued to expand at a “moderate” pace through the beginning of April, but high inflation showed little sign of letting up in “the coming months”, according to a Federal Reserve survey.  The survey, known as the ‘Beige Book’, is a collection of anecdotal reports from each of Federal Reserve’s regional banks, found little evidence inflation is set to turn sharply lower.  Businesses reported being forced to pay higher wages due to a tight labor market, continued supply-chain bottlenecks, and rising prices for just about everything.  “Firms in most Districts expected inflationary pressures to continue over the coming months,” the Beige Book said.  Notably, there was hardly any talk of the threat of a recession.  Only one business person surveyed mentioned the possibility.

International Economic News:  The Bank of Canada (BoC) is embarking on its first interest rate hiking cycle above “neutral” in 14 years.  In an attempt to slow a three-decade high in inflation, the central bank said it will hike its benchmark interest rate toward the neutral rate—estimated to be between 2-3%.  Furthermore, the bank added it may need to lift rates above that range.  At neutral, interest rates are said to be neither stimulating nor restraining economic activity, so a move above neutral could increase the risk of a hard landing, or sharp downturn for the economy.  The BoC has not hiked above neutral since 2008.  Greg Anderson, global head of foreign exchange strategy at BMO Capital Markets stated, "There are a lot of forces out there that are contributing to inflation and some of them may not be that temporary."  An aging workforce, the transition to a greener economy and moves to reduce economic interdependence between countries are among the long-term drivers of inflation.  Temporary pressures include supply shocks in global trade and the war in Ukraine.   Canada's inflation rate was 5.7% in February.

Gross Domestic Product growth in the United Kingdom is expected to slow to the worst level in the G7 next year, according to the International Monetary Fund.  The IMF downgraded its growth forecasts around the world, with 2022 GDP growth now expected at 3.6%, down from January’s prediction of 4.4%.  The United Kingdom is expected to slump to the bottom of the table of comparable economies in the G7, the IMF said.  It will also face the highest inflation.  UK energy companies are already calling for the government to step in with a major intervention to help consumers pay for higher prices, amid concerns that “fuel poverty” could increase rapidly.

On Europe’s mainland, French President Emmanuel Macron and his right-wing challenger Marine Le Pen went head-to-head in a televised debate seeking to sway undecided voters, just days before the presidential election on Sunday.   Macron holds a solid lead in the polls, but his political advisors warned against complacency ahead of the debate.   Macron focused on a 9 million euro loan Le Pen’s party took from a Czech-Russian bank in 2014, arguing that “You are dependent on the Russian government, and you are dependent on Mr. Putin.   When you speak to Russia you are speaking to your banker.”  Le Pen stated her party had only taken the loan because French banks refused to lend to her.  “I'm an absolutely and totally free woman,” she said.  Le Pen vowed to put an end to “anarchic and massive” immigration into France, claiming it was worsening crime.

German Finance Minister Christian Linder is asking for “patience” as the country is moving “as fast as possible” to steer itself away from Russian energy.  "We are willing to stop all energy imports from Russia, it's just a matter of time," Lindner stated.  Germany is facing mounting pressure to cut Russian energy from its economy amid criticism that the proceeds are funding the war in Ukraine.  But Europe's largest economy is heavily reliant on the imported commodities: Germany buys about 25% of its oil and 40% of its natural gas from Russia.  Lindner added that “it’s preferable to have sanctions, which we can stand for months, for years.”  Lindner’s comments came as German Foreign Minister Annalena Baerbock stated the country will stop importing Russian oil by the end of the year.  "We will halve oil by the summer and will be at zero by the end of the year, and then gas will follow,” she added.

In Asia, economists at Bank of America have slashed their forecast for China’s 2022 GDP growth from 4.8% to 4.2%.  Officially, Beijing has set a GDP growth target of around 5.5% for 2022.  Winnie Wu, China equity strategist at Bank of America Securities stated, “We’re concerned that 2022 could be even more challenging than 2020.”  Wu noted that China’s current lockdowns are spread widely across the mainland, unlike in 2020 when restrictions were concentrated in one province.   Furthermore, online spending by China’s consumers has slowed and the new round of lockdowns has undermined business confidence.  Finally, China’s exports could take a hit as countries like India and Vietnam have benefited from U.S.-China trade tensions.

Japan’s government upgraded its key economic assessment for the first time in four months.  In its monthly report Japan’s Cabinet Office wrote, “The Japanese economy shows movements of picking up” in place of the previously used phrase “some weaknesses are seen”.  The recovery has been driven by more spending for traveling and dining out, a government official said.    But the Cabinet Office cautioned that short-term downside risks stemming from rising raw material prices, fluctuations in financial markets and supply-side constraints amid the war in Ukraine remain.  The assessment on public investment was upgraded as well as "solid"—that was its first upward revision since July of 2020.  All other evaluations were kept unchanged.

Finally:  For the second time this year Netflix shares went into absolute freefall.  NFLX is the worst performing stock in the S&P 500 this year, and is down about 65% from its all-time high.  Netflix shares lost more than a third of their value just this week after reporting not just a slowdown in growth, but an actual drop in subscriber numbers for the first time ever.  The streaming giant lost over 200,000 subscribers in its latest quarter—and it’s expecting even more in coming quarters.  In its shareholder letter Netflix expects to lose another 2 million as competition intensifies in streaming and the biggest markets reach full saturation.  The company added that it was losing revenue due to its service being shared in around 100 million households.  To raise revenue, analysts expect a crackdown on account sharing is coming, as well as offering an ad-supported option.  (Chart by chartr.co) 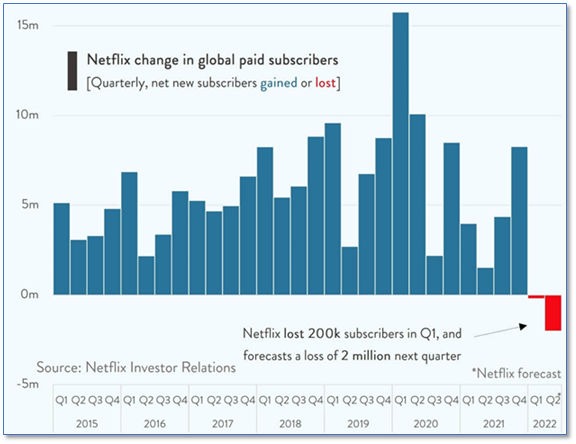