In the markets:   U.S. Markets:  U.S. stocks pulled back for a second week as fears intensified over rising interest rates.  Nearly every sector within the index reported sharp losses with the exception of energy shares.  The Dow Jones Industrial Average retreated -556 points finishing the week at 32,920, a decline of -1.7%.  The technology-heavy NASDAQ Composite fell a further -2.7% after last week’s -4% drop.   By market cap, the large cap S&P 500 and S&P 400 mid cap index each pulled back -2.1% and the small cap Russell 2000 finished the week down -1.9%.

International Markets:  International markets were also a sea of red.  Canada’s TSX pulled back -2.5%, while the United Kingdom’s FTSE ended down -1.9%.   On Europe’s mainland, France’s CAC 40 and Germany’s DAX retreated ‑3.4% and -3.3% respectively.  In Asia, China’s Shanghai Composite ended the week down -1.2% after six weeks of gains.  Japan’s Nikkei ended the week down -1.3%.  As grouped by Morgan Stanley Capital International, developed markets finished down -1.8% and emerging markets retreated -1.6%.

U.S. Economic News:  The number of Americans filing first-time unemployment claims in early December fell to a nearly three-month low, indicating layoffs around the holiday season remain low even as the economy softens.   The Labor Department reported initial jobless claims fell by 20,000 to 211,000 last week.  Economists had forecast an increase of 1,000.  The number of people applying for jobless benefits is one of the best barometers of whether the economy is getting better or worse. New unemployment filings have gradually risen from a 54-year low of 166,000 last spring, but they are still extremely low.  Forty-one of the 53 states and U.S. territories that report jobless claims showed a decline last week.  New York, Georgia, Texas and California posted the biggest drops.  No states reported a large increase.

Consumers are expecting smaller increases in inflation in both the short term and over the longer run, the New York Federal Reserve said.  The regional Fed bank said in its November Survey of Consumer Expectations that one year from now, respondents see inflation running at a 5.2% rate, down from 5.9% in the last survey.  That’s the largest month-to-month decline on record, the bank said.  Three years from now, consumers see inflation running at a 3% rate, down slightly from 3.1% in October.  The Fed watches the public’s views on the inflation outlook carefully.  Economists at the Brookings Institution wrote in a recent report, “They matter because actual inflation depends, in part, on what we expect it to be.”

Confidence among U.S. small-business owners rose modestly in November, led by easing inflation and improving short-term expectations.  The National Federation of Independent Business (NFIB) reported its small-business optimism index rose to 91.9 in November from 91.3 the previous month, beating the 90.8 consensus forecast.  Despite the increase, sentiment among small-business owners remained subdued in November as the index posted its 11th consecutive month below the historical average of 98.  "Going into the holiday season, small-business owners are seeing a slight ease in inflation pressures, but prices remain high," NFIB Chief Economist Bill Dunkelberg said.  "The small business economy is recovering as owners manage an ongoing labor shortage, supply-chain disruptions, and historic inflation," he said.  Inflation remains the top business problem for small-business owners, with 32% of owners reporting it as their single most important problem in operating their business.

Inflation at the consumer level rose a slight 0.1% in November, suggesting the worst U.S. inflation in 40 years is receding.  The reading was lower than economists’ expectations of a 0.3% increase.  The annual rate of inflation, meanwhile, fell to 7.1 % from 7.7% in the prior month, marking the lowest level since the end of 2021.  Inflation peaked at 9.1% in June.  The so-called core rate of inflation, which omits food and energy, rose 0.2%.  That’s the smallest gain since August 2021 and down -0.1% from forecasts.  The advance in the core rate over the past year dropped to 6.0% from 6.3%.  The Fed views the core rate as a more accurate predictor of future inflation trends.

Sales at U.S. retailers fell -0.6% in November, marking their biggest decline in almost a year.  The decline was largely because of weak car sales where higher interest rates likely played a role.  Economists had only expected a -0.3% decline.  Excluding vehicle sales, receipts dropped a lesser -0.2%.  Yet most of the increase in spending--perhaps even all of it--simply reflects higher prices.  Retail sales have risen 6.5% in the last 12 months, while the cost of living has increased 7.1% (retail sales figures do not factor in inflation).   Sal Guatieri, senior economist at BMO Capital Markets noted that while the holiday shopping season got off to an earlier start this year, “the lack of follow-through into November suggests consumers are being much more cautious with their money amid recession fears,” he wrote.

In a move that was widely expected, the Federal Reserve hiked interest rates by half a percentage point and signaled more tightening into next year as it continues to battle historically high inflation.  The half-point increase brings the federal-funds rate up to 4.25%-4.5%--its highest level since 2007.  In new projections, Fed officials projected rates to top out at 5.25%, higher than their September forecast of 4.75%.  “We’re going into next year with higher inflation than we thought,” said Fed Chair Jerome Powell, who repeated that the Fed will do what it takes to extinguish price pressures.  Seven Fed officials expect rates to go even higher, with two seeing rates topping out at 5.75%.  One hawkish official expects rates to remain at that level through 2025.   “They are signaling their determination to get inflation under control even at the cost of imposing a mild recession on the economy,” said Bill Adams, chief economist at Comerica Bank.  For the first time, several senior Fed officials predicted a recession in 2023.

Business conditions deteriorated in December, according to a pair of surveys from S&P Global.  S&P Global’s preliminary, or “flash”, reading of its U.S. Services sector index slipped to a four-month low of 44.4 from 46.2 in November.  The index now sits near its lowest level of the pandemic era.   Meanwhile, its preliminary Manufacturing sector index fell to a nearly three-year low of 46.2 from 47.7.  New orders, a sign of future sales, fell sharply last month, S&P Global found.   Manufacturing orders were the weakest since the 2007-2009 Great Recession.  Employment levels remained basically unchanged, indicating that most companies are avoiding layoffs for now.  Business leaders are reluctant to fire workers given how hard it’s been to hire qualified people in the first place.  One bright note in the report, the cost of supplies, a measure of inflation, rose at a slower rate in another sign that price pressures are easing.  Chris Williamson, chief business economist at S&P Global stated, “Fed rate hikes are having the desired effect on inflation, but the economic cost is building, and recession risks are consequently mounting.”

International Economic News:  Young Canadians are increasingly pessimistic about Canada's economic situation compared to a year ago and are more willing to stay in their current jobs than leave, a recent survey from Leger shows.  The results are part of Leger's latest Youth Study Report, released this week, which asked 3,007 Canadians between the ages of 15 and 39 questions about finances, the future and employment.  "Whether realistic or cynical, they are nervous about the future and prefer to live in the moment," the report says. "They do not trust traditional institutions to make things better; rather, they prefer to embody change locally."  The survey found 74% of Generation Z and millennial Canadians do not believe the country's economic situation will improve in the following year, compared to 66% of those polled in 2021.

Across the Atlantic, the Bank of England has warned the United Kingdom is facing its longest recession since records began, as it raised interest rates by the most in 33 years.  Furthermore, it warned the UK would face a "very challenging" two-year slump with unemployment nearly doubling by 2025.  Bank of England Governor Andrew Bailey warned of a "tough road ahead" for UK households, but said it had to act forcefully now or things "will be worse later on".  The BoE hiked interest rates 75 basis points, to 3%, its biggest jump since 1989.  By raising rates, the Bank is trying to bring down soaring prices as the cost of living rises at its fastest rate in 40 years.

On Europe’s mainland, French business activity contracted at a faster rate in December than the previous month adding to signs of a recession ahead for the Eurozone's second-biggest economy as inflation hits businesses.   S&P Global's flash December purchasing managers index (PMI) for France's services sector came in at 48.1 points, down 1.2 from November and below the consensus estimate of 49.1.  The country's manufacturing sector fared slightly better, according to the flash forecasts, but remained in contraction.   The flash December composite PMI, which comprises both the services and manufacturing sectors, fell 0.7 point to a 22-month low of 48.0.  S&P Global market Intelligence senior economist Joe Hayes noted, “Another month of falling business activity across the euro area's second-largest economy heightens the risk that the region is headed for a recession.”

Inflation in Germany, the euro zone's biggest economy, is likely to be higher than earlier thought while economic growth will be weaker with a recession next year now certain, the Bundesbank said this week in its biannual update of its economic forecasts.  The new forecasts mirror similar revisions by the European Central Bank, which now sees inflation in the 19-country euro zone above its 2% target through 2025 and a shallow recession over the winter months.   For Germany, inflation is now seen at 7.2% in 2023, well above June projection for 4.5%, while the 2024 figure was raised to 4.1% from 2.6%.   "The risks to economic growth are tilted predominantly to the downside, mainly due to potential shortages in the supply of energy," the Bundesbank said. "With regard to inflation, upside risks predominate."  The growth forecasts also confirm that Germany is likely to be one of the weakest performers in the Euro currency bloc next year.

In Asia, China relaxed its “zero-COVID” restrictions because it had to strike an economic and social balance, a former top epidemiologist stated.  Last week, China announced a 10-point plan that included dropping mass testing, health codes and centralized quarantine requirements for most cases.  The dramatic shift away from zero Covid followed public protests in multiple cities in November, a rare show of widespread grievance against the restrictions.  At the country’s most important annual meeting, the Central Economic Work Conference, the conclusion noted the government struck a balance between pandemic control and economic development.

Japan's manufacturing activity shrank at the fastest pace in more than two years in December on soft demand and persistent cost pressures, a corporate survey showed.  The au Jibun Bank Flash Japan Manufacturing Purchasing Managers' Index (PMI) was down to a seasonally adjusted 48.8 in December from a final reading of 49.0 in the previous month.  The index was below the 50-mark that separates contraction from expansion for a second month and marked the sharpest decline since October 2020's 48.7.  "Manufacturing firms continued to struggle in the face of subdued demand conditions and severe inflationary pressures," said economist Laura Denman at S&P Global.  However, Japan’s service sector grew on a tourism reopening rising to its highest level since September of 2019.  With subdued manufacturers and robust services, the au Jibun Bank Flash Japan composite PMI stood on the break-even line of 50.0, up from a final 48.9 last month.

Finally:  It is clear that the Federal Reserve is intent on bringing inflation under control with its series of rate hikes.  However, what most people probably don’t realize is the rapidity with which the Federal Reserve has acted already.  The Federal Reserve has hiked interest rates higher and faster than at any in the modern era.  In the current cycle, the Fed has hiked over 3.5% in under ten months.  By contrast, in the hiking cycle from 2004 to 2006, the same move took almost two years. (Chart from chartr.co) 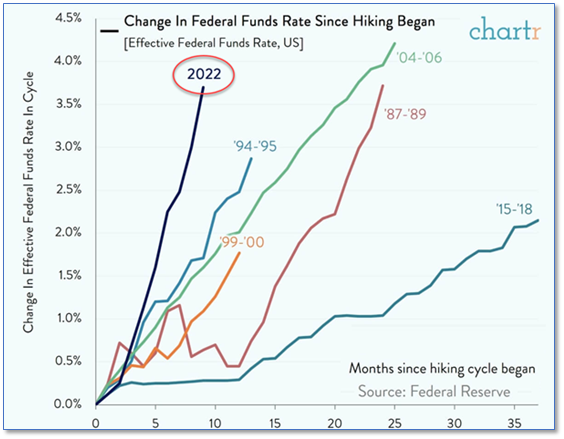