In the markets:   U.S. Markets:  U.S. stocks gave back much of their previous two weeks’ gains, as some surprisingly strong economic data dampened hopes that the Federal Reserve might be able to slow or cease its program of raising interest rates to cool inflation.  The S&P 500 Index recorded its worst return in five weeks, while the small-cap Russell 2000 Index endured its worst week since late September.   The Dow Jones Industrial Average shed almost one thousand points (-953) finishing the week at 33,476—a decline of -2.8%.  The technology-heavy NASDAQ Composite declined -4%, while the large cap S&P 500 pulled back -3.4%.  The mid cap S&P 400 index gave up -4.1%, while the small cap Russell 2000 fared the worst of the major indexes ending the week down -5.1%.

Commodities:  Energy markets continued to get pummeled.  West Texas Intermediate crude oil plunged -11.2% to $71.02 per barrel, along with Brent crude which finished down -10.2%.  Precious metals maintained their luster.  Gold finished the week up $1.10 to $1810.70 per ounce.  Silver rose 2% to $23.72.  The industrial metal copper, viewed by some analysts as a barometer of world economic health due to its wide variety of uses, ended the week up 0.7%.

U.S. Economic News:  The number of Americans filing for first-time unemployment benefits climbed last week, a sign the red-hot labor market may be slowly cooling off.  The Labor Department reported initial jobless claims rose to 230,000, up 4,000 from the prior week and matching estimates.  The number of people applying for jobless benefits is one of the best barometers of whether the economy is getting better or worse.  New unemployment filings have gradually risen from a 54-year low of 166,000 last spring.  Meanwhile, the number of people already collecting benefits, known as “continuing claims”, rose by 62,000 to 1.67 million.   That’s the highest reading since February.  Chief economist Joshua Shapiro of MFR Inc. stated, “While the level of initial claims remains very low on a historical basis, signaling that the labor market remains reasonably vibrant, an uptrend does appear to be starting.”

The U.S. economy continued to grow last month according to a survey from the Institute for Supply Management (ISM).  ISM reported its service-sector index, which makes up the vast majority of U.S. economic activity, climbed 2.1 points to 56.5 in November—a strong sign that the economy continues to expand steadily.  Readings over 50 signify the economy is still growing and above 55 are viewed as exceptional.  The reading exceeded the consensus forecast for a 0.7-point decline to 53.7.  In the details, the production gauge jumped 9 points to 64.7, while new-orders pulled back half a point to a still-strong 56%.   Some positive news on the inflation front, the prices-paid index fell 0.7 points to 70%.  Prices are rising much more slowly than they were in the spring.   Still, the report wasn’t strong enough for many analysts to change their views of an impending recession.  Oren Klachkin, lead U.S. economist at Oxford Economics wrote in a note to clients, “Activity remains fairly resilient for now, but we believe that it’s only a matter of time before Fed interest-rate hikes and tighter financial conditions push the economy into a recession.”

Consumers continued to borrow at a solid pace in October, the Federal Reserve reported.  Total consumer credit rose $27.1 billion, up from $25.8 billion the prior month.  From the same time last year, borrowing is up 6.9%, up 0.3% from the prior month.  Economists had been expecting a $26 billion gain, according to a Wall Street Journal forecast.  Revolving credit, mainly credit cards, rose 10.4% in October after an 8.2% gain in the prior month.  Non-revolving credit, typically auto and student loans, rose 5.8% down from a 6.1% growth rate in the prior month.  Of note, according to separate data from the New York Federal Reserve Bank, credit card balances are up 15% over the past year—the largest increase in more than 20 years.

Prices at the producer-level picked up last month but slowed slightly on an annual basis.  The Labor Department reported wholesale prices rose 0.3% in November, slightly above forecasts for a 0.2% rise and its third consecutive increase.  The core producer price index, which excludes volatile food, energy, and trade prices, also rose 0.3% in November, up from a 0.2% gain in the prior month.  The increase in producer prices over the past 12 months slowed to 7.4% gain from 8.1% in the prior month.  That is the slowest annual advance since May 2021.   Although hotter than expected in November, inflation at the wholesale level is showing steady deceleration from its peak in March.  Matthew Martin, economist at Oxford Economics wrote, “PPI inflation continued to trend downwards, but economic momentum will keep it elevated until at least the second quarter of next year.”

International Economic News:  According to the IMF, the Bank of Canada will likely need to keep interest rates at or above 4% for most of 2023 to cool an overheated economy and tame high inflation.  The central bank's benchmark overnight interest rate currently stands at a nearly 15-year high of 4.25% after a 50-basis point hike announced this week.   The IMF, in its annual review of Canada's economy said, "the key immediate priority is to bring inflation down without triggering a recession," and that it welcomed the Bank of Canada's "decisive policy tightening."  The bank has raised rates at a record pace of 400 basis points in nine months to fight inflation that is far above its target.  Money markets expect the policy rate to peak at 4.36% in June and end 2023 at about 4.10%.

Across the Atlantic, the United Kingdom faces a “lost decade” of growth if action isn't taken to address slumping business investment and worker shortages, a leading business lobby group has warned.  In a bleak economic forecast published this week, the Confederation of British Industry (CBI) said that three quarters of companies continue to struggle to find qualified workers for unfilled positions.  The CBI urged changes in government policy, including a more flexible immigration system and tax breaks to boost investment.  “Britain is in stagflation,” CBI director general Tony Danker wrote in his statement.   “With rocketing inflation, negative growth, falling productivity and business investment,  Firms see potential growth opportunities but a lack of ‘reasons to believe’ in the face of headwinds are causing them to pause investing in 2023,” he concluded.

Across the Channel the mood was much more optimistic.  The head of France’s central bank, Francois Villeroy de Galhau forecasted the French economy will “probably” slightly expand next year.  "I can't rule out a recession, but this is not our base line scenario", Villeroy stated in an interview, adding he for now expected "probably slightly positive growth" next year.  The French central bank is due to publish a detailed growth outlook next week.  It had earlier this year given a range of -0.5% to +0.8% for 2023 growth, saying current economic uncertainties would not allow it to give a more precise forecast.  For this year, the central bank said the economy is on course to finish the fourth quarter with slightly positive growth, which “probably translates into a 2.6% growth rate for all of this year,” Villeroy added.

Europe’s economic powerhouse, Germany, is facing a serious downturn in its housing market analysts say.  With mortgage rates steadily increasing, home price have already declined around 5% since March, according to Deutsche Bank data.  Jochen Moebert, macroeconomic analyst at Deutsche Bank estimates home prices will drop between 20% and 25% in total from peak to trough.  Holger Schmieding, chief economist at Berenberg stated, "The housing market is softening significantly," he said, citing a strong decrease in demand for loans and a drop in housing construction.

In Asia, Chinese President Xi Jinping met with Saudi Arabia’s King Salman bin Abdul-Aziz Al Saud in Riyadh for the first time in nearly seven years.  While a number of deals were signed, at the heart of the visit was oil.  Saudi Arabia is the top supplier of oil to China, and China is its biggest oil customer, importing $43.9 billion in Saudi crude in 2021.  The two countries announced they will continue to "firmly support each other's core interests," sovereignty and territorial integrity, further pledging joint cooperation to ensure the "peaceful nature of Iran's nuclear program" and urging Tehran's cooperation with the International Atomic Energy Agency.  The visit is a sign that China and the Gulf region are deepening their economic relations at a time when US-Saudi ties have been strained over OPEC’s decision to slash crude oil supply in the midst of higher energy prices.

Japan's economy is set to enter into recession as export growth slows, according to Capital Economics' Marcel Thieliant.   The senior Japan economist at Capital Economics stated, “We think the Japanese economy will enter a recession sometime next year.”  The recession will "mostly be driven by a drop in exports and also by becoming more cautious, which is typically what you see when exports start to fall," he said.  Japan most recently reported a larger-than-expected trade deficit of $15 billion for the month of October.  On an annualized basis, exports were down almost 4% in October from the prior month.

Finally:  As inflation and shortages of key components pushed the average price of a new car to all-time highs (if you could even get one), it is logical that prices on used cars would follow suit – and they did.   However, the bloom is off that rose and wholesale prices of used vehicles reached their lowest level in more than a year last month as interest rate hikes raised borrowing costs and fears of an imminent recession continue to spread.   Cox Automotive reported that its Manheim Used Vehicle Value Index, which tracks prices of used vehicles sold at its U.S. wholesale auctions, has declined 15.6% from record levels in January through November. Retail prices have not fallen as sharply as wholesale prices, but are expected to follow suit.   (Chart from CNBC.com) 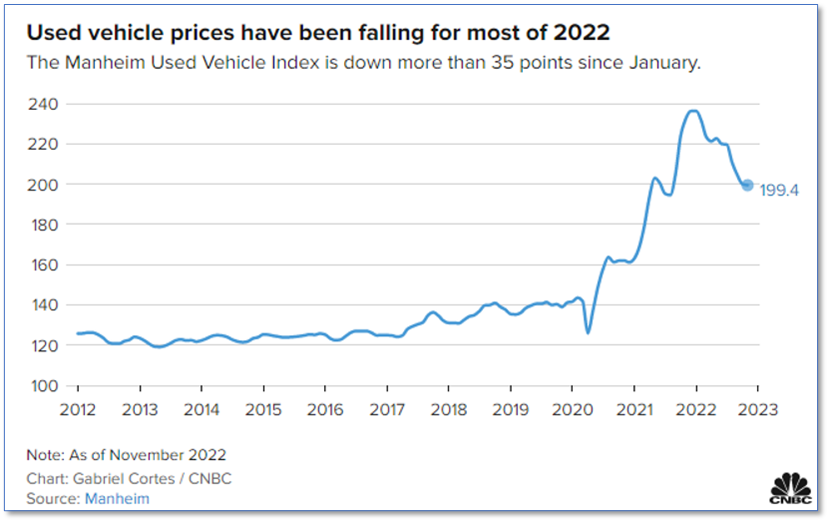