Commodities:  The majority of commodities continued to rise.  Oil jumped 6.2% to $83.82 per barrel of West Texas Intermediate crude oil.  Precious metals also finished the week up.  Gold rose 1.1% to $1816.50 per ounce, while Silver gained 2.3% to $22.92 an ounce.   The industrial metal copper, viewed by analysts as a barometer of world economic health due to its wide variety of uses, finished the week up 0.2%.

U.S. Economic News:  The number of Americans filing first-time unemployment benefits jumped to their highest level since mid-November last week.   The Labor Department reported initial jobless claims rose by 23,000 to 230,000 in the week ended January 8th.  Economists had expected new claims to fall to 200,000.  Despite the unexpected increase, economists still report the downward trend in initial claims remains intact.  Meanwhile, “continuing claims”, which counts the number of Americans already receiving unemployment benefits, plunged by nearly 200,000 to 1.56 million people.  That reading is its lowest level since June of 1973.

High inflation is the number one concern among small-business owners, according to a recent survey.  The National Federation of Independent Business (NFIB) reported nearly 22% of survey respondents said inflation was their top problem.  That was its highest reading in 41 years.  NFIB Chief Economist Bill Dunkelberg addressed the gravity of the situation writing in the release: “Inflation is at the highest level since the 1980s and is having an overwhelming impact on owners’ ability to manage their businesses.”  Still, despite struggling with higher prices, small businesses also reported being more optimistic about the future.  The NFIB’s small-business optimism index rose 0.5% to a three-month high of 98.9.  High inflation overtook skilled labor shortages, which had been the biggest concern among owners for most of the past year.  Nearly half of all owners said they could not fill open jobs despite a record number reported increasing pay.

Sales at the nation’s retailers pulled back in December as higher prices, shortages, and the Omicron-variant weighed on shoppers.  The Census Bureau reported retail sales sank 1.9% in December—its biggest drop in 10 months.   Economists had expected just a 0.1% decline.  If one takes the higher inflation into account, retail sales were even more depressed.   The biggest decline, -8.7%, took place among internet retailers such as Amazon.  It was that segment’s largest drop in a year.  Sales also fell 7% at department stores, and 5.5% at furniture store.  Ian Shepherdson, chief economist at Pantheon Macroeconomics, doesn’t expect the weakness to persist.  In a research note, Shepherdson wrote, “Lack of cash is not the issue, so we expect a strong rebound in sales once the Omicron wave subsides.  January is a probably a write-off but February and March will be much better.”

Consumer prices rose half a percent in December and pushed the annual inflation rate to a nearly 40-year high of 7%.  The gain in the CPI exceeded the consensus forecast of a 0.4% rise.  A separate measure of inflation that strips out the often-volatile food and energy categories, so-called “core CPI”, rose 0.6% last month.  That pushed the increase over the past 12 months to 5.5% from 4.9% - a 31-year high.  Inflation has soared due to strong consumer demand and ongoing labor and supply shortages.  The Federal Reserve has moved forward its plans to remove stimulus from the economy and is widely expected to begin raising short-term interest rates soon to combat the nation’s high inflation.  Fed Chairman Jerome Powell said this week, “The economy no longer needs or wants the very highly accommodative policies we’ve had in place to deal with the pandemic and the aftermath.”

Wholesale prices rose just 0.2% in December, marking their smallest increase in a little over a year.  The increase in producer prices was well below the 0.4% forecast by economists.  On an annualized basis, the yearly increase in prices at the wholesale level ticked down to 9.7% from 9.8%.  It was the first decline in the annual rate since early in the pandemic.  Still, the annualized increase remains among its highest readings in almost 40 years.  Meanwhile, core PPI, which strips out the most volatile goods and services, rose a faster 0.5% last month.  That reading has climbed 6.9% over the past year—unchanged from the prior month.  In a research note, senior economist Bill Adams of PNC Financial Services doesn’t expect inflation to cool anytime soon writing, “Inflation will slow in 2022 but continue to overshoot the Fed’s [2%] target.”

After years of having little-or-no pricing power, businesses were able to pass along price gains to customers in December, according to the latest “Beige Book” report from the Federal Reserve.  The “Beige Book” reported ‘solid growth’ in the prices businesses charged to customers.  For years, Fed officials have said that a company’s pricing power was limited due to globalization and technology, i.e. the fact that consumers could shop online for the best prices.  Now, however, the rise in prices for virtually everything has contributed to pricing pressures across a wide range of industries, including the service sector.  Economists say service-sector inflation is a particular red flag for central bankers because the U.S. economy is dominated by services and also because price gains in that sector seem to be more intractable and less reversible.  Several Fed districts reported that expectations for growth over the next several months “cooled somewhat” during the last few weeks.

International Economic News:  The head of Canada’s largest bank said the uncertainty wrought by the Omicron variant is making it difficult to generate economic forecasts, as the country struggles with rising hospitalizations, employee absences, and new lockdowns.  RBC Chief Executive Officer Dave McKay made the comments at RBC’s CEO Conference which brought together the CEO’s of Canada’s top banks as well as their federal regulator, the Office of the Superintendent of Financial Institutions (OSFI).  “Not getting a forecast is no signal that we’re concerned at all, we’re just having trouble forecasting,” he said. “I think it’s going to reduce growth, probably from 4.5 to 1.5% in Q1 in Canada, but then growth should start to return in Q2.   Therefore, we still see a four-plus GDP growth year in Canada.”

Across the Atlantic, the United Kingdom said it will cut the minimum self-isolation period for those with COVID-19 in England from seven days to five to help boost economic activity.  In a statement to members of parliament, Health Secretary Sajid Javid said the government had reviewed the policy to make sure it maximized “activity in the economy”, while minimizing “the risk of infectious people leaving isolation.”  “Any curbs on our freedoms must be an absolute last resort and that we shouldn't keep them in place for a day longer than absolutely necessary," Javid added.   The new rules, to take effect next week, will instead require those with coronavirus to test negative on a lateral flow device on days five and six in order to end their isolation.

On Europe’s mainland, France announced it will ease its coronavirus travel restrictions for travelers from Britain, enabling vaccinated tourists to visit if they have a negative test.  A blanket ban on non-essential travel announced last month caused major disruptions over the Christmas and New Year holidays, but was justified by the French government as needed to keep the spread of the Omicron variant to a minimum.   The opening of the border will allow thousands of winter-sports enthusiasts to head to the French Alps, which are popular with British skiers who had to cancel holidays booked over the Christmas and New Year period.  Britons account for roughly 15% of all visitors to French ski resorts, and even more in some of the biggest high-altitude resorts.

Germany’s BDI industry association said it expected Europe’s largest economy to grow 3.5% this year—a more cautious forecast than the government as it warned companies could face another “stop-and-go” year due to the pandemic.  "The order books are full, but production is not keeping pace with demand.  Pandemic restrictions and supply bottlenecks affect large parts of the economy," BDI President Siegfried Russwurm said.  Berlin predicted gross domestic product growth to accelerate to 4.1% this year from an estimated 2.6% in 2021.  The industry lobby group pointed to supply problems with microchips and other important components which have hit production in Germany's large automobile sector particularly hard.

In Asia, investment bank Goldman Sachs cut its 2022 forecast for China economic growth in expectation of increased restrictions on business activity to contain the latest Omicron variant.  Over the past week, China has reported pockets of omicron cases in Tianjin city and Anyang, which have prompted at least partial lockdowns.   Xi’an, a major city in central China, has been locked down since late December to control a Covid outbreak that authorities say is not linked to omicron.  Goldman Sachs analysts Hui Shan wrote, “In light of the latest Covid developments — in particular, the likely higher average level of restriction (and thus economic cost) to contain the more infectious Omicron variant — we are revising down our 2022 growth forecast to 4.3%, from 4.8% previously.”  Goldman expects government policy easing to offset half of the drag from Covid restrictions and assume the negative impact will be concentrated in the first quarter.

The Bank of Japan expressed its most optimistic view of the country's regional economy in more than eight years - a sign of its confidence that a recent resurgence in coronavirus infections would not derail the country's tepid recovery.  BOJ Governor Haruhiko Kuroda said in a speech to the bank's regional branch managers this week, “Japan's economy is picking up as a trend, although it remains in a severe state due to the impact of the coronavirus pandemic.”  The upbeat assessment heightens the chance the BOJ will revise up its growth and price forecasts for the year beginning in April in fresh projections due next week.  Kuroda also said consumer inflation was likely to gradually accelerate on an expected increase in demand.

Finally:  The value of a dollar has plummeted lately with the recent ravages of inflation, but the loss of value is just a more severe and considerably steeper continuation of the long-term decline in the value of a dollar.  As measured by the Consumer Price Index (CPI), the dollar has lost about 40% of its purchasing power just since January 1, 2000.  Once called the “almighty” dollar, it seems that adjective is hardly warranted now. (Chart from wolfstreet.com) 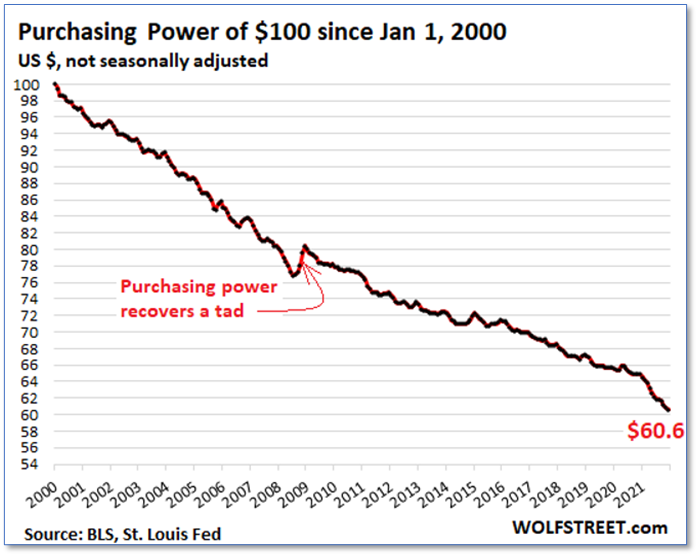