International Markets:  Most of the major international markets finished the week on a positive note as well.  Canada’s TSX added 2.2%, while the United Kingdom’s FTSE 100 gained 3.3%.  On Europe’s mainland, France’s CAC 40 jumped 6.0%, while Germany’s DAX rallied 4.9%.   In Asia, China’s Shanghai Composite closed up 2.2%.  Japan’s Nikkei was the only major index to close in the red, ending the week down -0.5%.   As grouped by Morgan Stanley Capital International, developed markets rose 3.8% and emerging markets surged 5.7%.

Commodities: Precious metals finished the week mixed with Gold rising 2.4% to $1869.70 per ounce, while Silver pulled back -0.2% to $23.98.  Oil had its first down week in four ending down -8.1% to $73.77 per barrel of West Texas Intermediate.  The industrial metal copper, viewed by some analysts as a barometer of world economic health due to its wide variety of uses, closed the week up 2.6%.

U.S. Economic News:  The number of Americans filing for first-time unemployment benefits fell to a three-and-a-half month low last week.  Initial jobless claims declined by 19,000 to 204,000.   Economists had forecast new claims would total 220,000.  New unemployment filings are still historically low, but not quite as low as they were in the spring.  Thirty of the 53 states and U.S. territories that report jobless claims showed a decrease last week.  Meanwhile, the number of people already collecting benefits, known as ‘continuing claims’, ticked down by 24,000 to 1.69 million.   That number remains near a 50-year low.   Economists at Oxford Economics wrote in a note to clients, “The claims data are consistent with a labor market that is still too tight for the Fed and leave the Fed on track to raise rates further in 2023.”

The U.S. added 223,000 new jobs in December—its smallest increase in two years but beating expectations and (most importantly) raising hopes that the economy could be on its way to a “soft landing”—cooling inflation without a significant recession.  Furthermore, the unemployment rate ticked down to 3.5% from 3.6%, matching its lowest level since 1969.  Average hourly earnings rose just 0.3% in December, a tick below expectations.  Over the past year, the increase in wages slowed to 4.6% from 4.8% marking its smallest gain since the summer of 2021.  Slower wage growth should help cool inflation economists say.

The labor market remained robust according to the latest data from the Labor Department.  Job openings in the U.S. pulled back only slightly to 10.46 million in November, down from 10.51 million.  However, the so-called “quits rate”—rumored to be the Federal Reserve’s preferred measure of labor market strength, showed the number of people quitting their jobs remained extraordinarily high at 4.17 million.   Quits have topped 4 million for a record year-and-a-half.  According to Fed officials, the appetite for labor is still too strong and needs to slacken.  The ratio of job openings to unemployed workers has slipped from a record 2.0 last spring, but that’s still too high for the central bank.

The vast services sector, which makes up roughly 70% of the U.S. economy, contracted for a sixth consecutive month in December S&P Global reported.  S&P reported its U.S. Services Purchasing Managers’ Index decreased 1.5 points to 44.7 last month.  The decline in services activity was driven by falls in output and new orders amid waning demand, mainly due to the impact of higher interest rates and inflation on customer spending, the report said.

The manufacturing sector contracted for a second consecutive month in December, slowing at its steepest pace since the onset of the coronavirus pandemic.  S&P Global reported its U.S. manufacturing Purchasing Managers’ Index (PMI) fell 1.5 points to 46.2 in December—its lowest rating since May of 2020.  The contraction was led by faster downturns in output and new orders.   Companies attributed weaker demand to increasing economic uncertainty and higher inflation.  Sian Jones, senior economist at S&P Global stated, “The manufacturing sector posted a weak performance as 2022 was brought to a close.”   On a positive note, weaker activity at the end of the year led to easing price pressures, the survey said.  Both input and output inflation moderated at factory gates, and supply-chain bottlenecks were less apparent than earlier in the year.  The S&P Global U.S. Composite PMI, which tracks activity in both manufacturing and services sectors, fell to 45.0 in December from 46.4 in November.

In the minutes of the latest Federal Reserve Open Market Committee meeting, none of the nineteen top Federal Reserve officials expect it will be appropriate to cut interest rates this year.   Fed officials welcomed recent inflation data that showed a slowing in the pace of price increases.  Furthermore, they stated they wanted to see a lot more evidence of progress to be convinced inflation was on a sustained downward path.  Seventeen of 19 Fed officials said they expected rates to rise above 5% this year.  Officials penciled in the high end of the interest-rate range at 5.25%, with seven officials penciling in even higher rates.  The market expects the Fed to downshift to a 25-basis-point hike at their next meeting, slated for Jan. 31- Feb.1.  Officials said they are trying to balance two risks--doing too little and adding fuel to inflation and raising rates too high and lead to an “unnecessary reduction” in economic activity.

International Economic News:  Canada’s labor market ended the year on a strong note as the economy added 104,000 new jobs in December--well above expectations.   Furthermore, Statistics Canada reported that the unemployment rate fell to 5.0%.  This marks the third decline in the unemployment rate in four months, edging it closer to the record low of 4.9% reached in June and July.  Many economists have been expecting a downturn in the economy to show up in fourth quarter data, but the latest jobs report shows no signs of Canada’s economy slipping.  Royce Mendes, managing director and head of macro strategy at Desjardins stated, “It was an absolutely massive surprise.  The number was over 20 times more than the 5,000 jobs that economists had forecast.”

Across the Atlantic, the United Kingdom will face one of the worst recessions and weakest recoveries of the world’s major economies, economists say.   A clear majority of the respondents to the Financial Times’ annual poll of leading UK-based economists said the inflationary shock caused by the coronavirus pandemic and the Ukraine war would persist for longer in the UK than elsewhere.  This will force the Bank of England to keep interest rates high and the government to run a tight fiscal policy.  More than four-fifths expected the UK to lag its peers.  John Philpott, an independent labor market economist stated, “The 2023 recession will feel much worse than the economic impact of the pandemic.”

On Europe’s mainland, the manufacturing sector in France contracted less than originally reported in December, a survey showed.  S&P Global reported its final December purchasing managers’ index (PMI) for France came in at 49.2—just slightly in contraction territory.  The reading was above the preliminary figure of 48.9 and also marked a recovery from November’s final reading of 48.3.  "France's manufacturing downturn continued into December as the effects of inflation, slowing economic activity and high energy costs weighed on the performance of the sector," said S&P Global Market Intelligence senior economist Joe Hayes.  "However, the strength of the downturn continued to ease, with output and new orders falling at their slowest rates since May and June respectively.  An improvement in business confidence also provides tentative signs that the industrial sector recession may not be as severe as first feared," he added.

Factory orders in Germany, Europe’s economic powerhouse, fell in November as the country’s manufacturers are still struggling even as the economic backdrop improves.  Demand declined 5.3% from the previous month, substantially more than the 0.5% predicted.  The slump was driven primarily by a pullback in foreign orders.  “Today’s figures show that the numerous negative factors affecting the economy are making themselves felt more and more in manufacturing,” said Ralph Solveen, an economist at Commerzbank.  While many companies shut down production due to high energy bills, rising interest rates are also weighing on demand, he said.

In Asia, Japan wants the Group of Seven advanced economies to take a coordinated approach this year aimed at preventing the “economic coercion” that China has applied to some of its trading partners.  Yasutoshi Nishimura, Japan’s Minister of Economy and Trade, said in Washington that actions taken by China in recent years such as suspending imports of pineapples from Taiwan and Australian wine, represent a “clear and present danger” for economies around the world.  “We expect effective responses to economic coercion will be a major item at this year’s G7 summit,” he said.  Japan is the rotating head of the G7 industrial democracies this year and will host the group’s summit.

Finally:  In 2022, investors faced one of the most difficult markets in decades as the Federal Reserve’s efforts to combat the worst inflation since the 1970’s sent stocks and bonds reeling.  Just how bad was it?  Jim Reid, head of thematic research at Deutsche Bank, shows in the chart below that 2022 experienced the worst combined total return for both stocks and bonds at least back to 1872, as far back as comparable records reach.  As both stocks and bonds fell, the much-heralded portfolio of 60% equities and 40% bonds dropped almost 20%, the worst return for this type of a portfolio since 1930.  (Chart from Deutsche Bank) 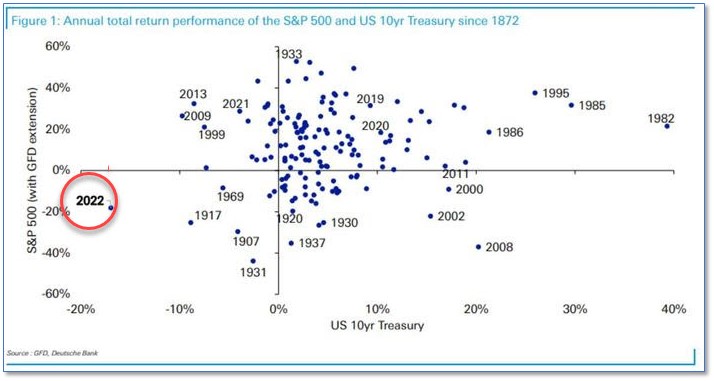