International Markets:  International markets finished the week mixed with most Western markets finishing in the red but with markets in Asia finishing in the green.  Canada’s TSX declined -2.5%, while the United Kingdom’s FTSE 100 retreated -2.9%.  On Europe’s mainland, France’s CAC 40 and Germany’s DAX pulled back -4.6% and -4.8%, respectively.  But in Asia, China’s Shanghai Composite finished the week up 2.8%, while Japan’s Nikkei rose 0.2%--its fourth consecutive weekly gain.   As grouped by Morgan Stanley Capital International, developed markets plunged -5.1%, emerging markets ended down -2.1%.

U.S. Economic News:  The number of Americans filing first time claims for unemployment benefits jumped 27,000 to a nearly six-month high of 229,000.  However, economists stated the entire increase appeared to stem from seasonal adjustments tied to the Memorial Day holiday, instead of actual job losses.  Raw, or actual jobless claims, remained relatively unchanged at 184,604, up less than a thousand from the previous week.  The monthly average of new claims, used by analysts to smooth the weekly volatility, rose by 8,000 to 215,000.  Ian Shepherdson, chief economist of Pantheon Macroeconomics doesn’t expect the strong labor market to falter anytime soon.  Shepherdson wrote, “Widespread anecdotal reports of increased layoffs point to a rising trend in claims over the summer, but we expect the numbers to remain low by historical standards.”  Meanwhile, the number of people already collecting benefits remained unchanged at 1.31 million people.  That reading remains at its lowest level since 1969.

Americans have been pulling out their credit cards to maintain their lifestyles even as inflation continues to rise.  The Federal Reserve reported ‘total consumer credit’ rose by $38.1 billion to a record $4.57 trillion in April.  Economists had been expecting just a $35 billion gain.  The reading represents a 10.1% annual increase, down from a revised 12.7% gain the prior month.  Revolving credit, like credit cards, rose at a 19.6% rate in April to a record $1.1 trillion.  Nonrevolving credit, predominantly made up of auto and student loans, rose at a 7.1% rate to a record $3.5 trillion.  Consumer borrowing has increased at a rapid rate this year, clearly due to rising inflation.

Rising prices for gas, food, and rent, pushed the Consumer Price Index to a 40-year high of 8.6% last month.   The 1% increase in May was more than triple the gain in the prior month.  Economists had expected a 0.7% advance.  The last time inflation rose this rapidly was 1981.  The core rate, which strips out food and energy, increased by 0.6% - a tick higher than expected.  The Federal Reserve views the core rate as a more accurate measure of inflation, but the higher cost of gas and food have generated much of the public and political outcry about inflation.  Furthermore, rising prices show little sign of slowing down.  The sharp increase in May is sure to keep pressure on the Fed to continue raising rates and to be more aggressive.  Sal Guatieri, senior economist at BMO Capital Markets stated, “U.S. inflation sped up in May, with nearly every item zooming higher, and another big core jump suggests the peak might be some ways off.  Fifty basis points is now the minimum the Fed will hike in coming meetings as it races to catch up.”

Sentiment among the nation’s consumers plunged to a record low, according to a preliminary reading from the University of Michigan.  UofM’s gauge of consumer sentiment plunged 8.2 points to 50.2—a reading not seen since the low point reached in middle of the 1980 recession.  The reading was a huge miss from economists’ expectations of a reading of 59.  In the details of the report, a gauge of consumers’ views on current conditions tumbled to 55.4 in June from 63.3 in the prior month, while a barometer of expectations over the next 6 months plunged to 46.8 from 55.2.  Higher gas prices and overall inflation are weighing heavily on sentiment.  The share of consumers citing inflation as the biggest reason for their negative outlooks was the highest since 1981, said economists at Contingent Macro.

International Economic News:  Canada’s yield curve has flattened indicating that investors are anticipating an economic slowdown.  This week, it had the narrowest spread among G7 countries with its gap between 2- and 10- year bond yields at just 14 basis points.   With inflation at a 31-year high, the Bank of Canada raised its policy interest rate from 1.0% to 1.5%, its second consecutive 50-basis-point hike.  The BOC also announced more forceful actions would be taken if necessary.  According to Deputy Governor Paul Beaudry, these more forceful actions could include more moves before pausing, larger than 50-bp increases, or an end rate above the “neutral” 2-3% range.

The Organization for Economic Cooperation and Development (OECD) is forecasting the United Kingdom would experience economic growth holding to 3.6% for 2022 but will fall to zero by 2023 due to depressed demand from high inflation, rising interest rates, and increasing taxes.  The forecast underscores the difficulties a weakened Prime Minister Boris Johnson is likely to face in the months ahead as he tries to shore up support within his Conservative party after surviving a no-confidence vote this week and demonstrate his government can manage the economy effectively.  In response to the OECD report, the UK’s Treasury said: “We recognize many people will be concerned by these forecasts,” adding that “we can’t insulate the UK from global pressures entirely . . . [but] we are supporting people with the cost of living.”

On Europe’s mainland, elections are being held nationwide across France to select the 577 members of the most powerful branch of its Parliament, the National Assembly.  The far-left's Jean-Luc Melenchon, the head of a coalition made up of leftists, greens and communists under the name ‘Nupes’, is seeking to win the election and prevent Macron's party from retaining its current parliamentary majority.   Melenchon wants to significantly increase the minimum wage and lower the retirement age to 60.  He also wants to be prime minister if his coalition gains control.  Macron and his allies are expected to win between 260 and 320 seats, according to latest polls, with the magic number being 289 for Macron’s coalition, ‘Ensemble’, to maintain control.

Germany’s central bank, the Bundesbank, dramatically altered their prior GDP projection of 4.2%, from the end of last year, to just 1.9% for 2022.  The bank claimed economic recovery would most likely continue, but at a “considerably more subdued pace.”  Germany’s Federal Statistical Office reported that in the first quarter of 2022 its economy barely grew by 0.2%.  Inflation in Germany hit 7.9% in May, the highest level since the first oil crisis in the winter of 1973-1974.   The "exceptionally high inflation is expected to stoke uncertainty among consumers and will erode their purchasing power", the Bundesbank said in its outlook.

In Asia, China’s President Xi Jinping ordered all local government and central government departments to strive for “economic, political, and social stability” ahead of the Chinese Communist Party’s twice-a-decade congress later this year.  Xi is widely expected to secure a third term as the party’s general secretary and a new leadership line-up will be unveiled.  “[Government officials] should be diligent in carrying out all the tasks to ensure social stability in order to keep public sentiment stable, and a stable social environment overall,” he was quoted as saying.

Japan’s currency, the yen, fell close to its lowest value in 24 years compared to the dollar, which could trigger new economic challenges globally.  The yen has dropped 14% since January.  Japan's Ministry of Finance, the Bank of Japan and the Financial Services Agency said in a joint statement, “We are concerned about rapid falls in the yen seen in the foreign exchange market recently.”  The drop is a result of a widening gap between bond yields in Japan and the US.  The yen's plunge is escalating Japan's costs for importing fuel, on which Japan is heavily dependent.  Japan’s government is desperate to avoid a cost-of-living crisis ahead of a national election in the coming months, but is at odds with the Bank of Japan which sees a weaker currency as a way to boost overseas profits of Japan’s biggest companies.   The Bank of Japan is now the only central bank among developed nations which hasn’t tightened its monetary policy.

Finally:  If you’re in the market for patio furniture, appliances, large electronics, or other expensive household items you might be in luck.  Big retail’s loss might become your gain.  America’s biggest retailers, Walmart and Target, have a new problem to go along with supply chain issues and a tight labor market—too much inventory.  Target announced this week that it was holding a lot of inventory that has gone out of favor as consumers have switched their spending to travel, entertainment, and less expensive consumer items.  And as taught in Econ 101, the only real way to move huge volumes of merchandise that is no longer in demand is to discount the heck out of it.  So if you’re in the market for any of these items, it’s likely your local Target or Walmart will have it on sale in the near future.  Unfortunately for shareholders, there’s been a big sale on Target and Walmart stock as well.  Target is down 33% year-to-date, and Walmart has shed 15%.  (Chart by chartr.co) 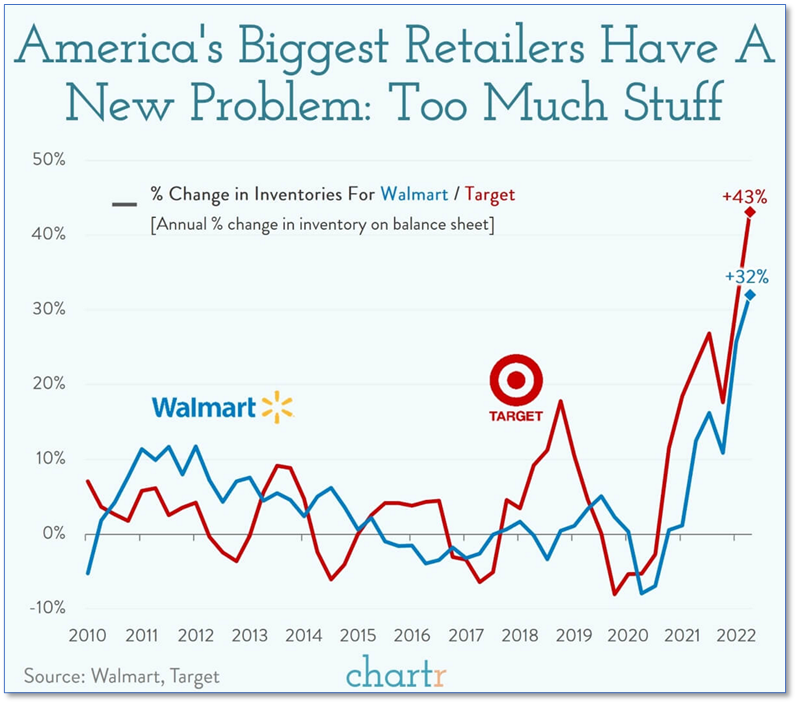