In the markets:   U.S. Markets: The Federal Reserve’s most aggressive rate hike since 1994 raised fears of a recession and sent stocks sharply lower for a second consecutive week.  The benchmark S&P 500 index recorded its worst weekly decline since March 2020 and officially entered a bear market—defined as down more than 20% from a recent high.  All of the major benchmarks finished the week deep in the red.   The Dow Jones Industrial Average shed over 1500 points and gave up the 30,000-level closing at 29,889—a decline of -4.8%.  The technology-heavy NASDAQ Composite, likewise, ended the week down -4.8%.  By market cap, the large cap S&P 500 retreated -5.8%, while the mid-cap S&P 400 plunged -7.6% and the small cap Russell 2000 finished the week down -7.5%.

International Markets:  Major international markets were also a sea of red this week…save one.  Canada’s TSX plunged ‑6.6%, following last week’s decline, while the United Kingdom’s FTSE 100 shed -4.1%.  On Europe’s mainland, France’s CAC 40 and Germany’s DAX finished the week down -4.9% and -4.6%, respectively.  China’s Shanghai Composite was the sole island of green, finishing the week up for a third consecutive week, rising 1%.   In fact, China has only had one down week out of the last six.  Japan had its first down week in five with the Nikkei falling -6.7%.

U.S. Economic News:  The number of Americans filing first-time unemployment benefits remained near a 5-month high, pulling back just slightly from last week.  The Labor Department reported new filings for unemployment benefits fell by 3,000 to 229,000.   Economists had expected new claims to total 220,000.  Chief economist Joshua Shapiro of MFR Inc stated, “The recent move up bears watching to see if it develops into an early signal of developing cracks in the demand for labor.”  The four-week average of new jobless claims, smoothed to iron-out the weekly volatility, rose to 218,500—also the highest level since January.  Mahir Rasheed, economist at Oxford Economics noted, “While the level of claims remains low, and the overall labor market remains extremely tight by historic standards, the latest data suggest that some sectors may be experiencing a modest uptick in layoffs amid rising concerns over inflation.”

The National Association of Homebuilders (NAHB) reported confidence among the nation’s home builders fell for a sixth consecutive month as rising interest rates pushed mortgage rates higher.  The NAHB’s Housing Market Index slipped by two points to 67.  The decline matched economists’ estimates.  One year ago, the index stood at 81.  The June reading of 67 was the lowest since June 2020.  The three gauges that underpin overall builder confidence index also experienced drops.  The gauge that measures current sales conditions fell by one point, while the component that tracks traffic of prospective buyers fell by five points.   The gauge that assesses sales expectations for the next six months fell by two points.  The average rate for a 30-year fixed-rate mortgage rose 25 basis points, from 5.4% to 5.65% for the week ending June 10, according to the Mortgage Bankers Association.

The Federal Reserve demonstrated it wanted to be aggressive in its fight against inflation, enacting the largest interest-rate hike in almost three decades and signaling its benchmark interest rate will rise to nearly 4% by the end of next year.  At the central bank’s meeting, officials said they would hike the federal funds target rate by three-quarters of a percentage point to between 1.5% and 1.75%.  Fed Chairman Jerome Powell said the Fed might raise interest rates at its next meeting by another 75 basis points, but, he cautioned, “I do not expect rate increases of this size to be common.”  In its policy statement, the Fed said it is strongly committed to getting inflation down to 2%.  In its economic forecasts, the Fed expects the economy to slow to a 1.7% growth rate this year and in 2023.  The Fed said it would adjust its interest-rate policy if risks emerge that would “impede” the Fed from its goals.

Confidence among the nation’s small business owners slumped last month, and expectations of future business conditions continued to deteriorate amid persistent inflation, supply shortages, and lack of qualified labor.  The National Federation of Independent Businesses (NFIB) reported its ‘Small Business Optimism Index’ ticked down to 93.1 in May—the second consecutive decline.   However, most concerning is the number of small business owners who expect better business conditions in the next six months declined to an all-time low in the almost 50-year history of the survey.  Inflation pressures broadened.  The percentage of owners raising average selling prices increased two points to 72%, back to the highest reading in 48 years.  NFIB Chief Economist Bill Dunkelberg noted, “Inflation continues to outpace compensation which has reduced real incomes across the nation.”

Prices at the wholesale level jumped again, implying inflation will continue for the foreseeable future.  The government reported its Producer Price Index climbed 0.8% in May, to an annualized 10.8% in May.  Just a year and a half ago, prices were rising at a less than 2% pace.  So-called core wholesale prices, which omit food and energy, rose 0.5% in May.   Higher gasoline prices accounted for the majority of the increase in wholesale inflation, but prices were up across the board.  High inflation at the wholesale level suggests there will be little relief soon at the consumer level.  When companies have to pay more to operate their businesses, they usually pass the price increases onto customers.

Sales at U.S. retailers pulled back in May, the first decline since the end of last year.  Sales were down ‑0.3% as rising inflation weighed on consumers.   The reading was worse than economists’ forecasts of a 0.1% increase.  After adjusting for inflation, real retail sales were actually down -1.0% last month.  Economist Katherine Judge of CIBC Economics wrote in a note, “While it’s only one month, this is a sign that higher prices are starting to thwart consumer demand.”  Retail sales figures are closely watched by analysts as consumer spending accounts for roughly 70% of GDP.

International Economic News:  Canada’s Deputy Prime Minister and Finance Minister Chrystia Freeland announced $8.9 billion in financial support her government has introduced to help Canadians deal with rising inflation.  "We know that Canadians are worried about inflation and that they're asking what their government is going to do about it," Freeland said in a media statement.  Freeland said her plan to address inflation and the affordability crisis has five parts: respecting the role of the Bank of Canada, investing in workers, managing the debt, creating good jobs and funding the suite of programs that make up the Affordability Plan.  Conservative leadership candidate Pierre Poilievre has accused the Bank of Canada and its current governor, Tiff Macklem, of worsening inflation through its pandemic-era policy of quantitative easing.  Freeland responded that criticism of Canada’s central bank is “economically illiterate”.

Across the Atlantic, the United Kingdom’s central bank hiked interest rates for a fifth time since December as it attempts to tame spiraling inflation.  The Bank of England announced it would raise the cost of borrowing by an additional 25 basis points to 1.25%.  “Bank staff now expect GDP to fall by 0.3% in the second quarter as a whole, weaker than anticipated at the time of the May Report,” the Bank of England said in a statement.  Soaring food and fuel prices have plunged millions of Britons into the worst cost-of-living crisis in decades.  Annual consumer price inflation rose to 9% in April--the highest since 1992.  The Bank of England now expects inflation to rise slightly above 11% in October.

On Europe’s mainland, following a recent surge in borrowing costs for many governments of the European Union, Germany’s finance minister stated that there is no need for markets to be worried about the stability of the Eurozone.   Yields for several peripheral euro nations rose last week after the European Central Bank suggested it would tighten monetary policy aggressively but failed to announce any measures to backstop and support the more highly indebted nations.  This created unease among investors, which pushed the yield on the Italian 10-year bond above the 4% threshold for the first time since 2014.  Christian Lindner, Germany’s Finance Minister stated, “The Eurozone is stable, the monetary union has [a] robust character, we have institutions, and we are considering measures to fight inflation, fostering growth and to safeguard the macroeconomic stability.  Yes of course, we are witnessing some rising spreads amongst the member states, but there is no need for any concern.”

China defended its strict “zero-COVID” policy after the U.S. ambassador said it was causing serious damage to the global economy and foreign business sentiment.  Foreign Ministry spokesperson Wang Wenbin said the Chinese economy is recovering from the effects of the pandemic and “facts prove” the policy mandating lockdowns, quarantines and mass testing is “suitable for China’s national conditions and has stood the test of history.”  “We have full confidence that (we can) contain the epidemic, steady the economy and achieve the goal of safe economic development,” Wang said.  China has sought to completely eliminate outbreaks of COVID-19 with tough restrictions, while most other countries are relaxing their anti-coronavirus measures.  U.S. Ambassador Nicholas Burns said China’s “zero-COVID” policy has “had a major impact” on business sentiment, singling out as especially damaging a two-month lockdown in Shanghai, China’s largest city and key financial hub.

The Bank of Japan maintained its ultra-low interest rates and vowed to defend its cap on bond yields with unlimited buying, bucking the global trend of monetary tightening in a world of rising inflation.  The Japanese currency, the yen, fell as much 1.9% and bond yields fell after the decision, which was widely expected.  At the two-day policy meeting this week, the BOJ maintained its -0.1% target for short-term rates and its pledge to guide the 10-year yield around 0% by an 8-1 vote.   The central bank also stuck to its guidance to keep rates at "present or low" levels, and ramped up a program to buy an unlimited sum of 10-year government bonds at 0.25%.  "Raising interest rates or tightening monetary policy now would add further downward pressure on an economy that is in the midst of recovering from the COVID-19 pandemic's pain," Kuroda said.

Finally:  After 27 years, Microsoft’s support for its once dominant internet browser ‘Internet Explorer’ (IE) has come to an end.  At one point, IE’s market share was estimated to be as high as 90%, primarily due to its bundling with the Windows operating system that essentially forced its use over other 3rd party options, like Netscape Navigator.  And while Microsoft has tried to push its current browser “Edge”, it’s had little success there as well—currently holding only about 4% of market share.  The clear current winner is Google’s Chrome browser, whose users report much faster loading speeds and tabs that crash less frequently (and don’t affect your other open tabs when they do). (Chart by chartr.co) 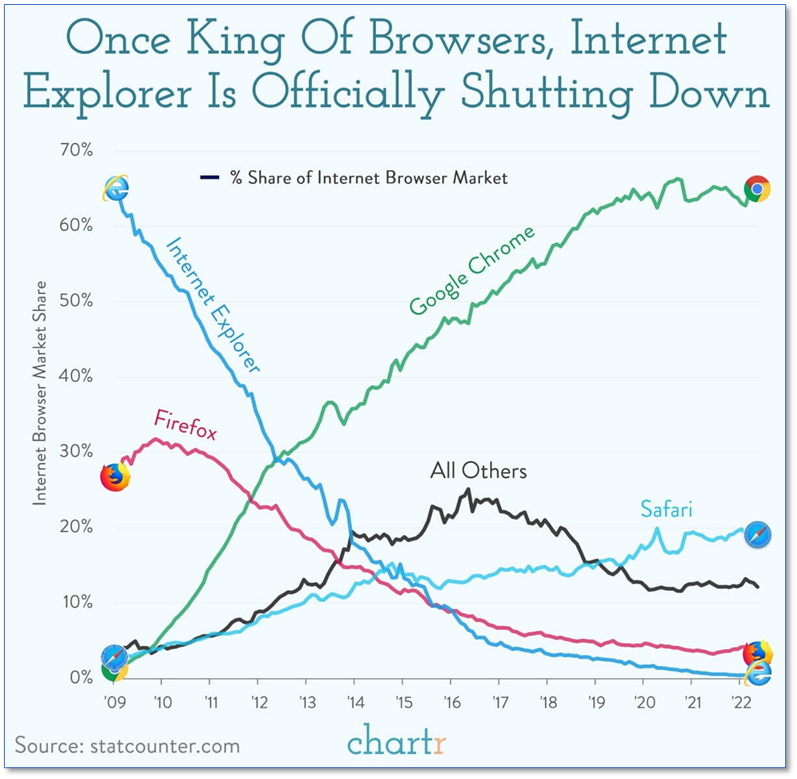