In the markets:   U.S. Markets: Signs that inflation may be moderating amid slowing growth fueled stocks to a sharp rally this week, lifting the benchmark S&P 500 back out of bear market territory.  Nearly every sector in the index recorded strong gains, except energy.  The Dow Jones Industrial Average surged over 1600 points last week finishing at 31,501—a gain of 5.4%.  The technology-heavy NASDAQ Composite jumped 7.5% to 11,608.  By market cap, the large cap S&P 500 rallied 6.4%, while the mid cap S&P 400 gained 5.1% and the small cap Russell 2000 jumped 6.0%.

Commodities:  Commodities mostly retreated for the week.  Precious metals sold off slightly given the strength in the equities markets.  Gold declined -0.6% to $1830.30 per ounce, while Silver gave up -2.1% to $21.13.  Oil finished down fractionally.  West Texas Intermediate crude ticked down -0.3% to $107.62 per barrel.  Brent crude declined -0.4% to $113.19.  The industrial metal copper, viewed by some analysts as a barometer of world economic health due to its wide variety of uses, dropped a sizeable -6.8%.

U.S. Economic News:  The number of Americans applying for first-time unemployment benefits fell slightly last week as jobless claims remained near a five-month high.  The Labor Department reported new filings for unemployment benefits fell by 2,000 to 229,000, suggesting a slight cooling in the red-hot labor market.  Economists had expected claims to total 225,000.  New claims had hit a low of 166,000 in March—the second lowest on record—before moving modestly higher over the past few months.  Meanwhile, the number of people already collecting benefits, known as “continuing claims”, rose by 5,000 to 1.32 million.  That number remains near its lowest level since 1969.

Sales of existing-homes fell for a fourth straight month as prices continued to rise rapidly and mortgage rates increased.  For the first time ever, the median price of a home hit a record $407,600.   The National Association of Realtors (NAR) reported U.S. existing-home sales fell 3.4% to a seasonally-adjusted annual rate of 5.41 million in May.  Compared with the same time last year, sales were down -8.6%.  The decline matched economists’ forecasts.  The median home price was up 14.6% compared to May of 2021.  Furthermore, the number of homes on the market rose 12.6% to 1.16 million units.  That reading is down -4.1% from a year ago and represents a 2.6-month supply of homes on the market.  Analysts generally consider a 6-month supply of homes a “balanced” housing market.   Analysts don’t see housing returning to growth anytime soon.  Lawrence Yun, chief economist at the NAR stated, “I do anticipate further declines in home sales, as the impact of higher mortgage rates has not been fully reflected in the data.”

U.S. businesses suffered sharp slowdowns in June, according to a pair of surveys from S&P.  The S&P U.S. services index fell 1.8 points to a five-month low of 51.6 in June, based on a preliminary “flash” survey.  Readings above 50 signify expansion, while below indicates contraction.   It was a similar story with the U.S. manufacturing index.  That index slid to a nearly two-year low of 52.4—down from 57.  The one positive of the report—weaker demand triggered declines this month in the cost of business supplies and what companies charge.  Chris Williamson, chief business economist at S&P Global, said it could be a sign that inflation has peaked.  “The pace of U.S. economic growth has slowed sharply in June,” Williamson said. “Business confidence is now at a level which would typically herald an economic downturn, adding to the risk of recession.”

Federal Reserve Chairman Jerome Powell appeared in front of both houses of Congress this week.  In remarks to the Senate Banking Committee, Powell said, “The American economy is very strong and well positioned to handle tighter monetary policy.”  He said GDP has picked up since a weak first quarter and that consumer spending remains strong.  Powell told the lawmakers that the central bank is committed to bringing inflation down and that additional rate hikes are coming.  He said that only the size of the upcoming moves has not been decided.   To the House of Representatives, Powell stated he has an “unconditional” commitment to fight inflation.  Krishna Guha, a former Fed staffer now vice-chairman of Evercore ISI, noted that Powell did not use the word "unconditional" in his testimony to the Senate.  Guha said that "unconditional" implies a readiness by the Fed to accept higher unemployment, and a recession, in order to get inflation down.

The sentiment of the nation’s consumers fell to an all-time low this month, reflecting the broad dismay over high inflation—especially food and gas prices.  The University of Michigan reported its Consumer Sentiment Index came in at 50, which was the lowest reading in the 44-year-old history of the survey.  The U.S. is in the midst of its worst inflation in 40 years, consumers are seeing their standard of living decline and businesses are struggling to cope as well.  The Federal Reserve is raising interest rates aggressively to try to tame the surge in prices, but the central bank risks triggering a recession.

The U.S. economy should continue to grow over the next several months, according to St. Louis Federal Reserve President James Bullard.  Bullard made the comments even as some economists and analysts stated a severe recession is inevitable given inflation and rising interest rates.  Bullard expects expansion to continue stating, “On GDP growth, I think that the indicators are that there will be continued expansion in the quarters ahead.”   In addition, he stated that labor market was “as good as you’re ever going to see” right now.  Bullard warned that the current high inflation remains “far above target” and is very risky for the U.S. economy.  Bullard was quick to point out that there are few similarities between now and the last time the U.S. had rampant inflation—the late 1970’s and early 80’s when Paul Volcker was Chairman of the Federal Reserve.  “Modern central banks…have far more credibility than Volcker,” Bullard said.

The U.S. economy expanded in May, but growth cooled sharply compared with the previous month.  The Federal Reserve Bank of Chicago’s National Activity Index (CFNAI) fell to 0.01 in May, from a revised 0.4 in April.   Economists had expected a reading of 0.35.  The CFNAI index is composed of 85 economic indicators from four broad categories of data: production and income, employment, personal consumption and housing, and sales, orders and inventories.   The index is designed to gauge overall economic activity and inflationary pressures with a zero value for the monthly index indicating the economy is expanding at its average trend.  The category which contributed most negatively to the index was personal consumption and housing, which subtracted 0.11 points in May.  Production indicators were also sharply down.

International Economic News:  The International Monetary Fund cut Canada’s global economic growth forecast, but stated Canada is expected to outperform many other global markets in the months ahead.  The IMF cited the concentration in Canada’s economy of energy, agriculture, and other sectors that benefit from rising inflation.  In addition, market experts say that record low unemployment (5.1% in May), rising wages and an open immigration policy also bode well for the country’s economic growth in the near term.  Canada’s growth forecast was trimmed by just two-tenths of a percentage point to 3.9%, the smallest downward revision of all advanced economies.

Across the Atlantic, the United Kingdom’s economy is showing signs of stalling according to a closely watched industry survey.  A preliminary reading of this month’s composite Purchasing Managers’ Index (PMI) in the UK held steady at 53.1—above the median forecast of 52.6.  However, its measure of new orders fell to 50.8, the lowest in over a year.  Factory orders fell into contraction at 49.6.   Chris Williamson, chief business economist at S&P Global Market Intelligence stated, “The economy is starting to look like it is running on empty.”   “Business confidence has now slumped to a level which in the past has typically signaled an imminent recession,” he said, adding that the economy was likely to show a fall in output in the second quarter that could deepen in the third quarter.

On Europe’s mainland, France’s economy is expected to slow more than expected this year, while inflation will climb higher than previously forecast, its central bank said.  The Eurozone's second-biggest economy was set to grow 2.3% this year, before slowing to 1.2% in 2023, the Bank of France said in its quarterly outlook.  The central bank estimated that the fallout from the war in Ukraine would cost France's economy the equivalent of 2 percentage points of gross domestic product over 2022-2024.  Bank of France Governor Francois Villeroy de Galhau stated that, so far, economic activity was proving resilient as household consumption and business investment were holding up.

The German government triggered the “alarm stage” of its emergency gas plan in response to falling energy supplies from Russia but stopped short of allowing utilities to pass on soaring energy costs to customers.  The alert was a message telling households to reduce consumption and warning that industrial output will be hit.  The next stage of its three-stage alert system involves the government taking control of energy distribution and rationing gas supplies.  Germany’s Vice Chancellor Robert Habeck stated, “cutting gas supplies is an economic attack on us by [Russian President Vladimir] Putin.”  Russia stated the reductions were due to needed maintenance on the pipeline.

In Asia, Chinese President Xi Jinping vowed “more forceful” measures to deliver his economic and social development goals for the year.   In his address for the opening ceremony of the BRICS (Brazil, Russia, India, China, and South Africa) business forum, Xi stated China will “step up macroeconomic policy adjustment, and adopt more forceful measures to deliver the economic and social development goals for the whole year and minimize the impact of COVID-19.”  Those goals include unemployment in cities of “no more than 5.5%,” an increase in the consumer price index of “around 3%” and GDP growth of “around 5.5%.”  He did not share details on what kind of measures would be used to reach those goals.

Policymakers at the Bank of Japan warned that excessive volatility in Japan’s currency, the yen, could disrupt corporate business plans and harm the economy, minutes showed.  However, many board members still stressed the need to maintain the Bank of Japan’s massive stimulus program to support the still-fragile economy.  At its April meeting, the BOJ strengthened its commitment to keep interest rates ultra-low by vowing to buy unlimited amounts of bonds daily to defend its yield target, triggering a fresh sell-off in the yen.  The weak yen has become a challenge for Japanese policymakers as it hurts the economy by inflating the already rising costs of importing fuel and raw materials.

Finally:  It turns out that Americans spend more on pharmaceuticals than any other country in the world—and not just more—a lot more.   The OECD reported the average American spends $1376 per year on medications, while Sweden spends just $540.   A new study from Harvard Medical School estimated Medicare could save almost $4 billion per year if it were to purchase medications from a wholesaler, such as billionaire Mark Cuban’s CostPlus Drug Company (www.costplusdrugs.com), rather than the tangled web of private brokers and pharmacies it currently uses.  The study showed that in some specific cases Medicare was being charged 800%+ more than what they could pay if they had gone direct or via Cuban's new company. 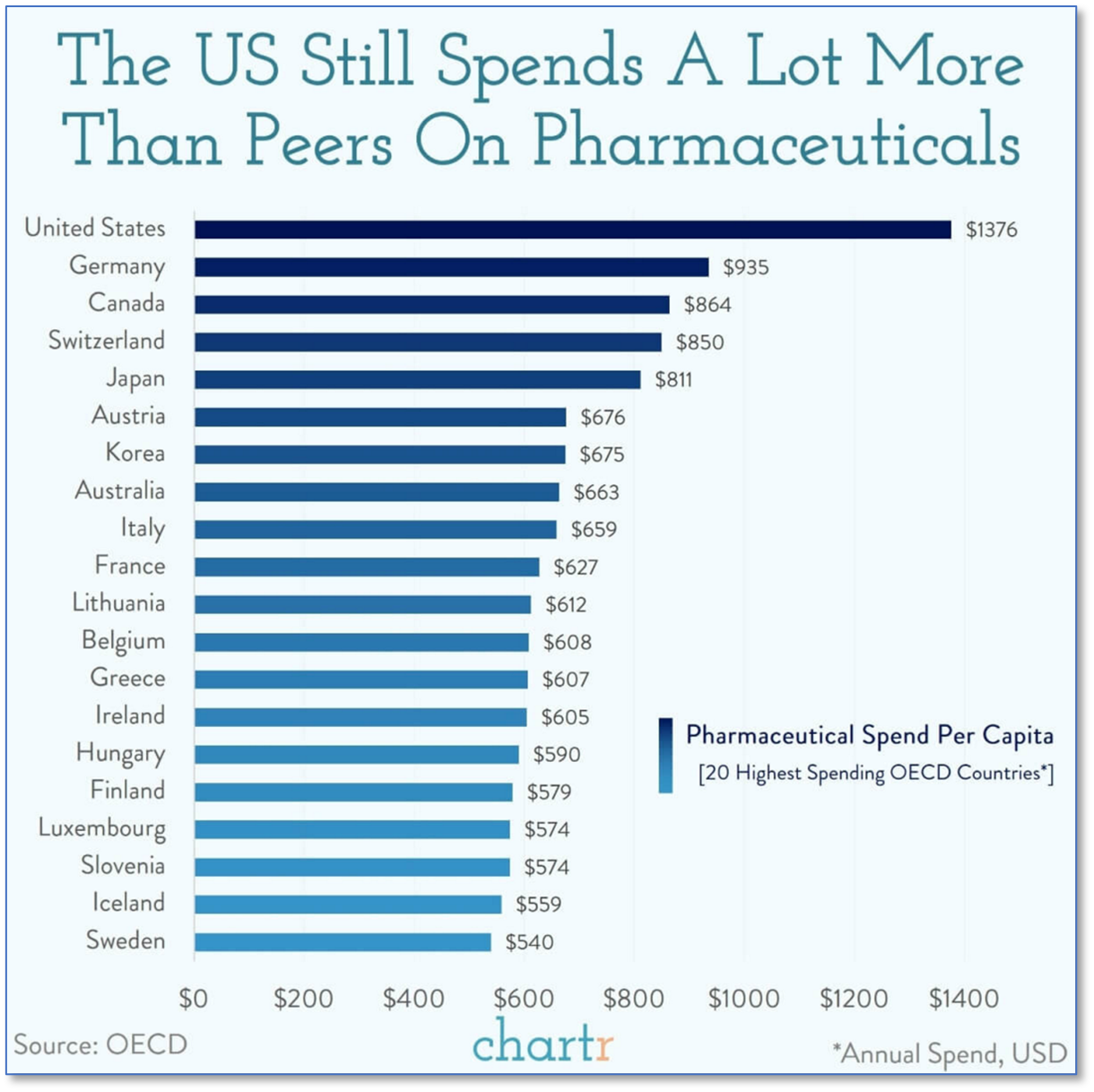