In the markets:   U.S. Markets: Most of the major U.S. benchmark equity indexes suffered a fifth consecutive week of losses as interest rates and inflation worries continued to weigh on sentiment.  The selling briefly pushed the Dow Jones Industrial Average into “correction” territory, down 10% from its recent highs.  After a volatile week, with back-to-back swings of more than 900 points, the Dow finished down just -0.2% to 32,899.  The technology-heavy NASDAQ Composite fared the worst of the bunch giving up -1.5% to 12,145.  By market cap, the large cap S&P 500 ticked down -0.2%, while the mid cap S&P 400 declined -0.8% and the small-cap Russell 2000 finished down -1.3%.

International Markets:  Almost all of the major international indexes finished the week to the downside as well.  Canada’s TSX declined -0.6%, while the United Kingdom’s FTSE 100 fell -2.1%.  France’s CAC 40 and Germany’s DAX ended down -4.2% and -3.0%, respectively, while in Asia, China’s Shanghai Composite gave up -1.5%.  Japan’s Nikkei bucked the trend and managed to finish up 0.6%.  As grouped by Morgan Stanley Capital International, emerging markets ended the week down -3.4% and developed markets fell -2.0%.

Commodities:  Major commodities finished the week mixed.  Precious metals ended the week down with Gold losing ‑1.5% to $1882.80 an ounce, while Silver retreated -3.1% to $22.37.  Energy managed a second week of gains.  Brent crude oil rose 5.4% to $112.39 per barrel, and West Texas Intermediate crude gained 4.9% to $109.77.  The industrial metal copper, viewed by some analysts as a barometer of world economic health due to its wide variety of uses, finished the week down -3.2%.

U.S. Economic News:  The number of Americans filing for first-time unemployment benefits rose by 19,000 to 200,000 last week, the Labor Department reported.  It was the biggest weekly rise in claims since last July and its highest level since February.  Economists had expected just 182,000 new claims.  However, analysts said most of the increase was likely due to seasonal adjustment factors rather than any widespread pickup in layoffs.  Meanwhile, ‘continuing claims’, which counts the number of people already receiving benefits, fell by 19,000 to 1.38 million.  That number remains near its lowest level since the early 1970’s.

The Labor Department reported the country gained 428,000 jobs in April and wages rose, however a shortage of skilled labor weighed on sentiment.  Employment has risen by over 400,000 for 12 consecutive months and the number of people working is expected to return to pre-COVID levels by July.  The unemployment rate remained unchanged at 3.6%.  However, the size of the available labor force shrank in April for the first time in seven months—a further indication of how difficult it is to for companies to find workers.  As a result, the so-called rate of participation in the labor market dropped to 62.2% from 62.4%.  The increase in hiring in April surpassed Wall Street’s estimate.   Economists polled by the Wall Street Journal had forecast 400,000 new jobs.

The vast ‘services’ side of the U.S. economy, which makes up roughly two-thirds of GDP, pulled back this month according to the latest data from the Institute for Supply Management (ISM).   ISM reported its index of business conditions at service-oriented companies fell 1.2 points to 57.1.  Economists had expected a reading of 58.3.  ISM signaled that labor and supply shortages as well as high inflation are all weighing on the economy.  In the report, the ‘prices-paid’ index, a measure of inflation, rose to a record high.   “Inflation, supply chain issues and access to qualified workers continue to be issues,” an executive in public administration told ISM.  “Cost pressures are beginning to slow demand,” said a wholesale executive.

In a similar report, ISM’s manufacturing index fell 1.7 points to 55.4 in April as the industrial side of the economy grew at its slowest pace in a year-and-a-half.  Economists had expected the index to rise to 57.8.  Inflation and shortages in supplies and labor were seen as the reason for this miss.  “Inflation is out of control,” one chemical-industry executive told ISM.  “At some point, the economy must give way. It will be tough to have real growth with such pressure on costs.”  Furthermore, the situation isn’t expected to improve anytime soon.  Timothy Fiore, chairman of the survey, stated the lockdowns in China are expected to cause “some pretty significant problems” in the near future.  In the details, the index of new orders slipped 0.3 points to 53.5—that was the lowest reading since the economy was shut down in May 2020.  Meanwhile, the employment gauge sank 5.4 points to 50.9—an eight-month low.

The Federal Reserve raised its key interest rate a half percentage point this week and reaffirmed its more aggressive strategy to try and subdue the worst rise in inflation in 40 years.  As part of its two-pronged strategy, the central bank also said it would reduce its $9 trillion stockpile of treasury bonds and mortgage-backed securities starting on June 1.  As its clear inflation is no longer ‘transitory’, Fed Chairman Jerome Powell admitted, “Inflation is much too high and we understand the hardship it is causing.”  The central bank as expected lifts its benchmark fed funds rate to a range of 0.75% to 1% in what’s expected to be a series of increases.  It was the second rate hike this year and the biggest since 2000.  Powell also said further 1/2-point rate increases are on the table for upcoming meetings, but that larger 3/4-point rate increases are not presently being considered.  The Dow Jones Industrial Average rallied more than 900 points on that news, but gave it all back the following day.

International Economic News:  Saskatchewan was the only Canadian province to see a drop in its gross domestic product last year—largely due to a severe drought that slashed farmers’ yields and devastated crop quality, analysts say.  Statistics Canada's latest GDP numbers, released this week, generally showed a strong economic recovery last year, with every Canadian province and territory posting positive GDP growth--except Saskatchewan, where GDP was down 0.3%.  To the West, Alberta saw 5.1% growth, while just to the east Manitoba’s was up 1.2%.   Premier Scott Moe said that had the province not experienced the drought, it would have been on track to record a 3.5% increase in GDP last year.

Across the Atlantic, the Bank of England warned the United Kingdom faces a “sharp economic slowdown” this year as it raised interest rates in an attempt to slow the pace of rising prices.  The central bank raised rates 0.25% to 1%--their highest level since 2009 and their fourth consecutive increase since December.  Inflation in the UK is at a 30-year high and set to hit 10% by the fall.  As a result, households have been reining in their spending which is weighing on growth.  Bank of England governor Andrew Bailey defended raising rates at a time when the cost of living is increasing, saying that the risk of letting inflation get out of control was higher.  "We are in a very difficult position at the moment," Mr. Bailey said.  The bank's policymakers now expect the UK economy to shrink rather than expand in the final three months of this year.  It is also expected to contract by 0.25% in 2023, down from its previous forecast of 1.25% growth.

On Europe’s mainland, new figures from France’s National Institute of Statistics and Economic Studies (INSEE) indicate France could be entering a period of ‘stagflation’—a term used to describe a stagnant economy with rising inflation.  Inflation rose once again in April to reach 4.8%, according to initial estimates.   Thierry Breton, the European commissioner for the internal market stated, “The inflation is essentially due to increases in energy prices.”  "In France and all European countries, spending on transport and energy has become an enormous burden on household budgets,” economist Stephanie Villers said.   Data from INSEE shows household spending in France fell by 1.3% in March, correlating with a first trimester that saw gross domestic product came to a standstill.

Germany is ready to support a European ban on imports of Russian oil, according to its Finance Minister Christian Lindner.  "Germany stands ready for new sanctions, including an oil embargo," he said.   In an interview Lindner stated Germany won’t be “blackmailed” by Moscow into paying for natural gas in rubles.  Last year, Russia accounted for about 27% of EU oil imports.  It also supplied about 40% of Europe's natural gas.  EU leaders have already promised to slash Russian gas imports by 66% this year, and to break the bloc's dependency completely by 2027.  Lindner admitted it “will take more time to be independent from Russian natural gas imports.”

In Asia, China’s massive services side of its economy has gone into contraction at its second sharpest pace on record.  The slowdown comes as zero-tolerance COVID lockdowns continue to essentially close some of its largest cities.  The Caixin purchasing managers' index, a closely-watched indicator for assessing the state of the economy, plummeted to 36.2 in April from 42 in March.  The services sector accounts for more than half of China's GDP and over 40% of its employment.  And with survey data showing China's manufacturing sector also shrinking last month, the world's second biggest economy went backwards in April.  The nearly 6-point decline in services activity in April was second only to the collapse in February 2020, when China's economy came to a near standstill as it battled to contain the initial coronavirus outbreak.

None of Japan's major corporations see the rapid fall in the nation’s currency as positive for the domestic economy, even as a currency's weakening typically benefits a nation’s exports, a Kyodo News survey showed.  The Japanese currency has lost around 15 yen or 12% since early March to 20-year lows against the U.S. dollar.  A weaker yen boosts profits earned overseas when translated back into yen and makes Japan-made products more price competitive abroad.  Bank of Japan Governor Haruhiko Kuroda maintains his view that the positive effect of a weak yen outweighs the negative for the world's third-largest economy.  However, analysts noted the yen's drop only adds to worries that it could weigh on businesses and households through higher import costs of energy and other commodities.

Finally:  On Thursday the NASDAQ Composite Index fell 5%, its biggest one-day decline since 2020.  However, looking beneath the surface reveals problems in the tech-heavy index that have existed for quite some time.  E-commerce behemoth Shopify fell 15% after posting its slowest revenue growth in 7 years, with its shares down 70% year-to-date, while Netflix’s high-profile meltdown has seen its shares fall 69%.  Indeed, out of the 192 large stocks in Technology and Communication Services, over 160 are down this year.  With the benchmark S&P 500 index down about 14% this year, every sector has lost ground except two—energy and utilities. (Chart by chart.co) 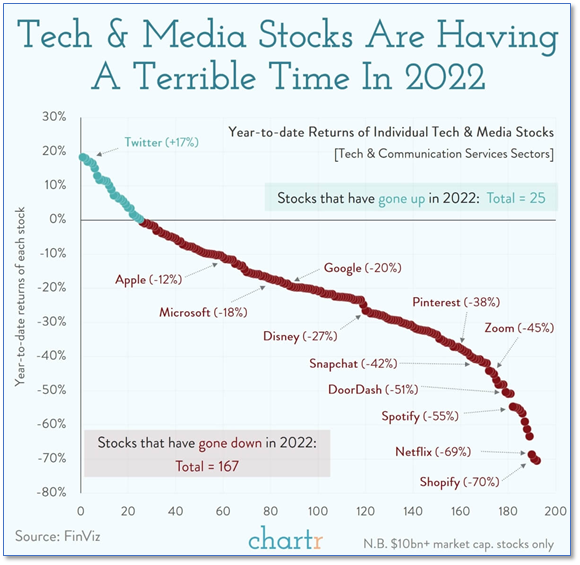