In the markets:   U.S. Markets: The major U.S. indexes finished the week mixed as investors weighed strong economic data with concerns over rising inflation, ongoing supply shortages, and a sporadic rise in coronavirus infections in some areas of the country.  The Dow Jones Industrial Average shed 498 points finishing the week at 35,602 - a decline of -1.4%.  In contrast, the technology-heavy NASDAQ Composite gained 1.2%, closing at 16,057.   By market cap, the large cap S&P 500 managed a 0.3% gain for the week, while the mid cap S&P 400 retreated -1.1% and the small cap Russell 2000 declined -2.8%.

Commodities:  Commodities finished the week predominantly to the downside.  Gold declined -0.9% to $1851.60 per ounce, while Silver fell -2.2% to $24.78.   The industrial metal copper, viewed by some analysts as a barometer of world economic health due to its wide variety of uses, finished the week down -0.9%.  West Texas Intermediate crude oil plunged -6.0% to $75.94 per barrel as Austria’s announcement of a new lockdown starting next week sent transportation and energy stocks reeling.

U.S. Economic News:  The number of Americans filing first-time unemployment benefits fell for a seventh consecutive week and is nearing pre-pandemic lows amid the biggest labor shortage in decades.  The Labor Department reported new filings for initial benefits slipped by 1,000 to 268,000 last week.  Economists had estimated new claims would total 260,000.   New jobless claims fell the most last week in Kentucky, Michigan, Tennessee and Ohio, all states with large auto-producing industries.  Carmakers had recently idled some plants due to parts shortages.  The only state to post a big increase in jobless claims was California.  Meanwhile, “continuing claims”, which counts the number of people already receiving benefits declined by 129,000 to 2.08 million.  This number is also at a pandemic low.

Homebuilders grew more confident this month, as demand for housing remained strong despite continued pressures from supply and labor shortages.  The National Association of Home Builders (NAHB) reported its monthly confidence index rose three points to 83 in November.  It was the highest reading since May.  In the report, the sub-indexes that measure current sales conditions and traffic of prospective buyers each rose three points as well.  The gauge that assesses sales expectations for the next six months remained unchanged from the previous month.  Regionally, every part of the country experienced a monthly increase in confidence among home builders except the Northeast, where confidence waned.  In addition to shortages of building supplies and skilled labor, the NAHB noted another constraining factor in home-builders’ ability to construct new houses—a shortage of available lots.   Robert Dietz, chief economist at the National Association of Home Builders, wrote in its report, “Lot availability is at multi-decade lows and the construction industry currently has more than 330,000 open positions.  Policymakers need to focus on resolving these issues to help builders produce more housing to meet strong market demand.”

Sales at the nation’s retailers rose at their fastest pace in seven months in October, but analysts noted all was not well under the surface.  The Census Bureau reported sales surged 1.7% last month—their biggest gain since March when the government rolled out billions in stimulus money.  Economists had expected a reading of 1.5%.  However, the problem is at least half of the increase in retail sales totals was attributed to inflation.  A separate government survey last week showed consumer prices rose almost 1% in October amid the biggest surge in inflation in 31 years.  In the details of the report, sales rose 4% at internet retailers, 3.8% at electronics and appliance stores, and 2.2% at department stores.   Increases in these sectors show Americans still have plenty of appetite for most consumer goods even though they are paying higher prices.

U.S. industrial output surged last month, recovering the previous month’s entire decline.  The Federal Reserve reported industrial production rose 1.6% in October.  Economists had expected just a 0.8% gain.  Furthermore, capacity utilization rebounded to 76.4% from 75.2% the prior month.  The capacity utilization rate reflects the limits to operating the nation’s factories, mines and utilities.  Economists had forecast a 75.8% rate.   The main reason for the increase was a significant rebound in car manufacturing and the recovery from the effects of Hurricane Ida which hit the U.S. Gulf Coast in late August.  Motor vehicles and parts output surged 11% after a 7.1% decline in the prior month.

Manufacturing activity in the New York region rebounded this month according to the latest data from the New York Federal Reserve.  The NY Fed reported its Empire State manufacturing index jumped 11.1 points to 30.9 this month.  The reading far exceeded economists’ expectations of a reading of 22.  In the report, the new-orders index rose 4.5 points to 28.8, while the shipments index soared 19.3 points to 28.2.  On the inflation front, the prices-received index hit a record high, while the prices-paid reading was just off its record high.  However, respondents are increasingly worried about the next six months.   The expectation index fell 15.1 points to 36.9.  Economists and investors use the Empire State index as an early gauge of the strength of the national ISM November factory index, to be released early next month.

International Economic News:  The Bank of Canada stated it will not raise its benchmark interest rate until the slack in the country’s economy is absorbed.  Governor Tiff Macklem made the comments in an op-ed for the Financial Times newspaper.  Furthermore, Macklem also noted that while inflation risks have risen, the central bank continues to view the recent dynamics as transitory.  He added that the central bank's policy framework--a flexible inflation target focused on the 2% midpoint of a 1-3% control range--means Canadians can be confident that inflation will be kept under control while supporting a full recovery, said Macklem.  Canada's inflation rate rose to 4.4% in September and is expected to hit 4.7% in October.

Andrew Bailey, governor of the Bank of England, has told members of parliament that he’s “very uneasy” about the United Kingdom’s inflation situation, in comments that suggests he could vote for an interest rate rise soon.  Testifying to the Treasury Committee, Bailey said this month’s vote to leave interest rates on hold was a “very close call.”  The Office of National Statistics reported 160,000 new jobs created in October, despite the end of the UK’s wage subsidy program.  The data reinforces the case for the Bank of England to raise interest rates as early as next month to rein in inflation.

On Europe’s mainland, French Industry Minister Agnès Pannier-Runacher said that the government was “very cautiously” monitoring Europe’s latest wave of Covid-19 infections, urging citizens to get vaccinated to ensure stricter measures won’t be necessary.  The World Health Organization has once again recognized Europe as “at the epicenter” of the coronavirus pandemic, with the region accounting for the vast majority of new cases and deaths in recent weeks.  France recorded more than 20,000 new daily infections as the latest wave of the epidemic picks up speed.  Around 69% of the French population is fully vaccinated against the coronavirus.   That’s slightly higher than the vaccination rate in Austria and Germany, although significantly behind countries like Spain and Portugal.

Austria will become the first country in Western Europe to reimpose a full COVID-19 lockdown, it said on Friday and neighboring Germany warned it may follow suit.  A fourth wave of infections has plunged Germany, Europe's largest economy, into a national emergency, Health Minister Jens Spahn said.   Austrian Chancellor Alexander Schallenberg stated that nation’s lockdown would start on Monday of next week and all civilians would be required to be vaccinated before February 1st.  Asked if Germany could rule out an Austrian-style full lockdown, Spahn said: "We are now in a situation--even if this produces a news alert--where we can't rule anything out.  We are in a national emergency," he said.

In Asia, China’s economic growth is likely to deteriorate further next year as rising risks of fallout from the property market and Beijing’s zero-tolerance approach to the coronavirus could weigh on its economy, analysts say.  Recent outbreaks of the Delta variant have prompted travel restrictions and lockdowns in some cities in China, while Beijing’s tough stance on deleveraging the property sector, which contributes 14% to China’s gross domestic product (GDP), will further slow growth in the coming months, according to Andrew Fennell, senior director at Fitch Ratings.  China’s economy grew by 4.9% in the third quarter of 2021 compared with a year earlier, down from the 7.9% growth seen in the second quarter.  Fitch has also lowered its 2022 GDP growth forecast to 5.2% from 5.5%.

Japan’s government agreed to spend $490 billion on stimulus measures, a move by its prime minister to boost an economy battered by coronavirus restrictions and by a supply chain crunch that has affected the country’s largest manufacturers.  The stimulus package, Japan’s largest to date, accounts for about 10% of the country’s economic output, officials said.  “I want to bring Japan’s economy, which has been severely damaged, onto a trajectory of recovery,” Prime Minister Fumio Kishida said.  The package includes aid to struggling businesses and hospitals, money for strengthening semiconductor supply chains, and programs to encourage domestic tourism and investment in a nationwide university endowment fund.

Finally:  To paraphrase the famous line from the Humphrey Bogart movie “The Treasure of the Sierra Madre”, recent IPOs seem to be saying “Profits?  We don’t need no stinkin’ profits!”  Rivian Automotive, a maker of electric “adventure vehicles” based in Irvine California recently went public with an eye-watering first-day valuation of $105 billion.  This is a higher valuation than both Ford, whose valuation is $78 billion, and GM at $90 billion.  There’s just one slight problem - Rivian does not make a profit.  In fact, according to Professor Jay Ritter at the University of Florida’s Warrington College of Business, in the last year only about 20% of IPO’s were by companies that actually made money.  This is a complete reversal since the 80’s, when 80% of IPOs were profitable.  And it is reminiscent of 2000, when a similarly tiny percentage of IPOs were profitable - right before the dot.com crash.  (Data: Professor Ritter, Chart: chartr.co) 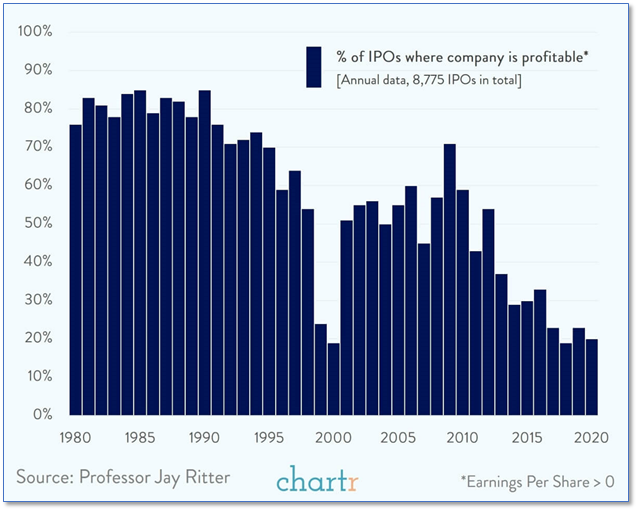