In the markets:   U.S. Markets:  All but one of the major U.S. indexes were lower this week, as third-quarter earnings reporting season began in earnest and investors weighed inflation data and their implications for Federal Reserve policy.  By the end of the week, the S&P 500 Index had surrendered nearly half of its gains since its March 2020 bottom.  The Dow Jones Industrial Average added 338 points finishing the week at 29,635—a gain of 1.2%.  But it was the only major domestic index to do so.  The technology-heavy NASDAQ Composite, in contrast, finished the week down -3.1%.  By market cap, the large cap S&P 500 index declined -1.6%, while the mid cap S&P 400 index retreated -1% and the small cap Russell 2000 index finished the week down -1.2%.

International Markets:  Major international markets were mixed on the week.  Canada’s TSX pulled back -1.4%, while the United Kingdom’s FTSE 100 ended down -1.9%.   On Europe’s mainland, France’s CAC 40 and Germany’s DAX rose 1.1% and 1.3% respectively, while in Asia, China’s Shanghai Composite added 1.6%.  Japan’s Nikkei ticked down -0.1%.  As grouped by Morgan Stanley Capital International, developed markets pulled back -1.4%.  Emerging markets ended the week down -4.0%.

Commodities:  Gold and silver pulled back with the weakness in the equities markets.  Gold retreated -3.5% to $1648.90 per ounce, while Silver plunged -10.8% to $18.07.  West Texas Intermediate crude retreated -7.6% to $85.61 per barrel.  The industrial metal copper, viewed by some analysts as a barometer of world economic health due to its wide variety of uses, finished the week up 1.1%.

U.S. Economic News:  The number of Americans filing first time unemployment benefits rose last week, but remains near historic lows.  The Labor Department reported initial jobless claims rose by 9,000 to 228,000.  Economists had forecast an increase to just 225,000.  Claims have risen in three of the last four weeks.  The latest reading was its highest level since August.   Meanwhile, continuing claims, which counts the number of people already receiving benefits rose by 3,000 to 1.368 million.

Confidence among the nation’s small-business owners increased slightly last month but remained depressed as inflation continues being a huge problem for businesses.  The National Federation of Independent Business (NFIB), a small-business lobbying group, reported its Optimism Index rose 0.3 point to 92.1 in September.   Economists had expected a reading of 91.8.  September marks a third consecutive month of gains for the index, which remains low according to historical standards. The overall improvement in confidence was mainly driven by better prospects for sales, although other components also posted increases.  In its release, NFIB Chief Economist Bill Dunkelberg said, “Inflation and worker shortages continue to be the hardest challenges facing small business owners.”  Still, “even with these challenges, owners are still seeking opportunities to grow their business in the current period," he said.

Prices at the wholesale level rose for the first time in three months—however the increase was double the Wall Street forecast.  The Bureau of Labor Statistics (BLS) reported prices at the Producer level (PPI) rose 0.4% in September, signaling inflation continues to rise despite the current interventions by the Federal Reserve.  Economists had expected just a 0.2% gain.  Over the past year, the increase in wholesale prices pulled back slightly to 8.5% from 8.7%.  Core PPI, which strips out the volatile food and energy segments, increased 0.4% last month.   The reading of Core PPI was also larger than expected.  The increase in these so-called core prices over the past year was flat at 5.6%.  Chief U.S. economist Rubeela Farooqi of High Frequency Economics stated, “While they are off their peaks, producer costs are still rising at a fast pace.”

At the consumer level, prices rose again in September suggesting that inflation will persist at least through the end of the year.  The BLS reported its Consumer Price Index (CPI) increased 0.4% last month bringing the annual rate of inflation to 8.2%.  Economists had forecast a 0.3% increase.  Notably, in the report, the cost of groceries surged again—up 13% over the past year.   The last time food prices rose that fast was in 1979.  However, what initially rocked markets was a sharp jump in the “core” rate of inflation in the CPI (ex-food and energy).  Core CPI jumped 0.6%, 0.2% higher than estimates.  The increase in the core rate over the past year climbed to a new cycle high of 6.6%--its biggest gain in 40 years.  It is widely thought that the Fed views the core rate as a more accurate measure of future inflation trends.  With inflation still running hot, most analysts expect at least a 75 bps rate increase at the Fed’s next meeting.  Indeed, Seema Shah, chief global strategist at Principal Asset Management wrote in a research note, “After today’s inflation report, there can’t be anyone left in the market who believes the Fed can raise rates by anything less than 75 basis points at the November meeting.”

Sales at the nation’s retailers were flat last month as high inflation and rising interest rates continued to take spending power out of the pockets of consumers.  Backing out inflation means that fewer “things” were purchased by consumers than a year ago.  Chief economist Gregory Daco of EY Parthenon summed up the report stating simply, “Consumers are spending more dollars, but they’re getting fewer items.”

International Economic News:  The International Monetary Fund (IMF) has warned of a further economic slowdown for Canada and called on federal and provincial governments to moderate their spending.  In its report, the IMF wrote that despite coming through the pandemic “relatively well” and not having been significantly affected by Russia’s invasion of Ukraine, Canada’s “inflation is well above target, housing affordability is a major concern following a long boom that may now have peaked, and the pandemic remains a source of risk.”  “[We] expect a substantial further cooling of the economy, with risks to growth tilted to the downside, and shocks could easily push the economy into a mild recession,” the report added.  “Revenue windfalls at both federal and provincial levels should be saved,” it concluded.

Across the Atlantic, the United Kingdom’s economy shrank by 0.3% in August, hit by a slump in manufacturing and a slowdown in the oil and gas sector, official data showed.  Kwasi Kwarteng, the chancellor, blamed the global situation for the decline and especially the war in Ukraine, which has sharply increased energy costs.   “Countries around the world are facing challenges right now, particularly as a result of high energy prices driven by Putin’s barbaric action in Ukraine,” he said. (Kwasi Kwarteng was fired by PM Liz Truss later in the week)

On Europe’s mainland, the French economy likely grew by 0.25% in the third quarter, a slight downgrade from a previous forecast of 0.3%.  The Bank of France attributed the downgrade to poor industrial activity.  "In an economic environment marked by the energy crisis and difficulties in supply and recruitment, activity continues to be resilient overall, but industry is more affected than other sectors", the Bank of France said.   Business activity in the country's struggling industrial sector was flat in September while the services sector grew further, the bank said in its monthly economic outlook based on a survey of business leaders.  Companies facing the most difficulties are those with the highest energy needs, Bank of France Governor Francois Villeroy de Galhau stated.

Germany’s finance minister said fighting inflation was the government’s biggest priority and demanded reforms that would lift Europe’s largest economy out of an imminent slowdown.   Christian Lindner said Germany had slipped behind other countries because it was especially vulnerable to Europe's energy crisis and supply chain disruptions and had complacently believed in its own economic strength.  “Inflation is the biggest danger for our economic foundation. Inflation can bring that foundation to erosion," Lindner said.  The latest forecasts suggest Germany is on the brink of recession, and the central bank sees inflation staying above 7% next year, pushed up by rocketing gas prices due to an energy standoff between the West and Russia over Ukraine.

In Asia, the International Monetary Fund (IMF) lowered its growth estimate for China’s economy this year, saying the country’s slowdown, the Ukraine war and inflation triggered by aggressive US monetary tightening are the three main headwinds facing the global economy. The IMF forecast the world’s second largest economy to expand by 3.2% in 2022, slightly lower than its previous estimate of 3.3%, according to its latest World Economic Outlook.  In addition, the IMF cut China’s forecast for next year by 0.2% to 4.4%--far below the 8.1% expansion seen in 2021.  China’s economic outlook is dimming due to a number of factors, including Beijing’s hardline zero-Covid policy, a property sector downturn and a volatile geopolitical situation.

Japanese Prime Minister Fumio Kishida has signaled his support for the Bank of Japan’s ultra-loose monetary policy despite the yen’s plunge to its lowest level in real terms since the 1970s.   In an interview, the Japanese prime minister said the central bank needed to maintain its policy until wages rose and urged companies that did increase prices to raise pay as well.   Kishida said he would continue to “work closely” with Haruhiko Kuroda, ruling out speculation he would end the BoJ governor’s term prematurely or apply political pressure to end negative rates.   In a signal of how starkly the economic challenges in Japan contrast with those in other advanced economies that are wrestling to protect the public from runaway inflation, Kishida said the country needed wage increases rather than wage restraint.

Finally:  Following World War 2, the United States was a global industrial behemoth with more than 40% of all private sector jobs in manufacturing.  Today, that number is less than 10%.  However, the latest jobs report shows “made in America” is at least attempting to make a comeback.  September’s report showed the U.S. now has the largest manufacturing workforce since the financial crisis of 2008, with almost 13 million workers employed in manufacturing.  With fragile supply chains and the skyrocketing cost of international shipping, domestic production is now becoming more and more attractive and even economical.  (Chart from chartr.co) 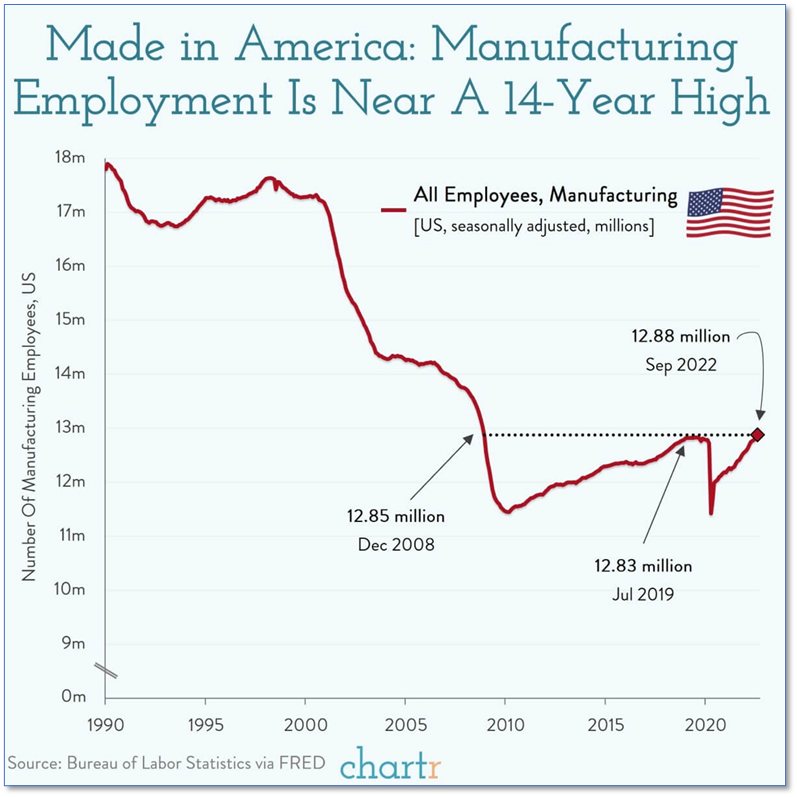