In the markets:   U.S. Markets: U.S. Stocks broke their string of three consecutive weekly losses as investors appeared to grow more confident that the market had reached at least a temporary bottom.  Some indications that inflation may be moderating likely also played a part.   The Dow Jones Industrial Average rose 833 points finishing the week at 32,152—a gain of 2.7%.  The technology-heavy NASDAQ Composite retraced almost all of last week’s decline rising 4.1%.  By market cap, the large cap S&P 500 added 3.6%, while the mid cap S&P 400 and small cap Russell 2000 finished the week up 4.4% and 4.0% respectively.

International Markets:  Like the U.S., major international markets were a sea of green across the board.  Canada’s TSX added 2.6% while the United Kingdom’s FTSE 100 rose 1%.  On Europe’s mainland, France’s CAC 40 and Germany’s DAX added 0.7% and 0.3% respectively.  In Asia, China’s Shanghai Composite rose 2.4% and Japan’s Nikkei gained 2.0%.  As grouped by Morgan Stanley Capital International, developed markets rallied 3.3% and emerging markets were up 0.6%.

Commodities:  Precious metals finished the week in the green.  Gold rose 0.4% to $1728.60, while Silver surged 5% to $18.77.  Oil closed down for a second consecutive week.  Brent crude oil retreated -0.2% to $92.84 per barrel, while West Texas Intermediate ended down -0.1% to $86.79.  The industrial metal copper, viewed by some analysts as a barometer of world economic health due to its wide variety of industrial uses, finished the week up 4.5%.

U.S. Economic News:  The number of Americans filing for first-time unemployment benefits fell to a 3 ½ month low last week, a sign the labor market remains resilient even as the overall economy softens.  The Labor Department reported new jobless claims declined by 6,000 to 222,000—its fourth consecutive decline.  Economists had expected an uptick to 235,000.  New claims had fallen as low as 166,000 in late March before turning higher over the summer.  They recently topped out at 261,000 before rolling over again.   Meanwhile, the number of people already collecting unemployment benefits rose by 36,000 to 1.47 million.  That number remains near a 50-year low.  Thomas Simons, economist at Jefferies LLC noted, “There is a little bit more turnover in the labor market than what we experienced last year and early in 2022, but it remains the case that workers who are let go are still having a relatively easy time finding a new job.”

Investors looking for some clarity on the condition of the vast ‘services’ (roughly 70% of GDP) side of the U.S. economy were left wanting following the release of a pair of reports from ISM and S&P.  The Institute for Supply Management (ISM) reported their barometer of business conditions at companies such as restaurants and hotels rose to 56.9 In August, up from 56.7 in the prior month.  It exceeded the consensus forecast for a drop to 55.5 and was the highest reading since April.  However, a separate report from S&P Global Market Intelligence showed their measure—the U.S. Services PMI Business Activity index fell to 43.7—down 3.6 points from July.   It was that index’s weakest reading since May 2020.  Chris Williamson, chief business economist at S&P Global stated the slide underscores the risk of a “deepening recession” as households and businesses grapple with the rising cost of living.  With more insight into this stark contrast, Josh Shapiro, chief U.S. economist at MFR Inc. said that divergences in the past have tended to be resolved with ISM weakening to a level more consistent with the PMI.

The Federal Reserve’s ‘Beige Book’, a collection of anecdotal reports from each of the Federal Reserve’s member banks, stated the U.S. economy is likely to get weaker as the Fed battles rising inflation.  The economy grew slightly through the end of August, the Beige Book survey found, but the outlook for the economy over the next year “remained generally weak”.  Of relief to consumers, the survey said the sharp increase in prices earlier in the year has begun to fade, but that inflation “remained elevated”.  Inflation reached a nearly 41-year high of 9.1% in June.  In addition, shortages of labor and supplies, while less acute, still “continued to hamper production.”  Of note, “increased talk of recession” has become more common.  Fed officials say they are not trying to trigger a recession, but they acknowledge there’s a growing risk of one as they try to tame high inflation.

Federal Reserve Chair Jerome Powell said this week the central bank won’t be distracted by political interference as it lifts interest rates higher to try to bring inflation down.  Powell said, “I can also assure you that we never take into consideration external political considerations,” at a Cato Institute monetary conference.  So far, Powell has had the support of President Joe Biden but progressive Democrats, including Sen. Elizabeth Warren, have argued that rate hikes will lead to too much unemployment.  In other remarks at Cato, Powell said the Fed accepts its responsibility for price stability, which is 2% inflation over time.  “I can assure you that my colleagues and I are strongly committed to this project and we will keep at it until the job is done,” Powell said.  Powell made clear that investors should be prepared for rates that will stay higher for longer.  “History cautions against prematurely loosening policy,” he said.

International Economic News:  Canada shed jobs for a third straight month in August, a sign higher interest rates may be starting to cool the overheated economy.   Statistics Canada reported the country lost a net 39,700 jobs in August.  Economists had expected a decline of just 15,000.  The decline lifted the jobless rate to 5.4%--up from a low of 4.9% in July.  Following the data release, traders pulled back from bets of a 50-basis point increase at the bank’s next decision in October, now strongly leaning toward 25 bps.   Last month’s job losses were concentrated in construction, with educational services, and wholesale and retail trade falling sharply over the last three months.  Royce Mendes, head of Macro Strategy at Desjardins Group, said, “The deterioration in the job market appears to be occurring faster than anticipated.”

Across the Atlantic, businesses and households in the United Kingdom are warning they won’t make it through the winter without help from the government.  Incoming Prime Minister Liz Truss will have her hands full almost as soon as she comes into office.  For months, the United Kingdom has endured a leadership vacuum while the country has skidded toward a recession and a humanitarian crisis triggered by soaring energy bills.  Since Boris Johnson announced he would leave office in July, the outlook for growth has weakened.  Annual inflation is running above 10% as food and fuel prices surge.  Furthermore, the British pound just logged its worst month since the aftermath of the 2016 Brexit referendum.  The pound sits at its lowest level against the U.S. dollar in more than two years.   “It’s just one blow after the other,” said Martin McTague, who heads up the UK’s Federation of Small Businesses. “I’m afraid I can’t find any good news.”

On Europe’s mainland, France’s national statistics agency, Insee, expects an expansion this quarter, but its latest forecasts suggest stagnation in the following three months.  In August, the central bank’s monthly poll of 8,500 firms showed supply difficulties had eased, reaching their lowest level in a year.  In addition, the number of businesses raising prices has declined.   Based on its analysis of business leaders’ responses, the Bank of France cited overall concerns to be the availability and price of energy, and how households will react to inflation.  The Bank of France stated, “In a very difficult and uncertain economic environment, overall activity continues to resist.”

In Asia, the world’s second-biggest economy is grappling with the impact of a severe drought, a real estate sector suffering from the hangover of running up too much debt, and Beijing’s strict adherence to a rigid zero-Covid policy.  Within the past two weeks, eight megacities have gone into full or partial lockdowns.  Together these vital centers of manufacturing and transport are home to 127 million people.   Nationwide, at least 74 cities had been closed off since late August, affecting more than 313 million residents.   Craig Singleton, senior China fellow at the Foundation for Defense of Democracies, a DC-based think tank stated, “Beijing appears willing to absorb the economic and social costs that stem from its zero-Covid policy because the alternative — widespread infections along with corresponding hospitalizations and deaths — represents an even greater threat to the government’s legitimacy.”

Japanese Prime Minister Fumio Kishida ordered that a fresh stimulus package be put together in October to help the economy weather the impact of inflation.  The government will consider an extra budget to fund the extra stimulus Kishida said, without offering further details.  A previous package announced in April had 6.2 trillion yen ($43.2 billion) in measures to help households and businesses deal with inflation.  Japan’s government unveiled an updated round of price-relief steps that largely extends previous aid while adding cash handouts and grants.   Kishida said low-income households will receive 50,000-yen ($347) handouts to help them cope with higher energy bills and food prices.  Regional governments will get a 600-billion-yen boost in grants to pursue their own inflation measures, the premier added.

Finally:  In October of 1973 the members of the Organization of Arab Petroleum Exporting Countries, led by Saudi Arabia, proclaimed an oil embargo targeted at nations that had supported Israel during the Yom Kippur War.  The embargo led to the price of oil rising nearly 300% in the United States, and the formation of the Strategic Petroleum Reserve (SPR) an emergency stockpile of petroleum maintained by the Department of Energy.   President Biden has authorized the release of much of that capacity to reduce the price of gas at the pump, causing the level to drop (precipitously) to less than 450 million barrels today—its lowest level since 1984.  Critics have questioned whether it’s wise to reduce the stockpile in the midst of rising geopolitical tensions, while others point to recently falling gas prices as proof that the drawdown was necessary – and worked.  (Chart from chartr.co) 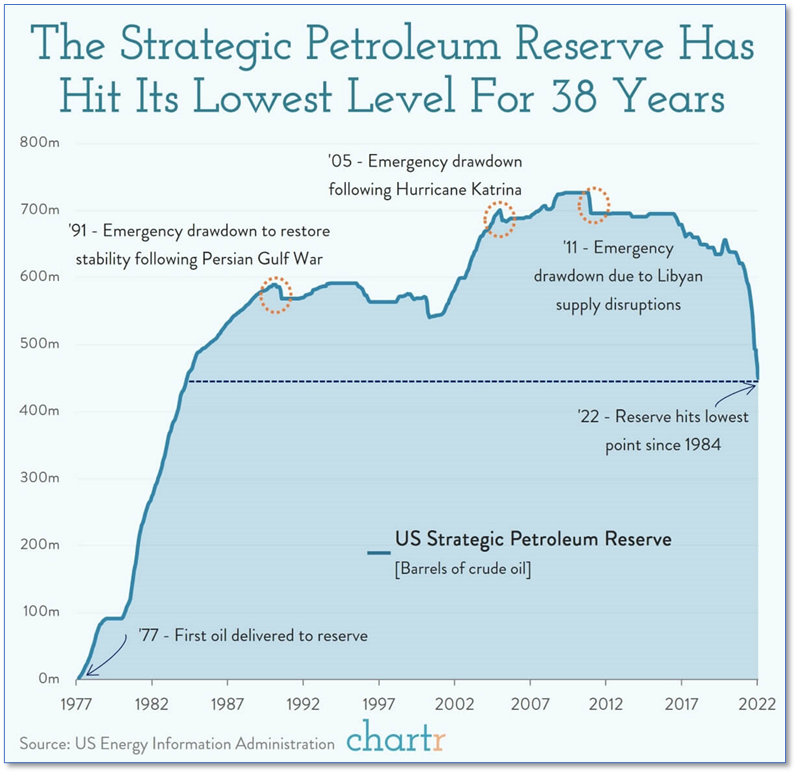