The reversal of the bear market from mid-June to mid-August provided relief for many and hope that the worst was over. However, while the rally was pushing stocks towards positive territory, encouraging an increase in equity exposure, we remained increasingly concerned about the challenging monetary policy and economic backdrop as well as our stubbornly negative market indicators. We remained with the belief the rally was a normal bear market rally, and only made small tactical moves. With the rally failing at key resistance levels, it appears it was, indeed, just a bear market rally, and this bear market has more to play out.

The Fed is trying to “tighten” monetary policy by hiking interest rates and reducing liquidity. The goal is to increase borrowing costs to reduce demand, which should reduce inflation. However, the rising stock markets off their June low in July and early August, served to boost consumer confidence and act to resist the very financial conditions the Fed is trying to create.

This is hardly the environment desired by the Fed to quell inflation. Investors hoping for a return to bullish markets should be aware the Fed is ultimately pushing for lower stock prices.

The Fed is currently removing liquidity by reducing its balance sheet twice as fast as in 2018. For those who don’t remember, the last time this occurred the market plunged 20% over a three-month period. While the Fed is focused on hiking rates and reducing its balance sheet, there is a lag time between these changes to monetary policy and their impact on the economy.

Over the next 6-9 months, the third straight rate hike of 0.75% declared on September 21st should begin to weigh on the economy as further hikes are expected. Higher borrowing costs and prices will ultimately start to force consumers to choose to spend less thereby slowing economic growth.

“We need to act now, forthrightly, strongly as we have been doing. It is very important that inflation expectations remain anchored. What we hope to achieve is a period of growth below trend.”

That last sentence is the most important to investors. Obviously, the Fed has not accomplished its goals. Therefore, earnings will likely slow as the Fed continues its campaign to degrade economic growth. Some stocks still trade at rich valuations and remain elevated beyond long-term growth trends and investors should expect lower future asset prices as earnings decline. The earnings surge in 2021 due to unparalleled monetary injections in the wake of the covid crisis is something the markets have never experienced previously.

The chart above shows quarterly changes in gross domestic product. As shown, the first 2 quarters of this year had negative readings. Expectations for the 3rd quarter have continuously been downgraded and we could see a 3rd consecutive quarter of negative growth in the economy.

We must not overlook the importance of consumer confidence, given the significant contribution of personal consumption expenditures (PCE) to economic growth that occurred unbroken until the pandemic crisis in 2020.

You can see from the chart above, with consumer confidence represented by the blue line, we are at levels below what we saw during the 2008 great recession. The red line represents personal consumption expenditures, which blew above trend after the pandemic crisis and has yet to rollover.

The linkage between confidence, consumption, and economic growth is critical.

At nearly 70% of the GDP calculation, it is not surprising there is a high correlation between consumer confidence, consumption, and GDP growth.

It is essential to note that since 1960, the expansion of personal consumption expenditures (PCE), and subsequently the rise in gross domestic product (GDP), has come from a massive increase in household debt. The red line in the chart below shows the massive increase in household debt over time in conjunction with personal consumption expenditures as a percentage of GDP (blue line).

Given that wages haven’t risen fast enough over the last 20-years to compensate for increased living costs, the rise in household debt is not surprising. But the increase in debt is not due to the consumption of more goods and services, instead, debt gets used to fill the gap between wages and living standards.

A Look at the Market

As the chart below shows, the market rally from June to August failed at the 200-day moving average, represented by the red line. Outside of a brief rally earlier this month, it has been downhill ever since. We remain above the low set in mid-June, but with the break of support near 3900 on the S&P, we believe the odds favor either a test or a break below that low of 3636 on the S&P.

One silver lining is the decline this year has been orderly. We have not seen a “crash” or event that has driven stocks lower in a rapid fashion. It has allowed for multiple opportunities to reduce risk and reposition. We’ve also seen select stocks not be affected by the overall trend of the market, and it has certainly become a stock picker’s market.

Across all our model portfolios we continue to sit on higher amounts of cash, waiting for better opportunities. We believe eventually we’ll get one, but it remains prudent to be patient and let the evidence of a more meaningful bottom unfold. Historically bottoms occur when there is a final capitulation in the market, as investors finally throw in the towel, and we see heavy volume selling. The indicators we follow have not shown this to occur yet.

The chart below illustrates how difficult it continues to be for even conservative investors, as bonds have provided no support to balanced buy-and-hold portfolios. The chart shows the aggregate bond ETF, with a drop of almost 15% over the last year. With interest rates continuing to rise, it continues to drive prices lower on bonds. This shows why we are not buy-and-hold, diversify between stocks and bonds investment managers. Holding higher levels of cash this year with very limited exposure to bonds has helped our portfolios.

Our long-term indicator on the market, as shown below, continues to be negative. While it strengthened with the market rally from June to August, it remained well below the green line that it needs to clear to turn positive. 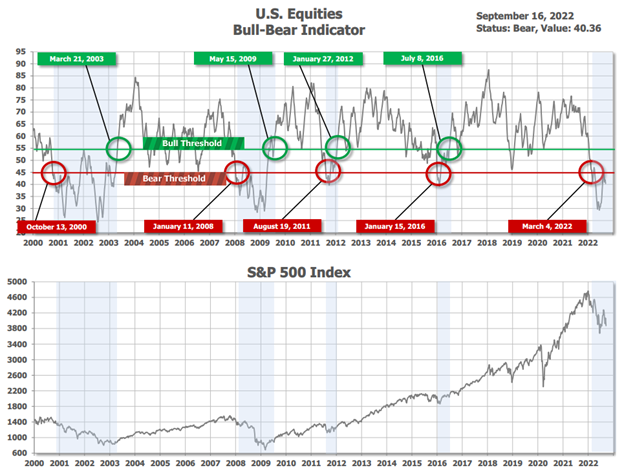 We’ll continue to remain patient with our model portfolios, and let our indicators determine our decision-making. While the picture is ugly currently, we know that bear markets lead to bull markets, and better times are ahead…

The unfortunate loss of Nick Neukirch, ProActive’s CEO and President was a blow to all of us. Nick had handled the business end of the operation as well as oversight of compliance measures. Nick’s kind personality, his devotion to his family, his faith in God, his determined battle with his illness, and his gentle soul will never be forgotten.

Nick’s devotion to the furtherance of ProActive’s unique risk management concepts set the tone and tenor of our business when he acquired it in 2018. As a result of his acquisition, the company was rebranded from Legacy Financial Strategies to ProActive Capital Management to reflect the company’s ongoing devotion to keeping bear market losses relatively small and investment capital expanding during bull markets. This is the hallmark of our competitive advantage and without his dedication, it might have been lost.

It was due to Nick’s wisdom that Cory McPherson was brought into the firm in 2017. Cory quickly became an officer of the corporation, and his investment knowledge and work with our clients earned him the role of portfolio manager and an opportunity to become a co-owner of the firm. Cory subsequently acquired an ownership stake in the corporation in 2021.

Cory’s degree in finance from KSU and his 6+ years of prior experience with Advisors Excel and AE Wealth Management, in addition to his five years of portfolio management experience with ProActive makes him a prize catch for any financial organization. It is with pride that we announce that Cory is the new President and CEO of ProActive Capital Management, and he will soon become sole owner of the firm.

Cory has been well groomed to assume the reigns and ownership of ProActive Capital Management. He has a complete understanding of the company’s concepts and unique risk management methodology, and along with Nick, has been instrumental in their further development.

In Cory, ProActive has gained an energetic leader and a capable investment manager who is fully invested in the company and in the Topeka community, thereby assuring the strength and further development of the organization for years to come.

Cory McPherson is a financial planner and advisor, and President and CEO for ProActive Capital Management, Inc. He is a graduate of Kansas State University with a Bachelor of Science in Business Finance. Cory received his Retirement Income Certified Professional (RICP®) designation from The American College of Financial Services in 2017.

Jim Reardon is a financial planner and advisor, and the Chief Investment Officer for ProActive Capital Management, Inc. He has over 20 years of experience pro-actively managing assets for clients and non-profit organizations. A Certified Financial Planner™, Jim is a graduate of Kansas State University and Washburn University School of Law. He holds licenses in law and securities and was admitted to the Kansas Bar in 1973.

All investments involve risk, including loss of principal invested. Past performance does not guarantee future performance. This commentary is prepared only for clients whose accounts are managed by our tactical management team at PCM. No strategy can guarantee a profit.  All investment strategies involve risk, including the risk of principal loss.