As we wrap up another year, the question we’ve been asked the most over the last month is when will this bear market end and a new bull market begin? As all previous bear markets in history have done, this one will end at some point and lead to a new bull market. We just don’t know when. And of course, since we are not in the predictions business, we will not be making any prediction on when this one ends. What we do believe, based on indicators, is this bear market has longer to play out going into 2023.

Each sustained rally this year has eventually failed at a lower point, and ultimately led to a lower bottom in the market. The recent rally that began in October appears to be fizzling out, as it is showing to be just another bear market rally. With our indicators remaining negative and not giving any long-term buy signal, that leads us to believe this was another bear market rally. There have been 2 different surges in the market in the last few weeks that ultimately were sold off, highlighting the weakness in the market currently. We’ve also seen the market rise above the 200-day moving average (red line in the chart above) for a short amount of time and ultimately fail to hold. If this truly was a bear market rally that has failed, then a re-test of the October lows near 3500 could be in order, followed by a possible lower low in the market sometime early in 2023.

POSSIBILITY OF A FED PIVOT?

The most likely reason for the recent surge in the market, and especially the single day surges on November 30th and December 13th, was the expectation of the Federal Reserve getting close to pausing their interest rate hikes, and eventually pivoting to interest rate cuts. During a speech on November 30th, Fed Chair Jerome Powell said that smaller interest hikes were likely. Investors took that to mean a less restrictive policy going forward and the market exploded higher. Then, on December 13th, inflation numbers for November came in below expectations at a 7.1% annual increase for the consumer price index. The annual rate of inflation has continued to drop each month after peaking at 9.1% in June. After the inflation news came out, the market exploded higher at the open on December 13th, only to be sold off throughout the day.

The next day, the Fed increased rates by 0.50%, bringing the federal funds rate to 4.25%-4.50%, the highest level since 2007. This move was expected by investors, but an increase to projected rates next year by the Fed led to the market selling off. The projected terminal rate for the Fed is now 5.25% next year with no cuts projected. The chart below is an update to a previous newsletter showing the speed with which the Fed has increased rates this year, compared to previous rate hike cycles.

As investors continue to wait for a pause in interest rate increases from the Fed, they may not be happy with the result when that does occur. If the Fed ultimately does stop interest rate hikes earlier than expected, or even begins to decrease rates, then it most likely means the economy is in trouble.

So, what this ultimately means is that using Fed policy as the only indicator for the market may not work so well. When the Fed ultimately does decide to pause interest rate hikes, a strong rally could ultimately ensue. But if the indicators we follow don’t ultimately trigger buy signals, we’ll be hesitant to start adding more risk as it could be just another bear market rally.

As said, what will ultimately lead to the Fed pausing its interest rate hikes will be signs in the economy of a recession taking hold. The economic conditions in this scenario we believe would lead the market lower as we don’t see that lower corporate earnings in a recessionary environment has been priced into the market.

The Conference Board’s Leading Economic Index (LEI) decreased in October by 0.8% and is down 3.2% over a 6-month period from April to October of this year. Ataman Ozyildirim, Senior Director, Economics, at The Conference Board is quoted as saying “The US LEI fell for an eighth consecutive month, suggesting the economy is possibly in a recession. The downturn in the LEI reflects consumers’ worsening outlook amid high inflation and rising interest rates, as well as declining prospects for housing construction and manufacturing. The Conference Board forecasts real GDP growth will be 1.8% year-over-year in 2022, and a recession is likely to start around year end and last through mid-2023.”

The chart below shows the LEI in blue as it has been in a sharp decline. The gray bar shows the year over year change in gross domestic product (GDP). There are ten components that go into this leading economic index. They include things like; manufacturing weekly hours and new orders, building permits, S&P 500 index price, interest rate spreads, consumer expectations, and weekly claims for unemployment. It is meant to find turning points in a business cycle and signal trouble for the economy. 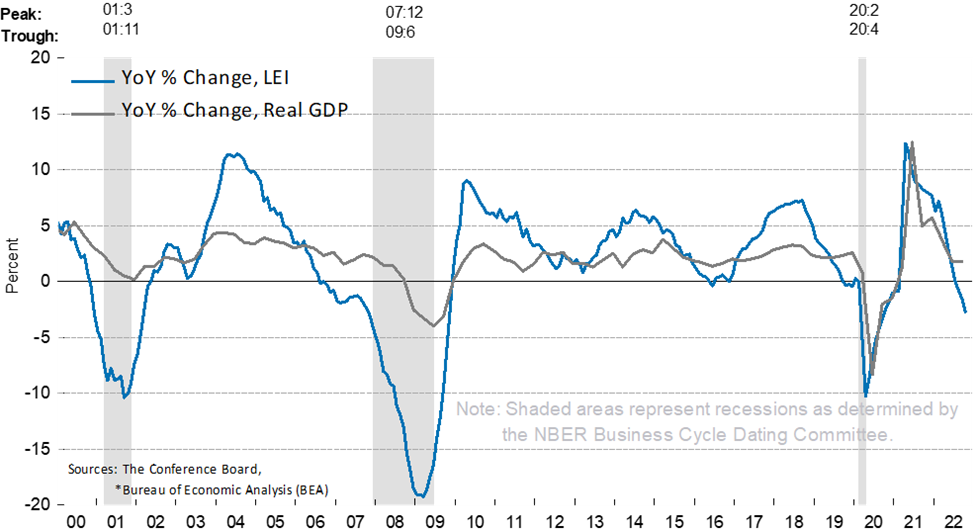 One thing to keep in mind is that a normalization of the yield curve does not give an all clear or positive signal. Recessions historically have ultimately occurred after the yield curve begins to normalize and become positive.

A BETTER OUTLOOK FOR BONDS?

While the Fed has continued to increase their benchmark rate, which has an affect on short-term rates, longer term rates appear to have possibly peaked this cycle. The 30-year treasury rate peaked at 4.4% in late October and is now around 3.6%. The 20-year has dropped from almost 4.6% to 3.8%. Investors appear to be getting more anxious about the economy as they invest in longer-duration Treasury bonds, driving interest rates lower. Interest rates and bond prices have an inverse relationship, so as the rates decline the bond prices appreciate. Most of this year and last year have been dreadful for bond investors as interest rates have climbed, leading to a drop in prices. Historically, when the stock market comes under stress, longer duration Treasuries have served as a hedge. That has certainly not been the case this year, but that could begin to change. 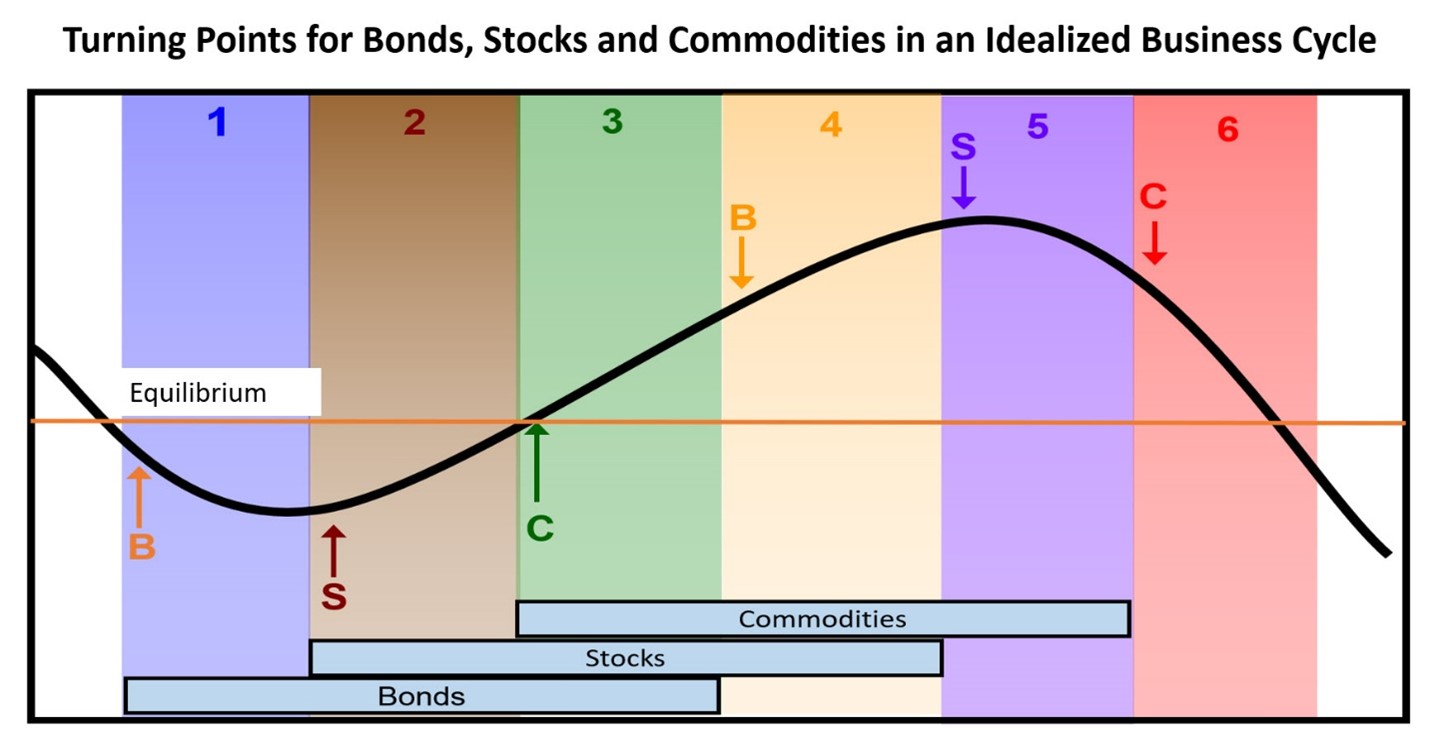 The chart above shows an idealized business cycle in relation to bonds (b), stocks (s), and commodities (c) and when they bottom and top during the cycle. The black line illustrates the business cycle, starting from the left going into contraction, followed by expansion and peaking on the right before starting another period of contraction. You can see in phase 1, as the business cycle enter recession, bonds are the first asset class to bottom and begin to move up, followed by stocks, and then commodities. Later in the cycle, bonds are the first to top and begin moving down, followed by stocks, and then commodities. It appears we could be transitioning from phase 6 on the chart above to phase 1, which would be positive for bonds.

If you look back at the past couple of years, this cycle has played out as it is illustrated above. Bonds peaked first in late 2020/early 2021. Stocks then peaked in late 2021. During this period, commodities were continuing their ascent, but it appears they have peaked as well, declining since the summer.

Now, not every business cycle has played out like this. Each one is different and the tops and bottoms for each asset class can be different. From what we’ve seen the last couple of years, though, points to this cycle playing out as above with bonds being the first to recover as the economy continues to weaken and interest rates begin to fall.

As the Fed continues its inflation fight, the economy continues to weaken. While the Fed may say they have a chance at a “soft landing” of the economy, history tells us the odds of that happening are not great. The economy will really begin to feel the effects of the rapid interest rate hikes early in 2023. We’ll keep an open mind on where this market and economy are headed and be open to any possibility as we react to changing conditions.

While the overall market continues its downtrend, there continue to be small pockets of strength in certain sectors that we’ll continue to have exposure to. But our overall risk levels will remain low until we get confirmation from our long-term buy signals that have remained stubbornly negative this year. We’ll remain patient until we get those signs. It’s important to remember that the stock market will typically bottom when news on the economy and market are the most grim and negative.

Everyone here at ProActive Capital Management wishes you and your family a very Merry Christmas and Happy New Year! We hope you are able to enjoy time with loved ones this holiday season. We will continue to work hard to earn your trust as we head into a new year.

Cory McPherson is a financial planner and advisor, and  President and CEO for ProActive Capital Management, Inc. He is a graduate of Kansas State University with a Bachelor of Science in Business Finance. Cory received his Retirement Income Certified Professional (RICP®) designation from The American College of Financial Services in 2017.

All investments involve risk, including loss of principal invested. Past performance does not guarantee future performance. This commentary is prepared only for clients whose accounts are managed by our tactical management team at PCM. No strategy can guarantee a profit.  All investment strategies involve risk, including the risk of principal loss.