In the markets:   U.S. Markets:  The major U.S. equity indexes ended the week higher, supported by the possibility that the Federal Reserve may slow its pace of interest rate hikes.  Growth stocks outperformed their value counterparts in the S&P 500 Index, while the technology-heavy Nasdaq Composite Index posted solid gains.  The Dow Jones Industrial Average ticked up 0.2% to 34,430 while the NASDAQ rose 2.1% to 11,462.  By market cap, the large cap S&P 500 added 1.1% last week, while the mid cap S&P 400 and small cap Russell 2000 gained 0.6% and 1.3% respectively.

Commodities:  Oil rebounded after three consecutive weeks of declines.  West Texas Intermediate crude oil finished the week up 4.9% to $79.98 per barrel.  Precious metals continued to shine with Gold rising 3.2% to $1809.60 per ounce, while Silver surged 8.5% to $23.25.  The industrial metal copper, viewed by some analysts as a barometer of world economic health due to its wide variety of uses, finished the week up 6.2%.

U.S. Economic News:  The number of Americans filing first-time unemployment benefits retreated last week after jumping the week before.  The Labor Department reported initial jobless claims fell by 16,000 to 225,000 in the week ended November 26.  Economists had expected claims to fall by just 5,000.  The decline reverses a revised gain of 18,000 to 241,000 in the prior week.   Meanwhile, the number of people already collecting benefits, known as ‘continuing claims’, rose by 57,000 to 1.61 million—its highest level since February.   That number is reported with a one-week delay.

The Labor Department reported the U.S. added 263,000 new jobs in November, a historically strong pace of hiring that’s good for workers but also threatens to prolong high inflation.   The unemployment rate remained at 3.7%--close to a 50-year low.  The increase in employment last month was concentrated in hotels, restaurants, and healthcare businesses.  Hiring also rose in construction and manufacturing, two areas of the economy that have been under more duress.  Government employment increased by 42,000.  On a negative note, retail employment shrank for the third month in a row, and warehouse and transportation jobs also declined.  If the economy is slowing, it is not yet evident in the labor market.

Home prices continued to fall for a third consecutive month, according to S&P CoreLogic.  S&P’s Case-Shiller 20-city home price index fell 1.2% in September.  The decline matched forecasts.  Year-over-year home price appreciation is still up 10.4%, but that is predominantly due to the strong housing market at the end of last year.  Since August, the annual rate of home price appreciation has tumbled 13.1%.  On a monthly basis, all 20 cities posted declines led by the western region.   Sales remained strongest in Miami, Tampa and Charlotte.  A broader measure of home prices, the U.S. national index, fell by a seasonally adjusted 0.8% in September.  Most housing analysts don’t expect conditions to improve anytime soon.  Ian Shepherdson, chief economist at Pantheon Macroeconomics wrote in a note, “Prices have much further to fall before they adjust fully to the ongoing collapse in demand.”

October pending home sales, which counts transactions in which a contract has been signed but not yet closed, fell for a fifth consecutive month.  The National Association of Realtors reported pending home sales fell -4.6%, not quite as bad as the -5.5% economists were expecting.  Sales fell in three of the four regions, with the Midwest registering an increase.  From the same time last year, pending home sales were down a sharp 37%.  Sales have stalled as mortgage rates have jumped, making houses less affordable.   Pending home sales give analysts an early indication of future home sales data.

A key measure of inflation rose modestly in October, suggesting that recent red-hot price pressures may be cooling.   The Personal Consumption Expenditures (PCE) index, rumored to be the Federal Reserve’s preferred measure of inflation, slowed to an annualized rate of 6% in October from 6.2% in the prior month.  Furthermore, the PCE’s core index, which strips out the volatile food and energy categories, slipped to 5% from 5.2%.  Core PCE had hit a 40-year high of 5.4% in February.  The rate of inflation appears to be receding, but only very slowly.   Chief North American economist Paul Ashworth of Capital Economics stated, “We expect to see a lot more good news on inflation over the coming months.”

Confidence among the nation’s consumers fell to its lowest level in four months as inflation continued to weigh on spending power and interest rates continued to rise.  The Conference Board reported its index of consumer confidence fell two points to 100.2 in November, closely matching economists’ estimates.  A measure of how consumers feel about the economy right now slipped to 137.4 in November from 138.7 in the prior month. That’s the lowest level in a year and a half.  A similar confidence gauge that looks ahead six months fell to 75.4 to from 77.9 – a six-month low.  As the Federal Reserve continues to raise interest rates to tame inflation, the higher borrowing costs make it more expensive for consumers to spend and invest.  Lynn Franco, senior director of economic indicators at the board stated, “The combination of inflation and interest rate hikes will continue to pose challenges to confidence and economic growth into early 2023.”

According to the latest GDP figures, the U.S. economy grew in the third quarter and is showing little sign of recession—at least yet.  Gross Domestic Product, the official scorecard for the U.S. economy, grew at an annualized 2.9% pace in its final third quarter reading, revised up from its preliminary reading of 2.6%.  GDP had shrunk in the first two quarters of the year.  The main engine of the economy, consumer spending, increased at a solid 1.7% annual clip in the third quarter, the government said.  Previously the increase was put at a softer 1.4%.   However, the largest contribution to growth in the third quarter came from a huge drop in the trade deficit—which accounted for practically all the 2.9% rise in GDP.  The broader economy’s performance was less impressive.  Of note, the Atlanta Federal Reserve’s GDP tracker predicts 4.3% growth in the fourth quarter, but S&P Global sees the economy expanding less than 1%.

U.S. factories face their toughest time since the start of the pandemic, recent data from the Institute for Supply Management (ISM) shows.  ISM reported its Manufacturing index fell to a 30-month low of 49% in November—contracting for the first time since the pandemic.  The last time the index was this low was in May 2020, near the end of a nationwide lockdown in the early stages of the pandemic.  In the details of the report, the index of new orders dropped 2 points to 47.2%.  Orders have been in negative territory in five of the last six months.  In addition, the employment gauge fell 1.6 points to 48.4%, and some companies said they were resorting hiring freezes and even layoffs.  Chief economist Ian Shepherdson of Pantheon Macroeconomics summed up the report, “Manufacturing clearly is struggling in the wake of significantly higher borrowing costs.”

International Economic News:  Canada saw stronger than expected economic growth in the third quarter, but economists warned the underlying data wasn’t as positive as the headline suggested.  Statistics Canada reported the economy grew at an annualized rate of 2.9% in the third quarter.  While the economy experienced stronger than expected growth, economists warned of a slowdown in the fourth quarter.  Of primary concern, household spending fell for the first time since the second quarter of 2021, ticking down -0.3%.   Another sign the economy is slowing is the accumulation of inventories by businesses in the third quarter, despite inventories contributing positively to real gross domestic product.   Statistics Canada said this marked the second consecutive quarter of large inventory accumulation.

Across the Atlantic, a decline in the workforce and shortages in the labor market weighed on potential growth for the United Kingdom from 2020 to 2024, the Organization for Economic Cooperation and Development (OECD) stated.   Former Bank of England governor Michael Saunders expects the UK’s economy will be ranked in the second to lowest group among industrial countries. Saunders stated, “Low potential growth implies low growth in real living standards.”  Saunders expects growth in the UK workforce will subsequently slow from 2010-2019’s average of 0.8% annually to 0% from 2020-2024—among the lowest of any industrial country. According to Saunders, the UK economy will manage an expansion of only 0.5% annually over the next four years.

On Europe’s mainland, France’s credit outlook was downgraded to “negative” from “stable” by S&P Global Ratings as the nation’s slowing economy and government measures to soften the impact of higher energy prices weighed on public finances.  The downgrade comes amid France's already large general government debt, an implementation risk associated with its structural reform agenda, a wider economic slowdown and the European Central Bank's monetary tightening, S&P said in its report.  Ratings agency Moody's, in its most recent rating action, affirmed France's rating at AA2, with a stable outlook.

German exports fell more than expected in October, as high inflation and supply chain snags hit demand in its key trading partners.  Germany’s Federal Statistics Office reported exports declined by 0.6% in October, twice as much as analysts had predicted.  October marked a second consecutive month of falling exports after September saw an unexpected 0.5% drop.  Shipments to Germany's top export partner, the United States, fell the most - down 3.9% in October, while exports to other European Union member states were down 2.4%.  Imports were also much weaker than expected, posting their sharpest drop since January down 3.7%.  "The German export engine is noticeably juddering," said German chambers of commerce and industry (DIHK) trade chief Volker Trier.  "High inflation rates and a tight monetary policy in important sales markets are dampening international demand."

The world’s second-largest economy, China, is forecast to grow at its slowest pace in three decades as China enforces its zero-COVID policy sparking historic protests.  Protests flared up after a fire in an apartment building in the city of Urumqi killed at least 10 people.  Some alleged that lockdowns obstructed the rescue of victims.  Consumer sentiment among the country’s 1.4 billion people has been battered by relentless lockdowns and travel restrictions.  Kristalina Georgieva, the managing director of the IMF, said the outlook for China was “exceptionally uncertain” and “dominated by risks”.

Japan’s factory output fell for a second consecutive month in October, as stalling global demand and lingering supply bottlenecks put a lid on manufacturers’ production plans.  The slowdown in business activity highlights challenges for the world’s third-largest economy, which has been lagging behind its peers in recovering from the pandemic.  At least one analyst doesn’t expect that to improve anytime soon.   Shumpei Fujita, economist at Mitsubishi UFJ Research and Consulting wrote in a note, “The pickup in production is pausing.  For October-December, (Japan’s) production will likely be almost flat or slightly decrease from the previous quarter.”

Finally:  In a speech to the European Parliament this week, European Central Bank President Christine Lagarde stated, “We do not see the components or the direction that would lead me to believe that we’ve reached peak inflation and that it’s going to decline in short order.”  Of the 19 countries that use the euro, the Consumer Price Index (CPI) ex-energy rose to a record 7% in November.  Inflation in the energy component alone was a whopping 34.9% from the same time last year, bringing overall inflation to 10.0% - the second worst reading in the history of the Eurozone.  Some of the Eastern countries in the Eurozone are particularly hard hit by inflation, with several topping 20% year-over-year, like Latvia 21.7%, Estonia 21.4% and Lithuania 21.4%.  And although politicians who seek to escape responsibility frequently scapegoat Russia’s invasion of Ukraine, the truth is that more than half of the Eurozone’s inflation occurred prior to the invasion. A less self-serving analysis might place some blame on the flood of pandemic money-printing by the world’s central banks and deficit-spending stimulus binges by their respective governments.   (Chart from Wolfstreet.com) 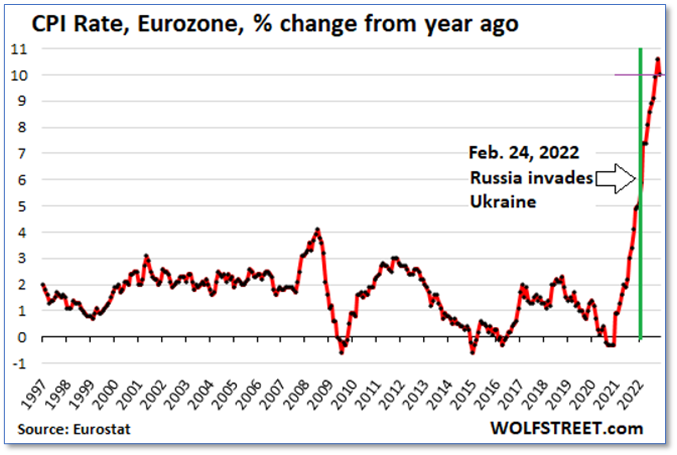