International Markets:  International markets were mixed, but the major developed-market indexes were all green.  Canada’s TSX jumped 2.0%, while the United Kingdom’s FTSE 100 finished up 1.4%.  France’s CAC 40 and Germany’s DAX added 1.0% and 0.8% respectively.  In Asia, China’s Shanghai Composite ticked up 0.1%.   Japan’s Nikkei closed up 1.4%.  As grouped by Morgan Stanley Capital International, developed markets jumped 2.3%, but emerging markets finished the week down -0.7%.

Commodities:  Energy finished the week down for a third consecutive week as West Texas Intermediate crude oil retreated -4.8% to $76.28 per barrel.  Precious metals were mixed with silver rallying 2.1% to $21.43 per ounce, while Gold finished the week essentially flat at $1754.  The industrial metal copper, viewed by some analysts as barometer of world economic health due to its wide variety of uses, ticked down -0.1%.

U.S. Economic News:  The number of Americans filing for first-time unemployment benefits jumped last week to their highest level since last August as recent media reports of layoffs at tech giants may be beginning to take their toll.  The Labor Department reported initial jobless claims rose by 17,000 to 240,000 people in the week ended November 19.  Economists had estimated new claims would rise by just 3,000.  Ian Shepherdson, chief economist at Pantheon Economics noted, “We are increasingly inclined to think that the trend in claims is now rising gently, as firms come under increasing pressure from the Fed’s aggressive tightening.”  Meanwhile, continuing claims, which count the number of people already collecting benefits, rose by 48,000 to 225,000.

Sales of new homes jumped in October despite rising mortgage rates.  The Commerce Department reported new home sales rose 7.5% to a seasonally-adjusted annual rate of 632,000 last month.  Economists had forecast new-home sales to fall to 570,000.  By region, sales surged 45.7% in the Northeast and jumped 16% in the South.   But they plunged -34.2% in the Midwest and ticked down -0.8% in the West.  Meanwhile, the median sales price of a new home jumped to a record $493,000—a 15.4% increase from the same time last year.  The supply of new homes for sale jumped to 8.9 months.  Six months is generally considered a ‘balanced’ housing market.

The U.S. economy is losing speed according to a pair of surveys from Standard & Poor’s.  S&P reported its preliminary, or “flash”, U.S. services sector index dropped to a three-month low of 46.1 this month, while its U.S. manufacturing index slid to a 2 1/2-year low of 47.6.  Readings below 50 reflect a contracting economy.  New orders, a sign of future business activity, fell at their fastest pace since early in the pandemic.  Exports also declined.  One positive note in an otherwise ominous report, the cost of supplies—a measure of inflation, eased again in a sign that intense inflationary pressures are abating.  Companies also raised prices at their slowest pace in more than two years.  Given the reports, more analysts are sounding the alarm that the U.S. economy may be slipping into something more than a mild recession.  Chris Williamson, chief business economist at S&P Global Market Intelligence wrote, “Inflationary pressures should continue to cool in the months ahead, potentially markedly, but the economy meanwhile continues to head deeper into a likely recession.”

Economic growth across the country slowed last month, according to the Federal Reserve Bank of Chicago.  The Chicago Fed’s National Activity Index (CFNAI) decreased to -0.5 in October from 0.17 in September.  The reading suggests economic activity grew slightly below its average historical trend over the month.  The CFNAI, designed to gauge overall economic activity and inflationary pressures, is composed of 85 economic indicators from four broad categories of data: production and income, employment, personal consumption and housing, and sales, orders and inventories.  Three of the four categories made negative contributions in October.  The personal consumption and housing group was the only category that improved last month.

Sentiment among the nation’s consumers fell this month reflecting continued worries about high inflation and the rising odds of a recession.  The University of Michigan reported that its final reading of consumer sentiment retreated 3.1 points to 56.8 in November.  The sub-index that measures how consumers feel about their own financial situation and the current health of the economy came in at 58.8—down 14.8 points from the same time last year.  The measure that asks about expectations for the next six months registered 55.6—also below year-ago levels.  Americans’ view of inflation didn’t change much.  Americans expect the inflation rate in the next year to average about 4.9% before falling to a long-term average of 3%.  Federal Reserve officials pay close attention to inflation expectations because it can be a harbinger of future price trends.

International Economic News:  A new report from the Royal Bank of Canada states that finding a family doctor in Canada is about to get much harder.  According to RBC, the country will be short approximately 44,000 physicians before the end of the decade.  Currently, the number of Canadians who do not have access to a family doctor has already risen to roughly 6 million from 4.6 million in 2019.  The situation is even more dire in rural communities where only 8% of all physicians are serving nearly one-fifth of the country’s population, the report said.  Canada’s supply of doctors has fallen behind its peers in the Organization of Economic Co-operation and Development (OECD), with the number of doctors per capita well behind major economies such as France and Germany.  Canada would need to train or hire 30,000 more physicians by 2028 to match the average number of doctors among its OECD peers, according to the RBC report.

Across the Atlantic, the Organization for Economic Cooperation and Development (OECD) issued a sharp downgrade for the United Kingdom’s economy—which is expected to shrink by 0.4% next year and grow by only 0.2% in 2024.   The OECD wrote inflation exacerbated by worker shortages and “misdirected energy support” will cause the UK economy to contract more than any of the other seven most advanced nations next year.  Germany is the only other G7 country set for a contraction in gross domestic product next year, with a 0.3% drop, the report says.  The OECD also took aim at the UK government’s support efforts to cap energy bills at about £2,500 ($2,955) until April.  “The untargeted energy price guarantee announced in September 2022 by the government will increase pressure on already high inflation in the short term, requiring monetary policy to tighten more and raising debt service costs," it said.

On Europe’s mainland, France and Germany sought to pave over differences in economic policies with their ministers saying they agreed Europe needs a strong response to the U.S. administration’s plans for government support of some domestic industries.  European governments are alarmed that Washington's Inflation Reduction Act (IRA), signed into law by President Joe Biden in August, could put European firms at a disadvantage due to tax breaks it creates for U.S-manufactured goods.   "When we look at the IRA, the status quo is unthinkable, a trade war would be irresponsible," French Economy Minister Bruno Le Maire said following talks with his German counterpart Robert Habeck.  "Europe has to defend its interests as a priority," Le Maire said, adding that the European Union could create a "buy European act" in response.  Habeck said that measures to strengthen European industry should be explored if negotiations with the Biden administration proved fruitless.

In Asia, China reported record-high COVID-19 infections with cities nationwide imposing lockdowns, mass testing, and other curbs that are darkening the outlook for the world’s second-largest economy.  The resurgence of infections, nearly three years after the pandemic emerged in the central city of Wuhan, casts doubt on investor hopes that China could ease its rigid zero-COVID policy soon, despite recent targeted measures.  The curbs are taking a toll on locked-down residents as well as output at factories, including the world's biggest iPhone plant, which has been rocked by clashes between workers and security personnel in a rare show of dissent.  Brokerage Nomura cut its China GDP forecast for the fourth quarter to 2.4% year-over-year from 2.8%, and cut its forecast for full-year growth to 2.8% from 2.9%, which is far short of China's official target of about 5.5% this year.

Japan’s finance chief vowed an all-out effort to fight rising prices as inflation in Tokyo outpaced forecasts and hit its fastest clip since 1982 this week.  Finance Minister Shunichi Suzuki said the government will do all it can to cope with the cost of living crisis to put the economy on a higher growth path, as he sought parliamentary approval for an extra budget to fund an economic package.   After the government submitted the 28.9 trillion yen ($206 billion) budget plan, Suzuki told parliament the economy is facing headwinds from accelerating inflation, driven by surging commodity prices and the yen's sharp decline that has inflated import prices.   But BOJ Governor Haruhiko Kuroda has repeatedly said the central bank's ultralow rate policy should be retained, opposite to the actions of virtually all other developed nations’ central banks, thus ruling out a near-term interest rate hike.

Finally:  As mortgage rates continue to rise and home sales continue to slow, the next leg down of a slowing real estate market has begun—contract cancellations.  The National Association of Home Builders (NAHB) has reported large drops in the traffic of prospective buyers in each of the last eight months.  Of the dwindling number of people that have actually signed a sales contract, many are having second thoughts, followed by buyer’s remorse, followed by canceling the contract.  As the chart below shows, the rate of home purchase cancelations in all major markets save for the Northeast is now a multiple of the cancelation rate of a year ago. (Chart from John Burns Real Estate Consulting, LLC) 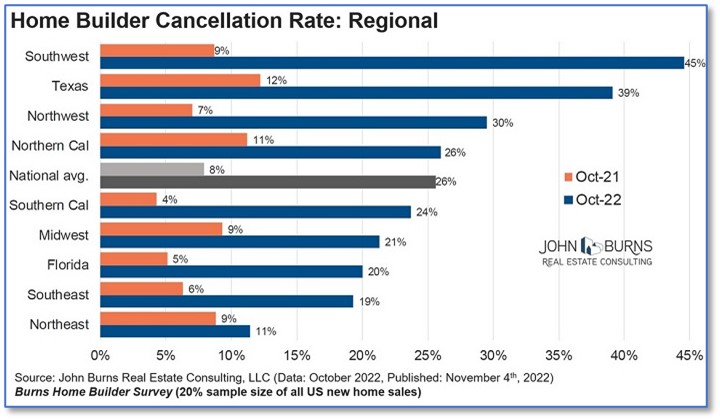