Commodities:  Major commodities finished the week to the downside.  Gold declined -0.7% to $1783.90 per ounce, while silver shed -2.1% to $23.95.  Oil had its first down week in ten.  West Texas Intermediate crude oil declined ‑0.2% to $83.57 per barrel.  The industrial metal copper, viewed by some analysts as a barometer of world economic health due to its wide variety of uses, finished the week down -2.9%.

U.S. Economic News:  The number of Americans filing for first-time unemployment benefits fell to a new pandemic low as companies continue to work with the employees they have and seek to hire more.  The Labor Department reported new jobless claims fell to 281,000 last week—the lowest since March of last year and better than economists’ estimates.  Economists had predicted new claims would total 289,000.  Companies continue to report difficulty finding qualified workers for open positions.  For a variety of reasons, more than 3 million workers have left the workforce during the coronavirus pandemic.  Continuing claims, which counts the number of Americans already receiving benefits, also fell sharply.  That number fell to 2.243 million from 2.480 million—also the lowest since March.

The rate of increase in home prices growth slowed in August.  S&P CoreLogic reported its Case-Shiller Home Price index showed home prices increased 19.8% from a year ago in August, roughly in line with the previous month’s reading.  The separate 20-city index, which measures home prices among a group of major metropolitan areas, notched a similar 19.7% annual gain, down slightly from the previous month.  Craig J. Lazzara, managing director and global head of index investment strategy at S&P DJI, wrote in the report, “Every one of our city and composite indices stands at its all-time high, and year-over-year price growth continues to be very strong, although moderating somewhat from last month’s levels.”   Phoenix and San Diego remained the top two cities with the largest annual gains, up 33.3% and 26.2% respectively.

Sales of new homes soared last month as did the prices paid for them according to the latest data from the Census Bureau.  New home sales increased 14% to an annual rate of 800,000 in September, exceeding the median forecast of 760,000.  Most notably, the median sales price of a new home was $408,800—a record high for new home sales.  By region, the Northeast saw the largest percentage gain in new-home sales, while the Midwest was the only region to record a decrease.  The housing market is entering a more “balanced” period as there is currently a 5.7-month supply of new homes on the market.   Six months of supply is generally considered a “balanced” housing market.

The confidence of American consumers improved this month, following three straight months of declines.  The Conference Board stated its index of consumer confidence rose to 113.8 in October, up 4 points from the prior month.   Economists had expected a decline to 108.  Consumer confidence has waned since the index hit 128.9 in June, presumably due to the rising prices faced by shoppers.  In the details, the part of the survey that tracks how consumers feel about current economic conditions rose to 147.4 this month from 144.3 in September.  The index tracking what Americans expect over the next six months rose to 91.3 from 86.7.  A short-term gauge of inflation concerns rose to a 13-year high.

Orders for goods expected to last at least three years, so-called ‘durable goods’, declined last month pulled down by few orders for new vehicles and airplanes.  The Commerce Department reported U.S. durable-goods orders fell 0.4% in September, after a 1.3% rise in the prior month.  Economists had expected a 1% decline.  This was the first decline in five months.  Excluding transportation, orders increased 0.4%, matching expectations.  Transportation equipment drove the decline last month—down 2.3%, a reflection of the supply problems in the auto market.  However, analysts remained optimistic that this wasn’t a bad report.   Michael Pearce, senior U.S. economist at Capital Economics wrote in a note to clients, “The strong increase in underlying orders and shipments suggests that demand remains rock solid."

Consumers dipped into their savings to keep the good times rolling in September according to the Commerce Department.  Consumer spending rose 0.6% in September (in-line with forecasts) while personal income slumped ‑1% following a 0.2% gain the prior month.  The result was that the personal savings rate fell to 7.5% from 9.2%--slightly below its pre-pandemic level.  The 12-month increase in the Personal Consumption Expenditures Index (the Federal Reserve’s preferred inflation gauge) rose to 4.4% in September, up 0.2% from the prior month.  That’s well above the Fed’s 2% annual target rate.  The core PCE, which strips out food and energy, held steady at 3.6% on an annual basis.

International Economic News:  Bank of Canada Governor Tiff Macklem told reporters that interest rates could be hiked as soon as April 2022 and said inflation would stay above target through much of next year.  As expected, the central bank held its key overnight interest rate at 0.25% and announced it was ending its bond-buying program citing the nation’s robust economic growth.  “We now expect slack to be absorbed sooner, and that signals that we will be considering raising interest rates sooner than we previously thought," Macklem said.   The Bank had previously forecast a full recovery would happen sometime in the second half of 2022 and that it would keep rates at current levels until that happened.  "It's a bit of a hawkish surprise," said Andrew Kelvin, chief Canada strategist at TD Securities.

Across the Atlantic, economists in Britain are worried about a new trend in the UK economy—sluggish exports.  Britain’s export performance is slipping behind other developed countries as the world recovers from the coronavirus pandemic.  In the three months to August, exports of UK goods were down 13% compared with the same period in 2019, while services were down 14%.  Jonathan Portes, professor of economics at King’s College London, said UK export performance “has really been quite poor” compared with peer countries and relative to the wider UK economy, which has nearly recovered to pre-pandemic levels.  “This is possibly the single most worrying thing about post-Brexit, post-pandemic developments in the UK economy…because it’s UK specific,” he added.

On Europe’s mainland, France announced that it will bar British fishing boats from some French ports starting next week if no deal is reached with the United Kingdom in a dispute over fishing licenses.  French authorities fined two British fishing vessels and kept one in port overnight after the U.K. and the Channel Island of Jersey refused dozens of French fishing boats a license to operate in their territorial waters.   Jersey, which is only 14 miles off the French coast, is a British Crown dependency.  Since the U.K. left the economic orbit of the European Union at the start of the year, relations between London and Paris have become increasingly frayed.

The German government has cut its economic growth forecast for this year to 2.6%, but lifted its estimate for next year to 4.1% as supply problems are delaying the recovery in Europe's largest economy.  The revised government forecast for gross domestic product growth compares with an April prediction for the economy to grow by 3.5% in 2021 and by 3.6% in 2022.   For 2023, the government now expects economic growth to normalize with an expansion rate of 1.6%.  Analysts state the scarcity of semiconductors and other intermediate goods, as well as raw materials, is holding back German manufacturing output.

In Asia, senior analyst for China at Autonomous Research Charlene Chu stated the risk of ‘stagflation’ (rising inflation in a stagnant economy) is “very real” in China over the next couple of quarters.  China’s producer price index jumped 10.7% last month compared with the same time a year earlier—the fastest pace since 1996 when the data started.  At the same time, power cuts across the country have prompted several analysts to slash their GDP forecasts.  Chu stated this combination of factors has made it difficult for Chinese authorities to stimulate the economy in a big way.  In addition to the power crunch that has hurt factory production, a slowdown in the real estate sector has also dampened growth forecasts.

The Japanese yen’s recent slide to a three-year low against the U.S. dollar has Japan’s citizens worried it could hurt businesses and consumer sentiment by making things even more expensive.  But Bank of Japan Governor Kuroda dismissed those concerns saying a weak yen does more good than harm.  Kuroda noted the positives of a weaker yen, which boosts the value of overseas corporate earnings when converted into the Japanese currency. "The positive impact substantially outweighs the negative," he said. "The current yen weakness is positive for the economy, without a doubt."  Kuroda, a former currency diplomat at the Ministry of Finance, described the current yen-dollar rate as undervalued, but only slightly.

Finally:  Shares of Tesla surged over 22% this week, pushing the company’s market capitalization to over $1.01 trillion.  Tesla now has a price-to-earnings (P/E) ratio of over 330 in an industry where P/E ratios of 10 to 30 are typical.  With its current market cap, Tesla is now worth as much as the next 10 most valuable global automakers combined, as this chart from wolfstreet.com illustrates.   Ridiculous, or prescient?  Time will tell. 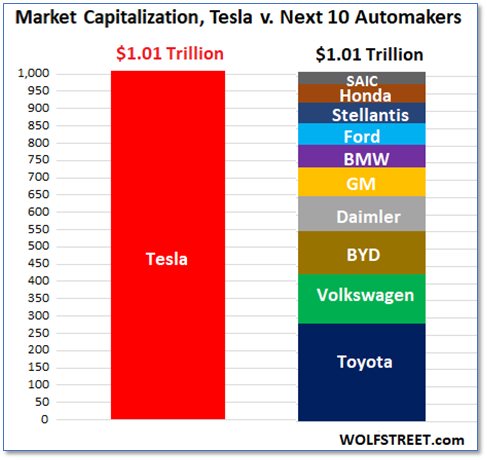