In the markets:   U.S. Markets:  Most of the major U.S. indexes gave back a portion of last week’s strong gains and closed modestly lower.  Growth stocks lagged value-oriented shares and the energy sector underperformed as European oil and natural gas inventories reached near-peak levels.  The Dow Jones Industrial Average closed the week flat at 33,746.  The technology-heavy NASDAQ Composite retraced -1.6% finishing the week at 11,146.  By market cap, the large cap S&P 500 retreated -0.7%, while the mid cap S&P 400 declined -0.8% and the small cap Russell 2000 fared the worst ending the week down -1.8%.

Commodities:  Major commodities finished the week predominantly in the red.   Gold pulled back -0.9% to $1754.40 per ounce, while Silver retreated -3.1% to $21.00.  West Texas Intermediate crude plunged -10% to $80.11 per barrel.   The industrial metal copper, viewed by some analysts as a barometer of world economic health due to its wide variety of uses, ended the week down -7.2%.

U.S. Economic News:  The number of Americans filing for first-time unemployment benefits pulled back last week, but media reports of layoffs are starting to rise.  The Labor Department reported 222,000 people applied for unemployment benefits last week, slightly below the consensus forecast of 225,000.  However, recent headlines, especially from large technology companies, show layoffs appear to be on the rise.  The only state to report a big increase in jobless claims was Minnesota.   Kentucky showed the biggest decline.   Most other states were little changed.   Meanwhile, the number of people already collecting benefits rose by 13,000 to 1.5 million.  That number is reported with a one-week delay.

Sentiment among the nation’s homebuilders continued to sour this month as their confidence index fell to its lowest level since the pandemic.  The National Association of Homebuilders reported its monthly confidence index fell 5 points to 33 this month.  It was its eleventh consecutive month of declines.  Outside of the pandemic, the November reading is at its lowest level since June 2012.  All three gauges that make up the headline index fell.   Current sales conditions fell 6 points to 39, while sales expectations dropped 4 points to 31.  The gauge that measures prospective buyer traffic declined 5 points to just 20.  The Federal Reserve’s aggressive interest rate hikes have made home ownership much less affordable with rates on 30-year mortgages now hovering near 7%.

As expected, actual construction of new houses pulled back last month as high mortgage rates put off buyers and forced builders to scale back.  The Census Bureau reported housing starts fell by 4.2% to an annual pace of 1.43 million last month, down from 1.49 million in September.  Economists had expected housing starts to come in at 1.41 million.  Meanwhile, building permits - a sign of future building activity - slipped 2.4% to a rate of 1.53 million, down from a record 1.9 million last December.   Single-family home construction fell 6.1% to an annual rate of 855,000 in October.  Projects with five units or more registered a 556,000 rate, little changed from the prior month.   Housing starts are down 9% from a year ago, when mortgage rates briefly dipped below 3%.  Permits have fallen 10% from a year earlier.

Prices at the wholesale-level ticked up last month but not nearly as much as expected, the Labor Department reported.  The Producer Price index ticked up 0.2% in October, a fourth consecutive soft reading, suggesting inflation may be slowing after hitting a 40-year high earlier this year.   Economists had forecast a 0.4% gain.   On an annual basis, wholesale prices slowed to 8% from 8.4% after peaking at 11.7% in March.  Meanwhile, a separate measure of wholesale prices that strips out the often-volatile food and energy categories, so-called “core” prices, also rose 0.2% last month.   On an annual basis, that number also pulled back 0.2% to 5.4%.  The cooler inflation data was welcome news to analysts as well.  Rubeela Farooqi, chief economist at High Frequency Economics remarked, “The improvement in the October inflation data, if it persists, supports the Fed’s expectation of a step down in the pace of [interest-rate] increases going forward.”

Factory activity in the New York-area edged higher this month, its first positive reading since July.  The New York Federal Reserve reported its Empire State business conditions index, a gauge of manufacturing activity, rose 13.6 points to 4.5 in November.  The reading exceeded economists’ forecasts of just a slight improvement to -6.  In the details, the index for new orders dropped 7 points to -3.3, while the shipments index jumped 8.3 points to 8.  However, firms were more pessimistic about the future.  The index for future business conditions fell 4 points to -6.1.

Sales at the nation’s retailers jumped last month, a sign that despite a difficult year in the equities markets consumers remain resilient.  The government reported sales jumped 1.3% in October, slightly exceeding the consensus forecast of 1.2%.  It was the biggest increase in eight months.  Excluding auto dealers and gas stations, receipts were still up 0.9%.   Retail sales are a big part of consumer spending and offer clues on the strength of the economy.  Sales rose in almost every major retail segment in October.   Paul Ashworth, chief North American economist at Capital Economics stated that if the U.S. consumer keeps spending, an economic downturn should remain mild.  Ashworth wrote in a note, “We still think the economy will slide into a mild recession in the first half of next year, but much more of this from the U.S. consumer, and we might be in for a soft landing after all.”

The Conference Board stated a recession in the U.S. is imminent as its Leading Economic Index (LEI) for the U.S. fell 0.8% last month to 114.9.  That reading follows a 0.5% decline in September.  The LEI is now down 3.2% over the six-month period between April and October, reversing the previous six months’ 0.5% growth.  Ataman Ozyildirim, Senior Director of economics at the Conference Board stated, “The US LEI fell for an eighth consecutive month, suggesting the economy is possibly in a recession.  The downturn in the LEI reflects consumers’ worsening outlook amid high inflation and rising interest rates, as well as declining prospects for housing construction and manufacturing.   The Conference Board forecasts real GDP growth will be 1.8 percent year-over-year in 2022, and a recession is likely to start around year-end and last through mid-2023.”

International Economic News:  Bank of Canada Governor Tiff Macklem said lower-income Canadians will be disproportionately affected by the slowdown in economic activity that is needed to ease inflationary pressures.  "Slowing economic growth will disproportionately affect our most vulnerable households," he said.  "High inflation and high interest rates to combat inflation put an additional burden on our lowest-income households."  Macklem made the comments in his opening remarks at the fourth annual Conference on Diversity, Equity and Inclusion in Economics, Finance and Central Banking.  Macklem also reiterated that inflation is too high and challenges remain as the central bank works to lower it.  The Bank of Canada has hiked its policy rate by 350 basis points since March to 3.75%, in one of its sharpest tightening campaigns ever.  Last month it forecast the Canadian economy would stall through the first half of 2023.

Across the Atlantic, the United Kingdom’s Finance Minister Jeremy Hunt stated the U.K. has already slipped into recession.  The last time the U.K. was in recession was during the 2008 financial crisis.  Hunt, the Chancellor of the Exchequer and the second-highest ranking member of Britain's government behind Prime Minister Rishi Sunak, made the declaration to lawmakers gathered in the House of Commons.  Hunt blamed the country’s economic woes primarily on the war in Ukraine and supply chain disruptions.   "There is a global energy crisis, a global inflation crisis and a global economic crisis.  But today with this plan for stability, growth and public services, we will face into the storm," said Hunt.

On Europe’s mainland, according to French firm Ecole de Guerre Economique research, French people view the U.S. as their biggest enemy and also the biggest hindrance to their economic prosperity—not Russia.  EGE noted western media outlets have done their best to paint Russia as the “barbaric villain’ in front of people across the globe, but “the truth can’t be hidden for long”.  It’s not Russia, but the USA that is being seen as the biggest enemy of the world, the report stated.  Many of the sanctions against Russia that were pushed by the United States have had particularly disastrous effects on European nations, especially with regards to energy.  But those sanctions have not had the intended impact on Russia--and the U.S. hasn’t been harmed either.

The ZEW economic research institute reported German investor sentiment improved more than expected in November on hopes that the rate of inflation will slow soon.  ZEW stated its economic sentiment index rose for the second month in a row to -36.7 from -59.2 the month before.  Economists had expected a reading of -50.  ZEW President Achim Wambach remarked, “This is likely to be related above all to the hope that inflation rates will fall soon.  However, the economic outlook for the German economy is still clearly negative," he added.  The European Central Bank has increased rates at its fastest pace ever, hiking them by a combined 200 basis points to 1.5% in just three months in an effort to tame record high Eurozone inflation.

In Asia, market sentiment on Chinese stocks hit rock bottom just a few weeks ago after Chinese President Xi Jinping secured a third term in power and stacked his ruling party with loyalists.  However, this past week, a series of unexpected steps by Beijing including the easing of draconian zero-COVID restrictions, moves to support its property sector and Xi’s return to the world stage have triggered a huge rally.   Hong Kong’s Hang Seng has surged almost 20%, while China’s Shanghai Composite has added 7%.  Stephen Innes, managing partner for SPI Asset Management stated, “China continued to see a barrage of upside activity…as reopening measures are a clear buy signal.  We are in a sea change after China’s more progressive policy evolution arrived unexpectedly.”

Japan’s economy unexpectedly shrank for the first time in a year in the third quarter, stoking further fears of a global recession.  The world’s third biggest economy has struggled as global inflation, a weak yen, and sweeping interest rate increases worldwide have weighed on Japan’s consumers and businesses.  Gross domestic product fell an annualized 1.2% in July-September, official data showed.  Economists’ had expected a 1.1% expansion.  On top of being squeezed by a global slowdown and soaring inflation, Japan’s currency--the yen--slid to 32-year lows against the dollar.  Despite the poor reading, Atsushi Takeda, chief economist at Itochu Economic Research Institute, remained optimistic writing, “The three key pillars of demand - consumption, capital expenditure and exports - remained in positive territory.”

Finally:  One of the hallmarks of a recession is a rise in consumer credit defaults, inevitably resulting in a rise in 3rd-party collection activity.  That has not happened yet – in fact, quite the opposite.  3rd-party collection activity is at a record low of 5.7% of consumers – well less than half the 14.6% level seen in 2008’s recession.   Despite record high credit card balances being carried by consumers, the rate of default is surprisingly low.   (Chart from Wolfstreet.com) 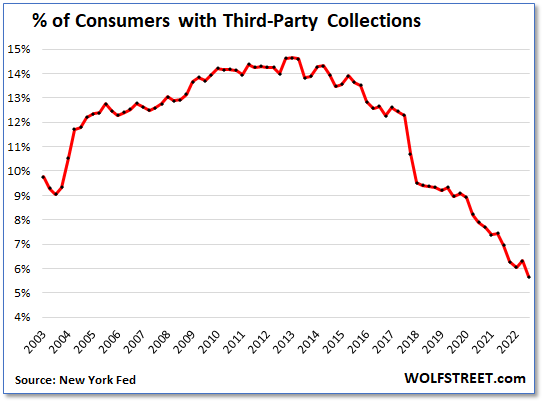