Commodities:  Precious metals managed to finish the week in the green.  Gold rose 0.99% to $1672.00 per ounce, while Silver added 0.68% to $19.04.  West Texas Intermediate crude rebounded slightly this week as well, rising 0.95% to $79.49 per barrel.  The industrial metal copper, viewed by some analysts as a barometer of world economic health due to its wide variety of uses, gained 2.1%.

U.S. Economic News:  The number of Americans filing for first-time unemployment benefits fell to its lowest level in five months last week, a sign the labor market remains robust.  The Labor Department reported initial jobless claims fell by 16,000 to 193,000 in the week ended September 24th.  That’s the lowest level of claims since late April.  Economists had expected claims to rise by 2,000.  Analysts note recent rate hikes by the Federal Reserve are not yet cooling the economy.  In fact, the media continues to report more stories about shortages of skilled workers than layoffs.  Ian Shepherdson, chief economist at Pantheon Macroeconomics, wrote in a note to clients, “With labor still very hard to find, firms probably are holding on to people who under normal conditions would have been laid off.  At this point, then, the softening of the labor market which the Fed wants appears unlikely to come via rising layoffs.”

Home prices across the country pulled back in July as mortgage rates approach levels not seen since 2007.  S&P CoreLogic reported its 20-city home price index fell a seasonally-adjusted -0.4% in July, down from a 0.4% rise in June.  The decline slowed the annual rate of increase to 16.1%, down from 18.7% in the previous month.  The rate of rise has slowed sharply since reaching a peak of 21.2% in April.  All 20 cities comprising the 20-city index reported lower home  year-over-year prices.  Tampa, Miami, and Dallas reported the highest year-over-year gains among the 20 cities in July.  Price growth was strongest in the South and Southeast—up over 26% over the past year.   San Francisco, Seattle, and San Diego reported the steepest fall in home prices.  Craig J. Lazzara, managing director at S&P DJI, summed up the report succinctly, “July’s report reflects a forceful deceleration.”  Stephen Stanley, chief economist at Amherst Pierpont, wrote in a note ”The cooling has come fast and hard.  Cities in the West posted the steepest increases during the pandemic, and they are reversing hard now.”

Economic growth slowed in August, according to data from the Federal Reserve Bank of Chicago, adding to signs of an impending recession.   The Chicago Fed’s National Activity index (CFNAI) monthly decline in August was driven by weakness in production-related indicators, whose losses offset gains by the index’s other components.   The CFNAI, designed to gauge overall economic activity and inflationary pressures on a nationwide level, is composed of 85 economic indicators from four broad categories of data: production and income; employment, unemployment and hours; personal consumption and housing; and sales, orders and inventories.

Inflation in August was stronger than expected despite the Federal Reserve’s efforts to bring down prices.  The Personal Consumption Expenditures (PCE) index, rumored to the be the Federal Reserve’s preferred measure of inflation over the CPI, rose 0.3% in August, up from a -0.1% decline in July.  Excluding food and energy, so-called “core” PCE rose 0.6% for the month.   On an annual basis, core PCE increased 4.9%--more than the 4.7% consensus forecast and up 0.2% from the previous month.  The Fed generally favors core PCE as the broadest indicator of where prices are heading as it adjusts for consumer behavior.  Regardless of which metric is chosen, CPI or PCE, the data shows inflation running well above the central bank’s 2% long-run target.

Orders for goods expected to last at least three years, so-called ‘durable goods’, pulled back slightly in August because of lower demand for large aircraft, but investment rose in a sign the economy is still plowing ahead.  The Census Bureau reported orders for durable goods fell -0.2% in August, less than the -0.5% decline economists had expected.  More importantly, analysts note, ‘core orders’ jumped 1.3% last month showing surprising strength.  Core orders exclude big-ticket items like military spending, auto manufacturing, and airplane manufacturing that can skew the report wildly one way or the other.   Analysts look to core orders for a more reliable sign of demand in the broader economy.  Senior U.S. economist Andrew Hunter of Capital Economics stated the drop in orders “wasn’t as bad as we expected and suggests that business equipment investment is, for now at least, still holding up in the face of surging interest rates.”

Confidence among the nation’s consumers hit a five-month high this month, predominantly due to the fall in gas prices.  The Conference Board reported its index of U.S. Consumer Confidence rose 4.4 points to 108 in September.  Economists had expected a reading of 104.5.  Falling gas prices eased the anxieties of Americans feeling the pain of high inflation, but now rising interest rates are increasing the borrowing costs for houses, cars, and just about everything else.  In the details, a measure of how consumers feel about the economy right now rose 4.3 points to 149.6 in September, while a similar gauge that looks ahead six months climbed to 80.3 from 75.8—the highest level in seven months.

International Economic News:  Canada’s economy grew in July, bucking expectations of an imminent decline.  Statistics Canada reported Canada’s gross domestic product expanded by 0.1% in July, as growth in mining, agriculture and the oil and gas sector offset weakness in manufacturing.  While the economy eked out slight growth in July, the data agency's early look at August's numbers shows no growth.  Economist Royce Mendes with Desjardins wrote in a note, “The economy fared better than anticipated this summer, but the showing still wasn't much to write home about.”  Still, the performance of Canada's economy throughout the fiscal year — 3.6 per cent growth in Q1 and 4.2 per cent thus far in Q2 — remains one of the best in the world.

Across the Atlantic, the Bank of England took emergency action this week to stabilize its financial markets and head off a crisis in its broader economy.  The central bank warned that crumbling confidence in the economy posed a “material risk to U.K. financial stability” and announced it would buy long-term government bonds over the next two weeks to combat a recent slide in British financial assets.  “Were dysfunction in this market to continue or worsen, there would be a material risk to U.K. financial stability, ″ the bank said in a statement.  “This would lead to an unwarranted tightening of financing conditions and a reduction of the flow of credit to the real economy.″   The British pound plunged to a record low against the U.S. dollar following the government’s announcement, and yields on U.K. government debt soared.

On Europe’s mainland, France’s finance minister said the fight against inflation is his biggest priority as he delivered the 2023 budget.  "The most important and most urgent challenge for France and other European nations is to bring down the inflation pressure," Finance Minister Bruno Le Maire said.  The ministry said it had budgeted 45 billion euros ($43.6 billion) next year to cap increases in gas and power prices at 15%.  Le Maire said that "uncertainty has never been greater" about the economic outlook for next year as the war in Ukraine continues to rage and Russia's moves remained unpredictable.  The Finance Ministry forecast earlier this month that the economy would grow 2.7% this year before slowing to 1% next year, while the central bank expects 0.8% next year at most.

Europe’s main economic powerhouse, Germany, just reported its highest inflation in 70 years as economists warn of the risk of a deep recession.   German inflation soared to 10.9% in September, accelerating from 8.8% in August.  It was the first time German inflation has reached double-digits since 1951.  The increase is expected to lift overall Eurozone inflation to a new record of 9.7%.  Chancellor Olaf Scholz responded to soaring energy costs this week by announcing a 200 billion euro cap on gas prices, which he described as a “defensive shield” to be financed by extending an off-balance sheet fund set up to provide aid during the coronavirus pandemic.  “Inflation is running red hot in Germany,” said Carsten Brzeski, an economist at Dutch bank ING, adding that it was “hard to see” how the European Central Bank could not raise interest rates by 0.75 percentage points for a third consecutive time at next month’s meeting.

In Asia, for the first time in more than 30 years, China’s economic growth has been put behind the rest of the Asia-Pacific region in World Bank forecasts.  In its biannual report, the World Bank said the annual growth outlook for East Asia and the Pacific region had been downgraded from 5% to 3.2%.  However, much of that decline was due to economic problems in China, which constitutes 86% of the region’s economic output.  The World Bank forecast GDP growth in China – the world’s second largest economy – of just 2.8% for 2022, while the rest of the 23-country region is expected to grow an average of 5.3%, more than double 2021’s 2.6% rise.  The forecast for China puts its GDP growth behind its neighbors for the first time since 1990.

Japanese Finance Minister Shunichi Suzuki said authorities stood ready to respond to speculative currency moves, a warning that comes days after Tokyo intervened in the foreign exchange market for the first time in more than two decades to stem a fall in the yen.  Suzuki also stated Japan’s government and the Bank of Japan were on the same page sharing concerns about the currency’s sharp declines.  "We are deeply concerned about recent rapid and one-sided market moves driven in part by speculative trading," Suzuki said.  "There's no change to our stance of being ready to respond as needed" to such moves, he added.  Analysts state Japan likely spent a record around 3.6 trillion yen ($25 billion) last week in its first dollar-selling, yen-buying intervention in 24 years to stem the currency's sharp weakening.

Finally:  NFT’s, which stands for “non-fungible tokens”, are cryptographic digital assets that exist on a blockchain with unique identification codes and metadata that distinguish each from all others.  Unlike cryptocurrencies, like Bitcoin, that are identical and, therefore, can serve as a medium for transactions, NFTs are unique and intended to represent some real-world asset like a work of art, music, photos, etc.  NFTs have been made to represent things as widely varied as NBA “Top Shot” photos and Twitter founder Jack Dorsey’s very first tweet ever, in which he wrote: “just setting up my twttr.”  At one time in the not too distant past, NFTs were touted as being “the next big thing”.   Recently, however, trading in NFTs has absolutely plummeted—now down 97% from the peak in January of this year.  The fading NFT mania is part of a wider, $2 trillion wipeout in the crypto sector overall as rapidly tightening monetary policy starves speculative assets of investment flows. (Chart from Bloomberg.com) 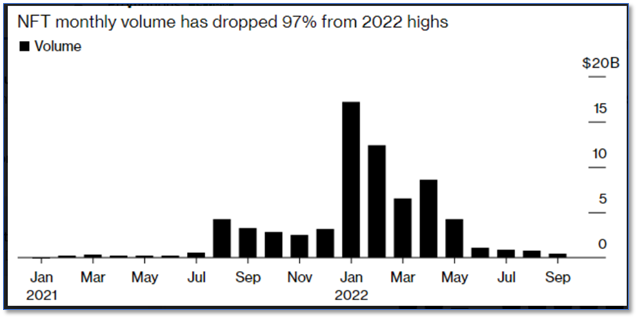