In the markets:   U.S. Markets:  Stocks ended higher for the first time in four weeks but surrendered most of their gains at the end of the week, when employment data suggested that the economy was not slowing enough to satisfy Federal Reserve policymakers.  Energy was the standout performer in the S&P 500 Index as oil prices surged following a decision by major exporters to cut global production.  The Dow Jones Industrial Average retraced most of last week’s decline rising 2.0% to 29,297, but the technology-heavy NASDAQ Composite only managed a 0.7% gain to 10,652.  By market cap, the large cap S&P 500 added 1.5%, while the mid cap S&P 400 and small cap Russell 2000 rose 2.9% and 2.2%, respectively.

Commodities:  Commodities were mostly higher for the week.  Precious metals rose: gold rose 2.2% to $1709.30 per ounce, while silver rallied 6.4% to $20.25.  Oil surged on rumors of a Fed pivot and OPEC production cut.  West Texas Intermediate crude jumped 16.5%, while Brent crude gained 15.4%.  The industrial metal copper, viewed by some analysts as a barometer of world economic health due to its wide variety of uses, finished the week down -0.8%.

U.S. Economic News:  The number of Americans filing first-time unemployment benefits jumped by almost 30,000 last week, a sign of rising layoffs as the economy slows and businesses scale back employment.  The Labor Department reported initial jobless claims hit a five-week high of 219,000 last week.  Economists had forecast new claims would total just 203,000.  Of the 53 states and U.S. territories that report jobless claims, 30 showed an increase and 23 recorded a decline.  Meanwhile, the number of people already collecting unemployment, known as ‘continuing claims’, rose by 15,000 to 1.36 million.  That number remains near a 50-year low.

The U.S. added just 263,000 new jobs last month, the smallest gain in over a year and a half, the government reported.   The weaker reading was attributed to shortages of qualified labor and waning demand for workers as the economy slows.   While the reading was strong historically, it was the weakest since April of 2021.  It also fell short of Wall Street forecasts.  Economists had forecast 275,000 new jobs to be created.   In the details, hotels, restaurants and other companies in the hospitality business created 83,000 new jobs, reflecting strong demand for services such as travel and recreation.   Hiring also rose sharply in health care and professional businesses.  Manufacturers also added 22,000 jobs and construction firms hired 19,000 people.   Employment fell slightly in finance, transportation and government.  The unemployment rate dropped from 3.7% to 3.5%--that puts it back at a pre-pandemic low and marks one of the lowest rates since the late 1960’s.  Analysts viewed the unemployment rate report as a big negative for the stock market as they said the report was not weak enough to deter the Fed from continuing to hike interest rates.  Senior economist Sam Bullard of Wells Fargo stated, “There’s no evidence to suggest the Fed should reduce the pace of rate hikes.”

The labor market may finally be cooling as the number of job openings in the U.S. sank to a 13-month low.   The Labor Department reported job openings in the U.S. fell to 10.1 million in August, down 1.1 million from July marking the second-largest monthly drop since records began.  The decline in job openings was the fourth in the last five months, and openings fell below 11 million for the first time since November 2021.  Also in the report, the number of people quitting their jobs rose by 100,000 to 4.16 million—not far from an all-time high.  The ‘quits rate’ is often used by analysts as another barometer of the labor market as its assumed that one would only leave a job in favor of a more lucrative one.   Chief economist Stephen Stanley of Amherst Pierpont Securities wrote in a note that the job-openings report shows signs of a cooling labor market but, “I will want to see another significant monthly decline in job openings before jumping fully on board with the notion of a loosening labor market,” he added.

A key barometer of American factory activity fell to a more than two-year low last month, as high inflation and rapidly rising interest rates weighed on demand.  The Institute for Supply Management (ISM) reported its manufacturing index declined 1.9 points to 50.9 in September.  Economists were expecting a reading of 52.0.  While numbers above 50 signify growth, the index has fallen sharply since earlier in the year.  Rising interest rates and higher prices are an increasing headwind for the economy.  While manufacturers report they are still growing for now, many report that they are adopting hiring freezes in anticipation of demand weakening further.   Timothy Fiore, chairman of the survey stated, “Companies are saying we don’t need as many employees.  That is a clear change compared to where we have been a year or a year and a half ago.”  Economists Oren Klachkin and Kathy Bostjancic at Oxford Economics wrote in a note to clients, “Manufacturing will lose more steam in the months ahead as slackening goods demand and weak business investment depress activity.”

In the vast ‘services’ side of the U.S. economy, ISM stated business conditions dipped in September, but employment remained strong.  ISM’s services index dipped to 56.7 in September but exceeded economists’ forecasts for a reading of 56.  In the details, the new orders index fell 1.2 points to 60.6, while production slipped 1.8 points to 59.1.  However, the employment barometer rose 2.8 points to 53.  Yet some companies reported they would be more cautious about hiring and rely more on temporary labor in case a recession ensues.  Of note, the prices-paid index, a measure of inflation, fell 2.8 points to 68.7.  That marks the fifth straight decline and the lowest level since the start of 2021.  Prices are still high and rising, executives said, but they are not rising as rapidly as they were earlier in the year.  Thomas Simons, economist at Jefferies, wrote in a note to clients, “All the details in this month’s report are encouraging, and they are consistent with our view that the economy was not in a recession in the first half of 2022, nor is it heading into one in the second half.”

International Economic News:  Despite some early signs of a slowing, economy Bank of Canada Governor Tiff Macklem said more interest rate hikes were necessary to bring inflation down.  Speaking to the Halifax Chamber of Commerce, Macklem said high inflation increasingly reflects domestic pressures on prices.  The governor said while global events such as the pandemic and the Russian invasion of Ukraine have fed into higher prices, demand is outpacing supply more broadly in the Canadian economy.  As the economy fully reopened in the spring, pent-up demand for services in sectors like travel and recreation began driving inflation even higher, he said.  When asked whether the bank's path to a "soft landing" has narrowed, Macklem said the bank's primary focus is restoring low and stable inflation.   "Our mandate is clear.  Our primary responsibility is price stability," he said.

Across the Atlantic, Deutsche Bank senior economist Sanjay Raja stated that since the bank’s last growth update “the UK economic outlook has weakened further.”  In a downbeat assessment, analysts at Deutsche Bank said UK GDP was due to take until 2024 to return to the level of December 2019 (before the pandemic struck).   Deutsche Bank said the government’s tax cuts and energy support scheme would help to add about 0.5% to UK GDP over the next year relative to its previous forecasts.  However, higher interest rates from the Bank of England would shave off close to 0.8% from GDP relative to its previous estimates.  “Tighter financial conditions … will offset much of [the] gains from fiscal policy,” Raja added.

On Europe’s mainland, the French government announced a package of measures this week aimed at cutting the country's energy consumption by 10% in the hope of getting through the winter without power cuts.  Energy Transition Minister Agnes Pannier-Runacher stated the target was "only the first step" towards an objective of cutting energy use by 40% by 2050.  "Urgent action is needed," she said, calling for "a general mobilization" in favor of restraint in energy use which should lead to a 10% reduction in energy use within two years compared to its 2019 level.   The energy plan comes a day after the announcement that French gas reserves are at 100% but experts warn this may not be enough, depending on the severity of the coming winter.

German Chancellor Olaf Scholz announced a package worth 200 billion euros ($198 billion) designed to help with soaring energy prices.  The "defensive shield" includes a gas price brake and a cut in sales tax for fuel.  The proposals could cut 2 percentage points off inflation in the next year, but they are unlikely to prevent an economic contraction.  However, not all analysts view this as the best solution.  Christian Schulz, deputy chief European economist at Citi stated the package “may soften the coming recession but also poses risks.”   "The risk is that others may follow that example," Schulz said.  Schulz said Germany could "afford" any debt financing thanks to its low debt-to-GDP ratio and lower external funding needs, but the package could open the door for less fiscally prudent countries to want to borrow large amounts and issue new debt.

In Asia, Chinese President Xi Jinping is expected to appoint one of his closest allies as economic czar as he prepares to kick off a third term at the helm of the Communist Party.  According to a source familiar with Chinese politics, He Lifeng is like a “brother” to Xi.  He Lifeng, chair of the powerful National Reform and Development Commission (NDRC), is seen as a likely successor to Vice Premier Liu He, Xi's current economic policy chief.  Liu He is expected to retire after a party congress in mid-October.   Lifeng, 67, has worked with Xi for decades.  His star rose when Xi was governor of Fujian in the early 2000s.  He took over as NDRC chief in 2014, just two years after Xi came into power and in 2018 was promoted to deputy chair of the Chinese People’s Political Consultative Conference (CPPCC), the top state advisory body.  The move is seen as a further expansion of Xi’s involvement in China’s macroeconomic policies.

Japan will take "unprecedented" measures to curb rising electricity bills for households and businesses as a weak yen fans inflation and global recession fears pose big risks to the economy, Prime Minister Fumio Kishida said.  The government will compile another economic stimulus plan by the end of October, including a rare measure to directly ease the rise of electricity prices that are subject to abrupt price flare-ups, Kishida told parliament.  In the past, the government has paid subsidies to fuel wholesalers to keep gasoline and kerosene prices low, but now policymakers are floating new ideas such as providing cash payouts and giving subsidies to utility firms to curb power price hikes.  The government is also considering a subsidy scheme for consumer and industrial gas in the upcoming package, which would further increase the size of the fiscal payout involved, Japanese news agency Kyodo reported.

Finally:  REITs, or Real Estate Investment Trusts, are considered by many to be an essential holding in a well-diversified portfolio.   However, many REITs, especially those specializing in commercial real estate such as office buildings, have been horrifically damaged by the dramatic drop in demand for office space throughout the US.  One of the most widely-held REITs operating in this space is the Vornado Realty Trust (VNO), which has a very heavy presence in the office space markets of New York City, Chicago and San Francisco.  Despite paying a hefty dividend, the stock has fallen dramatically, down about 75% from its all-time high and now trading where it first traded in 1997, 25 years ago.  (Chart from wolfstreet.com) 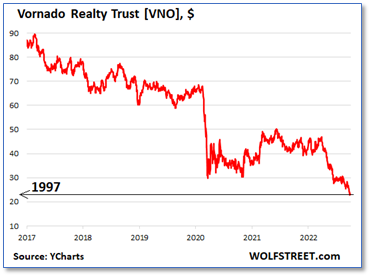